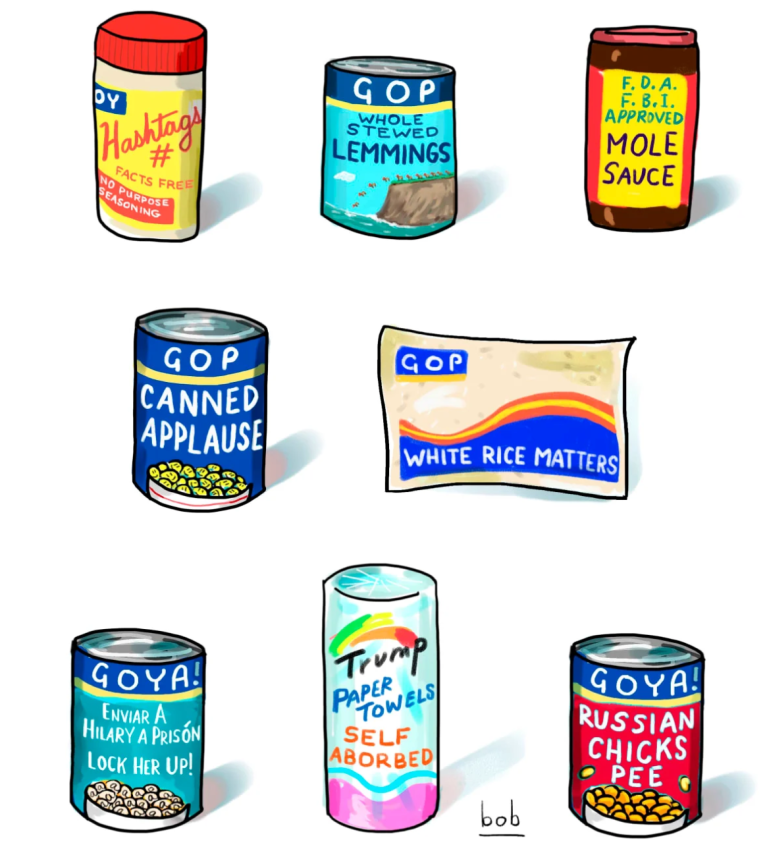 Robert Unanue has every right to love Donald Trump if he wants to. But with rights come responsibilities, like owning up to the consequences.

An Op-Ed piece by Ruben Navarrette Jr. for The Daily Beast.

It’s easy to have a knee-jerk opinion about what I’m calling the “Goycott.” It’s harder to fully understand the controversy.

The Goycott is the threatened boycott by Latinos of Goya Foods, the largest Hispanic-owned food company in the United States.

Notice I said “Hispanic” and not “Latino.” Don Prudencio Unanue and his wife, Carolina, migrated from Spain to Puerto Rico and then to the United States, where they founded the company in Manhattan in 1936. The Spanish are considered “Hispanic” but not “Latino.” That seemingly minor detail will become important later on in this story.

Understanding the Goycott can be difficult if you’re not Latino—or even if you are Latino, but not fortunate enough to be Mexican American or Mexican. That subgroup, with roots south of the border, makes up more than 60 percent of the U.S. Latino population.

It is also one of President Trump’s favorite piñatas. The hits on Mexicans have kept on coming since June 2015. That’s when the real-estate mogul launched his presidential bid and revved up white supporters by essentially calling my Mexican grandfather a rapist, criminal, and drug trafficker.

If you’re curious, my grandpa entered the United States legally from Chihuahua, Mexico, as a boy during the Mexican Revolution (1910-1920). Generally speaking, migrants couldn’t come illegally until after the Immigration Act of 1924, which created quotas based on national origin.

Mexicans, and Mexican Americans, are a proud people. And many of us take extreme offense at being treated as a prop by Trump.

So much so that if you visit the White House, step into the Rose Garden, stand at a podium and praise Trump, we’ll come after you. Especially if you’re Latino and got rich off the backs of Mexican customers.

Goya Foods claims to have more than 2,500 products. Step into any supermarket in the Southwest, and look down the aisles. The brand is ubiquitous in the Sun Belt. Wherever you find Mexicans, you’ll find Goya.

In Spanish, “Don” is a term of respect. The same kind of respect that Prudencio’s grandson Robert—the current CEO of the company who has a personal net worth estimated at $1.1 billion— last week denied to his Mexican and Mexican-American customer base. The slap in the face came when Unanue appeared at the White House, stepped into the Rose Garden, stood at a podium, and uttered 19 words that sparked the Goycott:

“We are truly blessed, at the same time, to have a leader like President Trump who is a builder.”

As the kids say: As if. The only thing Trump is building at the moment is a presidential legacy of incompetence, callousness, racism, and division. And, to the degree that there is any building going on at any Trump property around the country at this moment, Immigration and Customs Enforcement would—because of past hiring practices of other Trump properties—be wise to pop in and check the papers of those who are actually swinging the hammers.

With those 19 words, Unanue—the grandson, not of a poor farm worker, like I am, but of a “Don” who launched a successful company, the kind of person who, as the saying goes, was born on third base but prances around like he hit a triple—told the world he knows a lot more about groceries than politics.

Even if a boycott isn’t successful, the company still has a marketing and public-relations disaster on its hands. Roberto, cleanup on Aisle 4.

How did we get here? Maybe Unanue and the unwashed masses–what Mexicans derisively call the “plebe”—who helped him go from rich to super-rich were always on a collision course.

When much of your money is inherited, as opposed to merited, you can’t relate to most Mexicans, and Mexican Americans, who work for a living. That may have been where Unanue first began to lose touch with his customers. You know, the folks who put food on his table.

I wonder what white people think of all this. They probably see a boycott of Goya products as just the latest example of our “cancel culture.” It’s not. For Latinos, not all of whom support the Goycott, this messy food fight is about a lot more.

The Goycott, and the controversy over it, is about at least five things: the split between different types of Hispanics/Latinos; the idea that, when you go to the White House, you dance with who brought you; the fact that Trump does, despite his demagoguery, enjoy substantial Latino support and could get as much as 33 percent of the Latino vote in November; the fact that Hispanics/Latinos are famously eager to pull one another down; and the fact that Mexicans, and Mexican Americans, in particular, expect to be betrayed by one of their own.

What I want to know is why so many white folks on social media are so upset about the threat of a Goya boycott. This isn’t their fight.

Besides, they don’t have a leg to stand on if they supported efforts by MAGA conservatives in recent years to boycott dozens of left-leaning companies, from Nike to Starbucks to Amazon to Netflix.

Still, Goya has its defenders.

On his Saturday show, CNN’s Michael Smerconish referred to the boycott and lamented that “beans” have become “part of the partisan divide” and asked viewers to weigh in on the question: “Has cancel culture gone too far?”

Meghan McCain, the token conservative on The View, tweeted that the boycott was “weird and callous” given that Goya employs thousands of people and donates food at times of crisis.

I’m curious. Why would white folks, many of whom probably don’t know Goya from gumbo, be so eager to stick their noses into this Latino feud? There are a number of possibilities: They’re sick of the cancel culture; they’re burned out on “wokeness” and political correctness; they’ve had their fill lately of people of color kicking up a fuss; they really do need to run everything in sight; and/or they’re afraid of Latinos—the nation’s largest minority, the most important group of swing voters, with a GDP of $2.3 trillion—and prefer that they remain passive and compliant.

Meanwhile, Unanue told Fox News that he won’t apologize for praising Trump and insisted the boycott amounts to “suppression of speech.”

This guy is full of beans. Unanue can say whatever he wants, about whomever he wants. He can vote however he pleases. But maybe here’s a lesson that Richie Rich didn’t learn in private school: With the exercise of rights come responsibilities, chief among them the task of owning up to the consequences of your words and deeds. He has every right to say what he said, but people who don’t like what he said have every right to boycott his company. That’s not cancel culture. That’s accountability.

Gorging on the attention, Unanue had a satisfying meal. Now it’s time to pay the bill.

3 thoughts on “This Isn’t ‘Cancel Culture.’ The Goya CEO Is Just a Moron.”