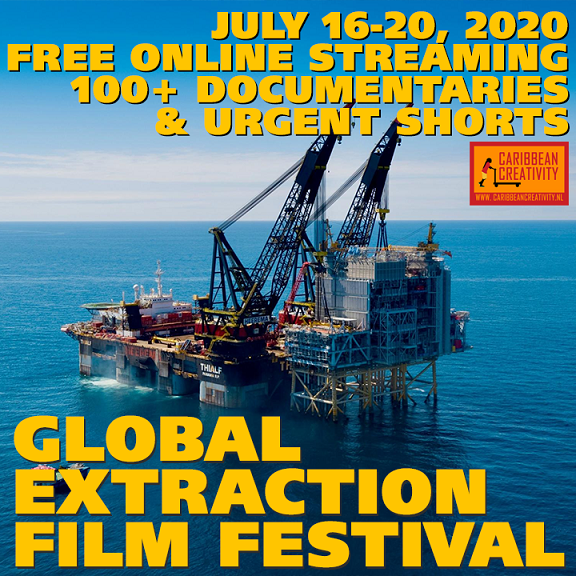 The First Global Extraction Film Festival 2020 streaming online from July 16-20, 2020, is FREE to the public worldwide at www.caribbeancreativity.nl. Hosted by Vagabond Media & Caribbean Creativity, the festival features over 100 documentaries and urgent shorts. Curated by Jamaican environmental filmmaker, writer, and linguist Esther Figueroa; in collaboration with professor of Media Studies Emiel Martens, founder and chairman of Caribbean Creativity, based in the Netherlands; “GEFF 2020 is part of a movement to bring attention to both long standing and newly evolving threats from global extraction.” The program also includes the world premiere of Fly Me to the Moon, Figueroa’s feature documentary about modernity and the global aluminum industry. See more information below.

FOCUS ON GLOBAL EXTRACTION * GEFF PROGRAM ONE features a selection of over 20 documentaries focused on all the regions of the world, with a wide range of topics demonstrating the all-encompassing and intersectional nature of global extraction and exploitation. From the military industrial complex and colonial occupation, to mining, tourism, industrial agriculture, factory farms, climate crisis, plastics, waste, forests, soil, forced labor, fossil fuels, smart-technology, and the rights of nature.

GEFF PROGRAM ONE includes the world premiere of Fly Me to the Moon, Esther Figueroa’s feature documentary about modernity and the global aluminum industry, as well as many award-winning feature documentaries, such as Adam Horowitz’s Nuclear Savages, Deia Schlosberg’s The Story of Plastic, Stephanie Soechtig & Jason Lindsey’s Tapped, Franny Armstrong’s Drowned Out, Jordon Brown’s Stare into the Lights My Pretties, and Anne Keala Kelly’s Noho Hewa: The Wrongful Occupation of Hawai’i.

URGENT SHORTS * GEFF PROGRAM TWO presents an educational overview of why we should #FocusOnGlobalExtraction and take #GlobalExtractionAction. A text written by Esther Figueroa is accompanied by links to 40 Urgent Shorts including testimonials from people impacted by extraction and exploitation, media produced by grass-roots and international activist organizations, news outlets and short documentaries. Accompanying the Urgent Shorts program is a bonus list by topic of links to 70 extraction related documentaries, testimonials, news programming and shorts, including extensive links to media about environmental justice. All media featured in the URGENT SHORTS * GEFF PROGRAM TWO are publicly available online and can be accessed at anytime, not just during GEFF 2020.

On 16 July, the United States of America will celebrate the 51st anniversary of NASA’s launch of Apollo 11, and on 20 July, the moon landing. On 30 June, 2020, SpaceX a private company owned by Elon Musk, launched a US military Space Force satellite, one of dozens of military and commercial satellites launched by the company since 2013. SpaceX is also currently developing flights to the Moon and Mars. As the US, China, Japan and other countries, as well as privately owned companies, pursue a new era of mineral extractive space exploration, the First Global Extraction Film Festival is held to reflect on the destructive impacts of hundreds of years of extractive industries on Planet Earth.