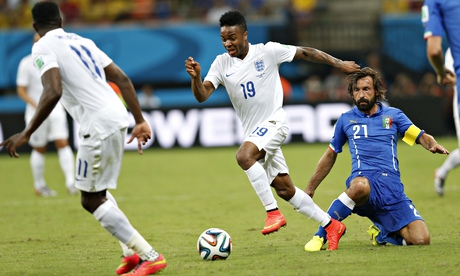 Natalie Weiner of LargeUp states that “while no Caribbean teams made it to football’s most important match this year, there are still plenty of representatives of the islands out on the field.” She has identified eight football superstars with Caribbean roots who are present at the Football (Soccer) World Cup currently taking place in Brazil. They are:

Read brief profiles of these eight players at http://www.largeup.com/2014/06/12/a-caribbean-guide-to-the-world-cup.

And even with these additions, the list is probably still incomplete. It also depends on how one defines ‘roots’. And of course, depending on one’s definition of the Caribbean, one could also count some if not all players of Colombia, Costa Rica, Honduras, and Mexico as Caribbean representatives in Brazil 2014 (all four of these countries are members of the Association of Caribbean States).

On Saturday June 14, in the match between England and Italy (final: 1-2), England’s 19- year-old Jamaican-born winger Raheem Sterling “was a breath of fresh air, attacking without fear, taking people on, going for goal,” according to the Daily Mail’s Rio Ferdinand. “His pass to Wayne Rooney that Rooney then crossed superbly to Daniel Sturridge for 1-1 was a peach. And his early shot on goal from distance that rippled the side netting rather than ending up in the back of the net was the kind of effort that makes you get out of your seat.” Source: http://www.dailymail.co.uk/sport/worldcup2014/article-2657912/RIO-FERDINAND-Its-Uruguay-Luis-Suarez-blanked-Steven-Gerrard.html And according to The Guardian’s Barney Ronay, Sterling “gave a fine, nimble-footed display in the first hour and beyond, not just of driving speed and quick-footed dribbling but of measured passing and vision with and without the ball. Source: http://www.theguardian.com/football/blog/2014/jun/15/raheem-sterling-hodgson-england-italy