Trinidad and Tobago’s distinctive nineteenth-century architecture survives not only in grand mansions, but in many more modest old houses that linger in the rural landscape. Photographer Chris Anderson captures their faded elegance for Caribbean Beat, while writer Angelo Bissessarsingh explains what makes them unique.  (For more photos by Chris Anderson, visit his website http://www.caribbeanphotoart.com.)

In islands like Jamaica and Barbados, the great sugar plantocracies of the eighteenth and nineteenth centuries spawned imposing mansions with thick walls of hand-hewn limestone and rampart roofs like medieval castles. Trinidad and Tobago have few of those. Instead, the pragmatic needs of plantation life melded seamlessly with the subtle accents of a heritage that was heavily influenced by an influx of French settlers, beginning in 1783. This cultural fusion combined with native materials to create a signature architectural style.

This stamp of originality was emphasised after 1880, when a young Scottish architect and builder named George Brown settled in the island. A man with an eye for elegance, Brown set about organising a production line which churned out myriad patterns of delicate wooden filigree fretwork — a hit with homeowners, from lordly sugar and cocoa planters to humble peasant farmers.

Though rapidly succumbing to the ravages of time, the quaint homes of yesteryear are still very much a part of Trinidad’s landscape. There is an errant cosy atmosphere to these old homes that cannot fully be replicated in a modern structure. It is the aroma of old, moist wood that has been lovingly wallpapered within, and which has been renewed with a Christmas coat of whitewash every year for three generations. These buildings are cool during the sultry days of Trinidad’s equatorial climate, with steeply pitched roofs and dormer windows filtering every breeze.

Moreover, old family homes capture the spirit of those who have been born, raised, and who ended their days within the walls. From the welcoming double-panel French doors to the bygone memory of children playing between the raised pillars below, echoes of an era gone still can be heard. 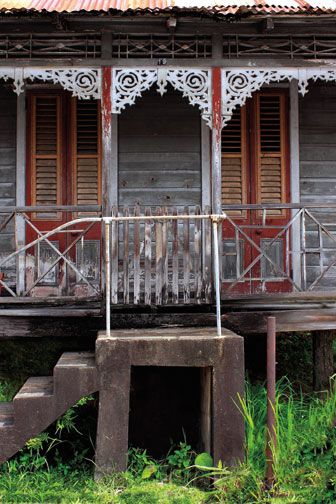 2. Near Cunaripa, south of Sangre Grande in east Trinidad

5. San Fernando, south Trinidad (torn down since it was photographed)