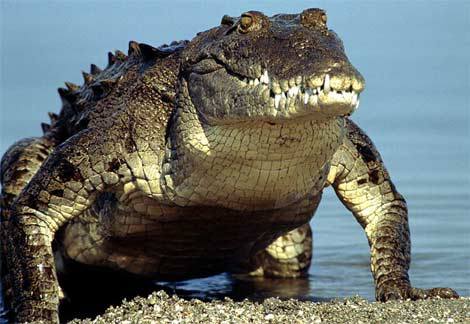 EVERYTHING you always wanted to know about crocodiles in the Bahamas is contained in a paper recently published in the Florida Museum of Natural History’s scientific bulletin, Larry King reports for tribune242.com.

The paper was written by Gary Morgan, a top fossil collector at the New Mexico Museum of Natural History, and Nancy Albury, who is Abaco manager and curator of paleontology for the Antiquities, Monuments & Museums Corporation of the Bahamas.

Albury has coordinated Abaco’s famous Sawmill Sink Fossil Project since its inception in 2005. She has been exploring and researching Bahamian caves for more than 30 years. One of her goals is to help raise public awareness of the fragility of these cave systems, so they can be protected.

Sawmill Sink is an inland blue hole in south central Abaco that extends 150 feet below sea level, and then spreads out into miles of horizontal passages. Scientists have spent the last eight years investigating a treasure-trove of fossils found in its depths – all perfectly preserved by the cavern’s unique water chemistry.

Top cave diver Brian Kakuk made the initial discovery of fossils in Sawmill Sink in 2004, and has led most of the dives to collect fossils since. He also collaborated with Albury on protocols for documenting and collecting fragile vertebrate fossils underwater.

Morgan and Albury note that, in addition to Sawmill Sink, five other sites on Abaco have yielded crocodile fossils. Dan’s Cave, Nancy’s Cave, Ralph’s Cave and Lost Reel Cave are all inland blue holes, whereas Gilpin Point is a peat deposit preserved within a sandy shoreline south of Crossing Rocks.

These discoveries have attracted considerable international attention. The exploration and research has been funded by the AMMC, the Florida Museum of Natural History, the National Geographic Society, the Wildlife Conservation Society, and private donors.

But not everyone is aware that crocodiles were once common in the Bahamas – until they were hunted to extinction in historical times. Abaco’s Sawmill Sink blue hole has yielded the largest sample of prehistoric crocodiles so far known in the region – more than 50 individuals – including skulls and skeletons that date back thousands of years.

“Their incredible preservation suggests that after death the crocodile carcasses came to rest on the sediment cone of peat and were not disturbed by scavengers,” wrote Morgan and Albury. “The soft tissue decomposed and the skeletons were buried in the peat and preserved in place with little or no movement in the quiet water.”

These giant toothsome lizards have been identified as Crocodylus rhombifer, which is found alive today only in a small area of southern Cuba and on the Isle of Pines off the southwestern Cuban coast. Just a few thousand of these endangered animals survive in the Cuban swamps.

The Sawmill Sink investigations have turned up the remains of reptiles, birds and mammals that once roamed the prehistoric Abaconian landscape, not to mention fossilised plants, pollen and spores. Among these finds are bones from a Lucayan child dated to about a thousand years ago – the oldest human remains yet found in the Bahamas.

Scientists assume that grasslands with scrub thickets covered most of the Bahamas during the last ice age, based on the pollen and bird fossils found in Sawmill Sink. Some 25 species of birds are represented (including burrowing owls, meadowlarks, plovers, quail-doves, Cuban crows, nighthawks, and caracaras) as well as smaller samples of fish, lizards, snakes, bats, and the Bahamian hutia.

As well, the Morgan-Albury paper notes that Columbus reported the killing of a 6-foot crocodile in a freshwater lagoon on Crooked Island in October 1492. Martín Pinzón, captain of the Pinta, killed a second crocodile of similar size on Crooked Island the next day, and the skins of both animals (described as serpents) were taken back to Spain.

“I think there are many such serpents in these lagoons,” Columbus wrote in his log. “The people here eat them and the meat is white and tastes like chicken.”

There are also reports of Bahamian “alligators” in travelogues by Peter Henry Bruce in 1782 and Daniel McKinnen in 1804. McKinnen specifically mentioned “alligators” from Acklins. And in 1886 John Gardiner, an advisor to the Board of Agriculture, reported an 8-foot “alligator” on Inagua.

“It is highly unlikely that the historical accounts actually refer to alligators, which occur in Florida but nowhere in the West Indies, and instead almost certainly pertain to crocodiles,” Morgan and Albury wrote, noting that “the Cuban crocodile is one of the most terrestrial of all living crocodilians.”

They point out that Crocodylus rhombifer was also once plentiful on Grand Cayman. In fact, the Spanish word “caimán” (from the Amerindian “cayman”) is one of several terms applied to tropical American crocodiles. So the Spanish name for this territory – “Islas Caimán” – can be roughly translated as the “Crocodile Islands.”

The earliest reference to Cayman crocodiles was in an account of the 1586 voyage of Sir Francis Drake: “There weare Crocadiles which did Incounter & fighte with vs, they live bothe in the sea & on lande. Wee tooke divers & made verie good meate of them; some of the same weare ten foote in lenghte.” Drake killed as many animals as he could, then “set the woods on fire and soe departed.” This was the beginning of the end for Cayman’s crocodiles.

Other historical records show that these giant reptiles inhabited Grand Cayman until at least the late 18th century, when they were eliminated by European colonists.The islands are believed to have been uninhabited before the arrival of Columbus in 1503.

Morgan and Albury think that Crocodylus rhombifer dispersed from Cuba to The Bahamas during a glacial period, when sea levels were much lower and overwater distances greatly reduced. About 20,000 years ago, they say, sea levels were as much as 360 feet lower than at present, and many of the smaller islands in The Bahamas were contiguous.

Back then, the northern coast of Cuba and the southern edge of the Great Bahama Bank were separated by only a few miles. The bank was a vast swampy area, especially south and west of Andros. However, to reach Grand Cayman from Cuba involved an open ocean journey of some 150 miles.

Scientists have long known about the extinctions of large land mammals around the world within the past 50,000 years, which has been attributed to both climate change and overkill by humans. Some believe these exitinctions are merely “the opening act of an ongoing, anthopogenic decimation of the biosphere” that could develop into a mass extinction rivalling those of the geological past.

Large animals have disappeared wherever humans spread across the globe, beginning in Australia about 50 millennia ago. This was followed by extinctions in the Americas and on islands such as Madagascar, New Zealand, and in the Caribbean as they were colonised by humans.

The West Indian extinctions occurred up to the colonial period, and affected a wider range of animals – including seals, monkeys, giant hutias, spiny rats, giant sloths, birds, and larger reptiles – especially land tortoises, rock iguanas and crocodiles. These extinctions coincide with the arrival of Amerindians in the region, beginning about 5,000 years ago.

“The Lucayans did not reach the Bahamas until about 1200 years ago,” Morgan and Albury write. “After the disappearance of the Lucayans in the early 1500s, crocodiles survived in The Bahamas for another 400 years (becoming) extinct in the late 19th century, almost certainly as a result of human hunting, first by the Lucayans and later by Europeans.”

No fossil footprints or tracks of vertebrates are known from The Bahamas, but most of the underwater blue hole sites on Abaco contain at least a few crocodile coprolites, or fossilised dung. And several shells of the large extinct land tortoise from Sawmill Sink carry bite marks that correspond in size and shape to crocodile teeth.

“The fossil and archaeological record suggests that crocodiles were essentially ubiquitous throughout The Bahamas before the arrival of Amerindians about 1,200 years ago,” Morgan and Albury write. “They must have been able to tolerate saltwater long enough to cross the Old Bahama Channel, a trip that would have taken only a few days.”

The recovery of well-preserved human and animal fossils from blue holes on Abaco and elsewhere has revolutionised our understanding of the early Bahamian environment. And the publicity value of Bahamian blue holes cannot be underestimated.

Albury and Kakuk are among those pushing for a five-square-mile chunk of land to be set aside on South Abaco to protect a series of inland blue holes and underwater caverns – including Sawmill Sink. These combined systems represent more than 10 miles of some of the most scientifically significant underwater passages on earth, with thousands of feet of new passages being discovered every month.

The proposal is currently under review by the Ministry of the Environment.

The Cuban Crocodile (Crocodylus Rhombifer) from late Quaternary Fossil Deposits In The Bahamas And Cayman Islands by Gary S. Morgan and Nancy A. Albury (http://www.flmnh.ufl.edu/bulletin/vol52no3.pdf

For the original report go to http://www.tribune242.com/news/2013/aug/07/tough-call-crocodiles-bahamas/

3 thoughts on “Tough Call: Crocodiles In The Bahamas”