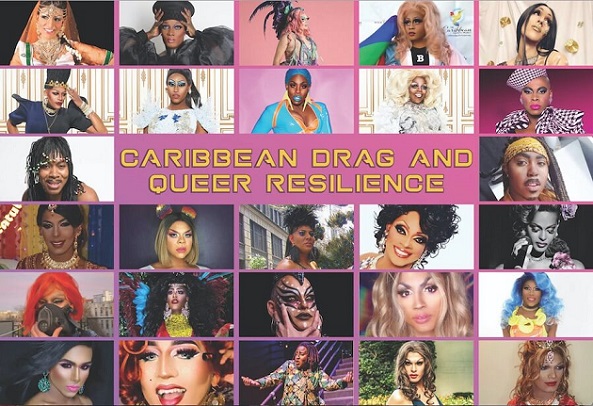 [Many thanks to Peter Jordens for bringing this item to our attention.] Ryan Persadie (Gay City News) introduces eighteen drag artists from Caribbean backgrounds who shared their perspectives on the meaning and urgency of their work with the Caribbean Equality Project.

The Global North often imagines — and continues to position — the Caribbean as an ongoing site of queer death, violence, and impossibility. Legacies of colonial buggery laws, ongoing and escalating rates of queer and trans hate crimes, and nationalist politics within the region that privilege the cisgender heterosexual as always the ideal citizen work to position gender and sexual difference as always marginal and outside the space of Caribbeanness.

In addition, myriad articles and Western news outlets work to amplify narratives and mythologies that Caribbean nations — specifically, countries such as Jamaica, Trinidad and Tobago, Barbados, and the Bahamas — are “the most homophobic places on Earth” and often need to be “saved” through the lessons of the “free” queers of the North to achieve queer modernity.

These messages of homohegemony are further exacerbated by popular queer media and cultural productions, such as “RuPaul’s Drag Race” “and “Gaycation,” that suggest “legitimate,” “authentic,” and “valid” forms of queer life are only to be found within the “safe havens” of diaspora. From this perspective, places such as the US, Canada, and Europe offer landscapes of freedom, liberation, and safety. Thus, Caribbeanness and queerness become incompatible.

For instance, in a recent 2020 episode of “Canada’s Drag Race,” contestant Anastarzia Anaquway, a Bahamian-Canadian drag queen, shared a moment that amplified these imaginings of queer Caribbean life. She explained that while living in the Bahamas, she was shot in a homophobic attack and almost died. During this segment, she went on to sing the praises of Canada, explaining that the process of seeking asylum was quite easy for her, providing her with space to live queerly without threat of violence.

As many queer and trans Caribbean communities know and experience, however, the Global North is far from a space of liberation and freedom for Black, Indigenous, and other people of color. Mainstream queer spaces, programming, and services often work through frameworks that privilege the histories, challenges, and narratives of white, cisgender, LGBTQI+ communities that often bifurcate the complexities of race, gender, class, ability, religion, and other vectors of experience that shape queer and trans Caribbean lives. For this reason, Caribbean-centric organizations such as Barbados Gay and Lesbians Against Discrimination (BGLAD), the Jamaican Forum for Lesbians, All-Sexuals and Gays (JFLAG), the Society Against Sexual Orientation Discrimination (SASOD) in Guyana, the Coalition Advocating for Inclusion of Sexual Orientation (CAISO) in Trinidad and Tobago, the Black Coalition for AIDS Prevention in Toronto, and the Caribbean Equality Project in New York have emerged. Engaging in critical and much-needed work to provide support and resources for the specific complexities of queer and trans Caribbean life, these organizations respond to gender-based violence, hate-crimes, mental health, social exclusion, housing, and legal challenges that specifically affect Caribbean communities. [. . .]

Using the “mash-up” as method, Caribbean drag critiques the notion that queerness and Caribbeanness cannot exist simultaneously. Instead, whether located in the region or in diaspora, these artists use their bodies to articulate forms of sexual diversity that speak a language all of their own — refusing the queer mainstream’s hegemonic vernacular. [. . .]

Emerging out of these legacies, contemporary Caribbean drag artists remind us what it means to cultivate embodied languages to speak our distinct histories and contemporary positions as well as to mount resistance and rehearse futures of anti-oppressive worlds to come. Eighteen Caribbean drag queens from across the US, Canada, and the Caribbean region speak here about what coalition and liberation work means to them. [. . .]