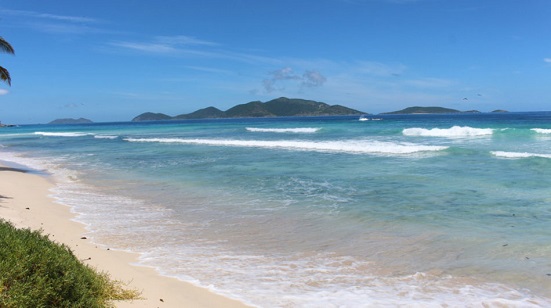 Yes, I have many hours ahead of me preparing materials for my lessons online… but I couldn’t help but get distracted by Caribbean Journal’s article on a Caribbean-style negroni called Il Trinitario (courtesy of a Dominican Republic resort) and Bob Curley’s invitation to listen to Caribbean music that will take us to the beach… To listen to the playlist music videos, visit Caribbean Journal. Here is Curley’s list of songs and descriptions:

Next to smell, there’s nothing like music to spark memories. So, while we can’t bring you the fragrance of Frangipani (or even suntan lotion), these 15 songs capture the memory of times spent relaxing on Caribbean beaches, drinking rum drinks at resort bars, and dancing at sunset on party boats.

Of course, the whole list could be Bob Marley and the Wailers tunes — and we really would have no problem with listening to Bob all day long — but we opted to include a range of songs that you almost certainly have heard if you’ve been to the Caribbean in the last few decades but might not know much about the artist or even the name of the song playing as the background of your island vacation. Big up to all the artists and here’s hoping the music takes you back to good times in the Caribbean!

Hot Hot Hot — Arrow: Thanks to MTV, many Americans of a certain age know the remake of this song by David Johansen (as Buster Poindexter) better than the original. But the song was born of the genius of Arrow, a calypso and soca star from the tiny Caribbean island of Montserrat.

Three Little Birds — Bob Marley and the Wailers: We literally could have included the entire catalog of this band on the list — One Love, Buffalo Soldier, Jammin’, Redemption Song (my favorite). But if there’s one song you’re nearly guaranteed to hear any day in the Caribbean, this is it.

The Boat Ride Anthem — Jason Benn and Pelf: We defy you to stay seated when this soca song starts playing and the winin’ start on a Caribbean party cruise.

Dollar Wine — Colin Lucas: I hear this song and immediately think of a conga line. Listen carefully and Trini soca artist Colin Lucas will even teach you how to “chip down de road.” The faster tempo remake by Soca Boys as “One Cent, Five Cent, Ten Cent, Dollar” a few years later was perhaps even more popular.

The Harder They Come — Jimmy Cliff: This song and the film of the same name are widely credited with introducing reggae to the world.

Follow the Leader — Soca Boys: Put yuh hands in the air and follow along with this distinctly Caribbean twist on the Electric Slide.

It Wasn’t Me — Shaggy: Shaggy’s inimitable singing style makes any of his songs instantly recognizable, including this irresistible tale of a playa who gets caught.

Chase the Devil — Max Romeo: You may or may not know this as the “put on the iron shirt” song. Jamaican reggae artists Max Romeo says the shirt represents the human strength of spirit needed to “cast out the devil” — perhaps right to outer space.

You Don’t Love Me (No, No, No) — Dawn Penn: Sixties rocksteady artist Dawn Penn scored a global comeback hit with this seductive dancehall song in 1994.

Big Bamboo — Horace Peterkin: Does anything say Caribbean vacation like a calypso ode to sexual prowess sung by the general manager (Horace Peterkin) of a Sandals resort in Jamaica? We think not.

Pressure Drop — Toots and the Maytals: This 1969 song by one of the kings of Jamaican ska and rocksteady music rode the soundtrack for The Harder They Come to worldwide fame, and is still commonly found on Caribbean resort playlists. The song title refers to the drop in barometric pressure that occurs when a hurricane is approaching.

For full article and playlist on Spotify, go to https://www.caribjournal.com/2020/04/20/a-caribbean-music-playlist-that-will-take-you-to-the-beach/