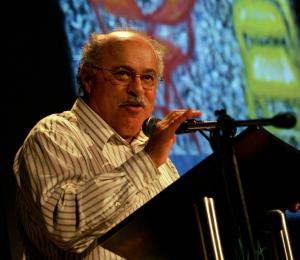 The highly-respected Puerto Rican scholar died on Tuesday in North Carolina, Carmen Dolores Hernández writes in this tribute in El Nuevo Día. Here’s a translation, with a link to the original Spanish article below, where you will also find a link to a tribute from Casa de las Américas.

We had arranged to meet in New york. He lived there; I was going on a brief visit to give a talk at Baruch.

“Let’s have coffee after your talk,” he had written in early November. “There’s much to talk about.”

We didn’t manage to meet; now we will never meet again. I didn’t make it to New York, nor will he return to the city in which he lived for decades and where he taught courses in social and cultural theory at NYU. Juan Flores dies on December 2 in a hospital in North Carolina, where he was offering a series of lectures at Duke University.

His legacy is boundless. In a dozen or so books and a large number of articles and essays he explored the subject of identity in a changing world. Insularismo e ideología burguesa (1980); Divided Borders: Essays on Puerto Rican Identity (1993); La venganza de Cortijo (1997); From Bomba to Hip-Hop: Puerto Rican Culture and Latino Identity (2000) delved into different modalities of being Puerto Rican and Caribbean and how these were changed by migration. InThe Diaspora Strikes Back. Caribeño Tales of Learning and Turning (2009), he reflected not only on migrants, but on the two poles of their trajectory: their places of origin and the societies to which they had relocated. He examined how new and complex identities forged in the Diaspora transformed both spaces due—in the case of the places of origin—to the migrants’ frequent returns or through their symbolic returns through remittances or cultural exchanges.

He thus helped us understand not only who we are and how we are, but where we are. “If it is true that the traditional concept of Puerto Rican identity, with its territorial underpinnings, was based on Caribbean creolization or a syncretic transculturation of indigenous, African and Iberian traditions,” he wrote for this newspaper’s Foro magazine, “the formation of a diasporic identity is rooted, in our times, in a comparable process of re-creolization, a new type and level of interaction and cultural fusion that includes the cultural experiences with which they come into contact. This is the meaning of the relationships of Puerto Ricans in the United States with other peoples from the Caribbean with different backgrounds, with other Latinos, with Asian-Americans, Italians, Irish, and Eastern Europeans, and above all, with African-Americans. These exchanges and convergences are not subordinated to the diasporic cultural formation: they are integral and defining of that formation. The Puerto Ricans “from here” (from the United States) are new Creoles not because of their cultural hybridity but because they are hybrid in new and complex ways.”

His thought captured the ever-changing dynamics of relations between ethnic, racial and national groups, between the metropolis and the periphery, between imperial centers and colonies, between the places occupied by a nationality. Flores understood that it is impossible to essentialize—immobilized, any identity.

His very own personal identity was a changing one. Born in New York, son of Puerto Rican scholar Ángel Flores, editor of important anthologies of Latin American short stories, he answered to the name “John” during his youth. His mother, Kate Flores, of Hungarian-Russian ancestry, wrote Relativity and Consciousness, a comparison of the theories of Einstein and Darwin.

“John” grew up among intellectuals and writers like Ciro Alegría, Octavio Paz, Rafael Alberti, Concha Meléndez and many others who visited his home often. But that wasn’t initially his chosen path. A youthful rebelliousness “without a cause” led his parents to take him to Switzerland, where the young man perfected the German language his mother had taught him. That was his chosen field at Yale, where he received his doctorate with a thesis entitled Poetry in East Germany. Adjustments, Visions and Provocations 1945-1970.

He taught literature at Stanford University in California, where he came into contact with Chicanos organizing politically at the end of the 60s and beginning of the 70s, demanding Chicano Studies programs. Flores became interested in such studies; he stopped being “John” to become Juan. “If I ever write a memoir,” he told me in an interview, “I will titled it ‘When I Wasn’t Puertorican’.”

That field has broadened thanks to his contributions. His death deprives us of a great Puerto Rican intellectual, of a lucid and non-conformist mind, of an exceptional scholar of Caribbean diasporas.

It deprives me of a solidary and unforgettable friend, always ready to understand the many identities that can be contained within the word “puertorriqueño”.

May he rest in peace.

For the original report go to http://www.elnuevodia.com/enmemoriadejuanfloresestudiosodelaidentidadpuertorriquena-1904083.html

Casa de las Américas has published a tribute to Juan Flores that you can access (in Spanish) here: http://laventana.casa.cult.cu/modules.php?name=News&file=article&sid=8430