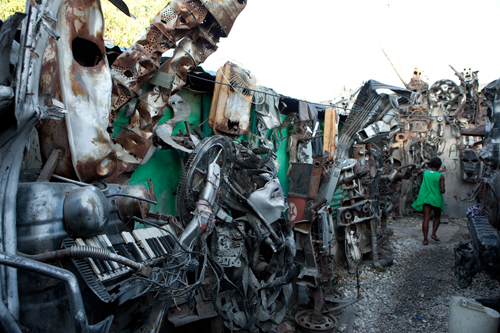 Carine Fabius reports on Port-au-Prince’s Ghetto Biennale in this article for The Huffington Post. See link below for original report and additional photos.

Grinning skulls — human ones; penises — always erect; rusted coiled metal springs bursting forth from disembodied torsos; burnt doll heads sitting atop bottles or twisted car parts, disturbing eyes shining still-innocent gazes. Powerful, humorous, sometimes scary, often fantastic, always intense, these are the sculptures that hold sway in the studios of an artist collective known as Atis Rezistans, also known as the sculptors of the Grand Rue (Grand Rue means Main Street). These artists’ studios sit like beacons in a small stretch of real estate off the Grand Rue — a “red zone” of minuscule living spaces with flimsy fabrics that pose as doors and paint buckets that double as toilets. Non-existent privacy, running water or electricity serve as backdrop for the daily hardship and surprising insouciance known as life in this part of town. It is also the setting for the 2nd Ghetto Biennale, as intense, mystifying, chaotic and inspiring an art biennale as you are likely to find anywhere on the planet Earth. Welcome to Haiti.

About a month ago I wrote about getting ready to go to the Ghetto Biennale, which took place this December in Port-au-Prince, and I wanted to report back on the event. The best way to begin is to relay the question posed by the GB’s website and press materials: “What happens when first world art rubs up against third world art? Does it bleed?”

What exactly did that question mean? Was it just bullshit contemporary art world lingo that sounded clever and nothing more, much as some consider the name of the Biennale itself? To be sure, I encountered plenty of people who hate the name for what it implies [to them]: that if it’s happening in Haiti, it has to be the ghetto; and, Can’t we get away from this negative imagery? I happen to like Ghetto Biennale. The artwork — made by the local artists from trash, junk and found objects in one of the poorest and challenging environments anywhere — is being created and exhibited in the ghetto. To me it says art cannot be contained; it happens everywhere, even in this ghetto. But, can’t we take it out of the ghetto and into an environment where the artists’ dire living circumstances don’t compete with the art being presented? And it is true that there is a “train wreck” component to the harsh alleyways and makeshift shacks that pass for streets and houses there. Someone suggested moving the Biennale to the newly reconstructed Iron Market, which may be food for thought as the organizers look to the third Biennale in 2013. But, back to this business of bleeding.

Many, if not most, of the visiting artists participating in the GB presented photography and video projects, conceptual works, performances, and workshops with community members and children. My sense is that through their artwork, many wanted to “help” in some way — whether through dialoguing with or involving locals in their creative process. Unfortunately, I never got to see the majority of the projects presented, partly because I couldn’t find them, and partly because after 90 minutes, an emergency situation developed and I had to leave the site (more on that later). So, in all honesty, I can’t say what I think about the works presented, or the efficacy of these well-intentioned artists in creating meaningful change through their ideas. What I can report on is my sculptor husband and GB participant Pascal Giacomini’s brush-up with the so-called third world artists. The organizers stipulated that all work exhibited had to be created on site, so I got to see first-hand how that question might be answered.

While the sculptors of the Grand Rue scavenge through the streets, junkyards and trash heaps for the elements that make up their pieces, Pascal buys most of his in metal supply shops and orders whatever else he needs online. For him, the scavenged parts and found objects he uses work as accents. His is a well-appointed atelier; the Grand Rue guys have a very limited number of tools. Pascal’s challenge was to create his art under their conditions. Working on the remains of a burned down shack abutting an alley regularly used by the teeming community, he produced three large-scale sculptures that reflected the environment from which they sprang while looking distinctly apart from the genre that is associated with the Grand Rue guys.

The emergency that spirited me away from the GB was an unfortunate fall sustained by a dear friend, who broke his pinky finger while trying to navigate the unsurfaced and uneven ghetto terrain. Off we sped to the nearest hospital, and thanks to a lucky break, within three hours, we were at the famed Hotel Oloffson, drinking potent rum sours and eating the divine local fare that’s got me worried when I look at my ass in the mirror. By then people had started streaming in from the GB. Word was that our friend had broken his arm (not his pinky) and that there was blood everywhere. Maybe the GB organizers were referring to Haiti’s hemorrhaging rumor machine! Just kidding. So what does happen to first and third world art when they meet? Do they bleed?

The concept of bleeding evokes many possible scenarios — waste, violence, pain, a weakening or loss; a result of friction. Or, a bleeding into something, as in a melding of… a gushing forth — of creativity or ideas; a blood pact; blood brothers.

My take is that the divergent art forms and worlds bled into something wonderful. The artists and others in the community became totally engaged in the development of the work, stopping by to see the progression on a daily basis (and to share in the beers he needed to keep going in the heat!). They threw out ideas, some of which were incorporated. One guy, in particular, insisted on knowing the sculptures’ names, which pressured Pascal to invent titles on the spot that made everyone burst into laughter (Albert, Marcel and Maria). And, based on the subtle requests for any leftover colored glass, I think he may have introduced the idea of color. Only time will tell. The pieces will stay there for a while — a reminder of the collaborative spirit that reigned as he worked — and eventually move on, one to a private residence, and two to the Hotel Oloffson. Stop by and see them sometime!

For the original report go to http://www.huffingtonpost.com/carine-fabius/creating-and-bleeding-in-_b_1174804.html