Antigua is preparing for its traditional Nelson’s Pursuit Race, held on Saturday, December 31, 2011, and hosted by the Antigua Yacht Club in English Harbour, Antigua.

Originally conceived as a fun event to add to the festive season, the race commemorates Lord Nelson’s famous pursuit of the French fleet under the command of Admiral Pierre Villeneuve across the Atlantic in 1805, culminating in the blockade of Cadiz and the subsequent battle of Trafalgar, Nelson’s greatest victory, during which he was tragically shot and mortally wounded by a French sniper. 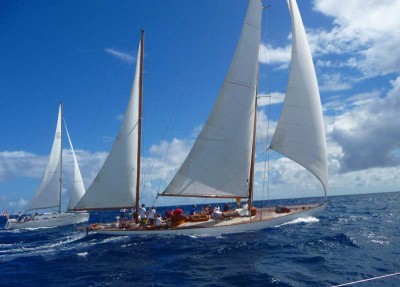 Prizes will be awarded on the same day, December 31, at 5:00pm at the Officer’s Quarters in the Nelson’s Dockyard. According to Richard Watson, winners receive beautifully crafted scrimshaw plaques. “Everyone gets a bottle of English Harbour rum and the prizes are handed out by the organizers in best period dress on the steps of the former officers’ quarters in Nelson’s Dockyard, as everyone congregates around the lawn, sampling copious quantities of Chippy’s famous rum punch. Later the restaurants and bars of English Harbour stay open into the early hours with live music and a fireworks display at midnight, courtesy of Antigua National Parks and local businesses.”

The Antigua Yacht Club is also the host of Antigua Sailing Week, the Antigua Classic Yacht Regatta, RORC Caribbean 600, and other events.

For photos (by Richard Watson) and additional information, see http://www.antiguanice.com/v2/client.php?id=386&news=3205