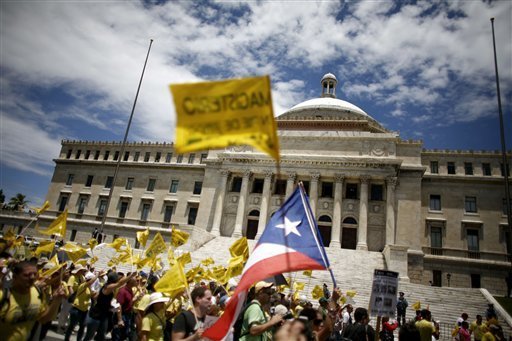 Teachers on Thursday staged a 24-hour strike and paralyzed Puerto Rican public education to protest what they say is a general deterioration of the school system, EFE reports. The strike is a protest against the aim of privatizing employee pensions, a shortage of teachers and the degradation of physical plant, the president of the FMPR union, Rafael Feliciano, told Efe on Thursday. “There is an effort on the part of the government to dismantle the public school (system) and discredit it,” Feliciano emphasized after participating in a demonstration in San Juan that concluded in front of the Capitol
The union leader said that the strike is designed to “sensitize” people to the aim of privatizing the system, but he added that that is just one of the problems afflicting Puerto Rico’s schools. Feliciano said that the government intends to partially privatize the system via Law 7, a measure conceived to reduce the U.S. commonwealth’s serious budget deficit and which already has led to the dismissal of thousands of public employees. “That law favors the dismissal of public employees from schools to hand over the system to private companies,” he said. Feliciano emphasized that another of the aims of Gov. Luis Fortuño’s administration is to privatize the retirement system. He said that another of the serious problems suffered by the system is a lack of teachers, a situation that affected about 100,000 students in at least one required course.
Feliciano emphasized the continuing seriousness of the situation of the 60,000 students in Special Education, of whom he complained that 45,000 lack teachers. The FMPR leader also said that teachers receive low salaries, noting that a public school teacher earns $2,600 per month before taxes. Feliciano said that another problem is the physical deterioration of the schools, many of which – he asserted – are not in the minimum shape to receive students.
Puerto Rico’s interim education secretary, Jesus Rivera Sánchez, said Thursday that paralyzing the system will not solve the problems in the sector. “More instability is created with today’s protest,” he said, after asking the teachers to reflect on their actions. The strike was called by the FMPR and UNETE unions.
The organizers of the protest, which is supported by the main opposition Popular Democratic Party, warned that if the government does not meet the teachers’ demands they will call for an open-ended strike starting in October. Puerto Rico’s public school system has 475,000 students being taught by 40,000 teachers at 1,517 schools.
The protest concluded with a demonstration in which hundreds of teachers participated, but the Education Department did not provide any estimates about how many teachers adhered to the strike.

For the original report go to http://www.laht.com/article.asp?ArticleId=364466&CategoryId=14092