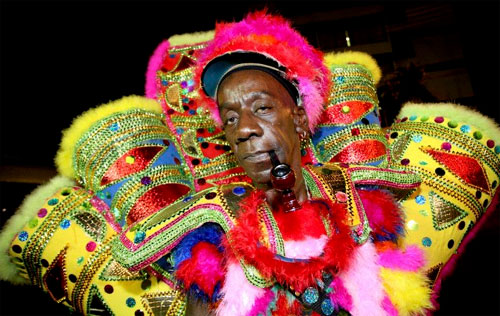 Caribbean Life News reports on Trinidad and Tobago’s carnival, which was described by Culture Minister Marlene Mc Donald as one of the best over the years although the carnival bands were much smaller in size. Government spent TT$35 million to host the “Greatest Show on Earth.” Here are excerpts from their report.

The celebration kicked off on Carnival Thursday night at the Queen’s Park Savannah, Port of Spain with the staging of the Kaisorama show.
Opposition MP Winston “Gypsy” Peters won the TT$100,000 extempo calypso final ahead of defending champion Joseph “Lingo” Ventoura La Placeliere. Last year Gypsy, who last won the extempo crown in 1997 when he had also won the Calypso Monarch title with “Little Black Boy” had placed second to Lingo in 2009. Gypsy beat a field of eight other competitors to take the extempo crown.
In the National Panorama Final on Saturday night PSC Silver Stars won the conventional large band category and retained their title. TheWoodbrook, Port of Spain-based band, led and arranged by Edwin Pouchet amassed 291 points – seven clear points head of its closest rival Petrotrin Phase 11 Groove- to win the TT$1 million prize and a challenge trophy. Third place went to another Port of Spain-based band, Neal & Massy Trinidad All Stars, which scored 282 points. Ten-time Panorama champs Witco Desperadoes, whose performance was also well-received by the large crowd, placed a disappointing seventh. Ten conventional bands took part in the large band category.
Calypso/soca singer Kurt Allen captured the Calypso Monarch title at the Dimanche Gras show on Sunday night. Singing in the last position (No 15), Allen sang “Too Bright” to collect the TT$500,000 first prize. His composition was about political leaders, who make stupid decisions as opposed to what the people would like to see. He said there is a perception the leader don’t’ like to listen to the people. Allen described his song as not being anti-government or anti-PNM. “‘Too Bright’ is just about looking at leaders who are supposed to be intelligent and examining the dumb thingsthey do,” he told reporters after winning the title. Allen dethroned reigning Calypso Monarch Hollis “Chalkdust” Liverpool, who placed sixth among the 15 finalists. Allen was a Calypso Monarch finalist in l994, l995, l996 and l997, before switching to soca for more than l0 years only to return to the Savannah on Dimanche Gras in 2008. He also composed the song “Heroes,” which won the 2001 Calypso Monarch for Denyse Plummer which ended in a controversy over the prize money.
Brian London took the second position with his song “A Calypsonian.” De Fosto won the third position with his song, “In a palace state of mind,” a composition about Prime Minister Patrick Manning’s multi-million dollar mansion and diplomatic center.

In the King and Queen of Bands competition the same night Curtis Eustace won a ninth King of Carnival title, breaking legendary mas man Peter Samuel’s 21-year-old record of most wins in the competition. Eustace won with the costume, “Spirits of Mandingo-An African Legend.” Eustace had come twice to breaking Samuel’s record, coming second in the competition in 2008 with a costume entitled “Chronic Chaos” and in 2009 with “Apollo’s Lust.” He first took the title in l997 with “D” Matador.’ Samuel last won the title in 2009 with “Lord of the Flies,’
Rosemarie Kuru-Jagessar, who portrayed “Waka-Nisha – the Sacred Water Bearer” took the Queen of Carnival title from 10 other competitors. Jason Williams and Ancil Issac Jr, going under the sobriquet “JW & Blaze” broke the International Soca Monarch record on Fantastic Friday night, becoming the first radio presenters to cop the Power Soca Monarch crown with the infectious song “Palance.” They dethroned last year’s winner Fay Ann Lyons-Alvarez, who had won both the Power and Groovy titles, while pregnant in 2009. This year, she placed second in both competitions.
Sherwyn Winchester was crowned Groovy Monarch and took home the TT$100,000 prize money. “Palance,” written and produced by Kernel Roberts, the son of the late Grand Master Lord Kitchener is set to also capture the Road March title.
For more go to http://www.caribbeanlifenews.com/articles/2010/02/18/news/caribbean/caribbeanlife-cl_news_caribbean-2010_02_17_azad_carnival_news.txt