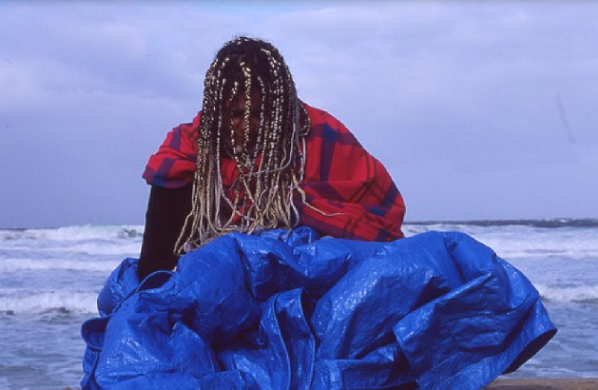 [Many thanks to Annalee Davis for bringing this item to our attention.] Barbados born artist Alberta Whittle is among the 10 artists to receive Turner Prize 2020 bursary awards from Tate Britain in place of this year’s Turner Prize. Here is a description from the artist’s page:

“Alberta Whittle is an artist, researcher and curator. She was a RAW Academie Fellow at RAW Material in Dakar in 2018 and is the Margaret Tait Award winner for 2018/9. She is a Committee Member at Transmission Gallery in Glasgow and a Board Member of SCAN (Scottish Creative Art Network).

The ten British artists who have received £10,000 bursaries from Tate Britain in place of this year’s Turner Prize have today been announced.

Tate Britain confirmed last month it would not stage a Turner Prize exhibition this year due to the pandemic. Instead, the Turner Prize jury selected 10 artists to receive bursaries – all of whom were deemed to have made “significant contributions” to contemporary art over the past 12 months. They are all eligible for the Turner prize in the future.

Alex Farquharson, Director of Tate Britain said: “Following a lively and rigorous virtual debate, the jury has settled on a list of ten fantastic artists who reflect the exceptional talent found in contemporary British art. From ceramics to film, performance to photography, they represent the many exciting and interdisciplinary ways that artists work today. These bursaries represent a vote of confidence in that work and offer some much-deserved support in challenging times. We’re extremely grateful to John Booth, Catherine Petitgas and The Ampersand Foundation who generously stepped forward at such short notice to make these bursaries possible.”

The members of the 2020 jury included Richard Birkett, Curator at Large at the Institute of Contemporary Arts, Sarah Munro, Director of BALTIC Centre for Contemporary Art, Duro Olowu, designer and curator and Fatoş Üstek, Director of Liverpool Biennial. The jury is chaired by Mr Farquharson.

The Turner Prize will return to its exhibition format in 2021.

This is the first time the often controversial prize has been cancelled in 20 years. It was created in 1984 but was not held in 1990 due to a lack of sponsorship. Normally, judges would have announced a shortlist for the prize in May, inviting the artists to make work for an exhibition opening in the autumn. The winner, who also takes home a £25,000 prize, would be announced in December. Last month Tate Britain, which organises the prize, said: “The tight timetable for preparing for the annual exhibition would not have been achievable under the present restrictions.”