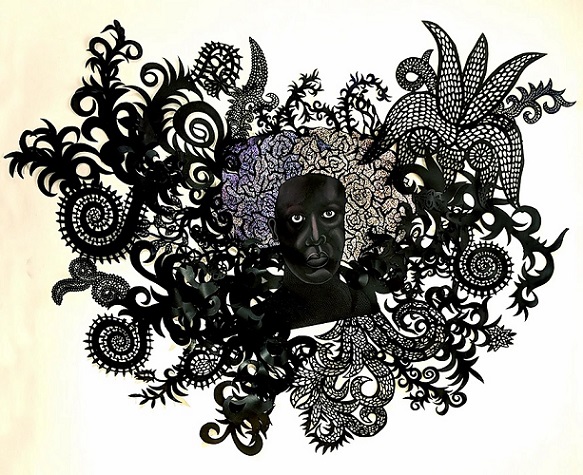 Curated by Rafael Damast, Venezuelan artist Henry Bermudez’s “Wilderness in Mind” will be on view through July 18, 2020, at Taller Puertorriqueño (Philadelphia, Pennsylvania).

For his show at Taller, Bermudez is presenting a site-specific installation in the center of the gallery representing a new avenue of investigation. The show also features rarely seen and recent work.

His paintings, drawings, and installations are elaborate and rich with distinctive patterns that reference the Amazon jungle and contain Mexican, Peruvian, and Afro Latino influences. Bermudez is a process-intensive artist who creates monumental works that are both organic and geometric. In recent years Bermudez’s work has become more overtly political in addressing the politics of race, beauty, climate change, and immigration.

In Philadelphia, Bermudez has flourished as a muralist, curator, and art instructor, currently teaching art at Fleisher Art Memorial and Career Academy Development Institute (CADI). He is also co-director at House Gallery1816 in Fishtown, where he maintains an active studio and exhibition schedule.

Henry Bermudez has had more than 31 solo shows and has exhibited internationally. In 1986 he was selected to represent Venezuela in the XLII Biennale di Venezia, in Venice, Italy. Having worked in the United State since 2003, he settled in Philadelphia in 2004.

Bermudez attended the National School of Art in Venezuela and was awarded a scholarship to the National School of Art “La Esmeralda” in Mexico City. He also studied at New York City’s Art Students’ League, as well as in Rome. Bermudez’s work has appeared in many exhibition catalogs, such as the X International Print and Drawing Exhibition of China.