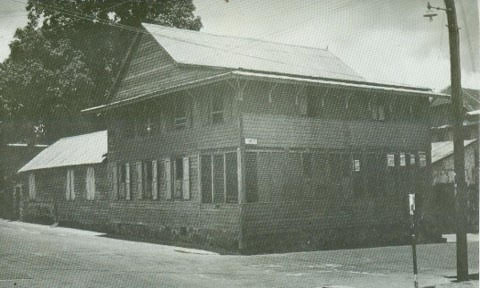 A report by Polly Pattullo

The childhood home of the writer Jean Rhys in the centre of Roseau, Dominica, has been demolished by its new owner. It is understood that a four-storey office block is to be put in its place.

The house, which stood on the corner of Queen Mary Street (now Independence Street) and Cork Street for perhaps 150 years, had been in a poor condition for some time, and was further damaged by Hurricane Maria in 2017. But those who treasure literary heritage will mourn its passing. 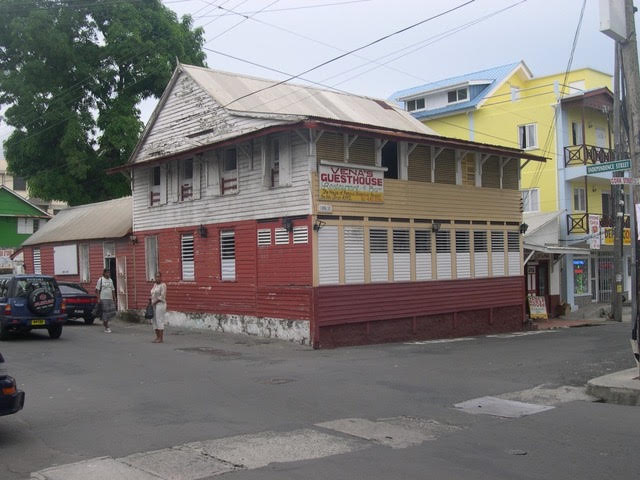 Rhys’ father, Dr Rees Williams, moved his family to the house soon after her birth in 1890. A Welshman, he had gone to Dominica to take up a government job as a medical officer and married Minna Lockhart, Rhys’ mother, whose Creole family with Scottish roots owned Geneva estate (the setting for parts of Wide Sargasso Sea) in the south of the island. A two-storey building, made of wood with a stone foundation, it was typical of Roseau’s fine colonial architecture. A yard was behind the house with a kitchen, stables and servants’ quarters, and separated from the street by a sturdy stone wall. A singe-storey annex became Dr Williams’ surgery. (Most recently, it became a tailor’s business run by Haitians.)

Rhys lived in this elegant home for the first 16 years of her life before she left for England in 1906. Her childhood memories of the house and the yard are described in her autobiographical fragment, Smile Please; they also feature in Voyage in the Dark, in ‘Heat’, the short story in the collection Sleep it Off, Lady, and in Tigers are Better Looking.

An imposing mango tree – at least 130 years old – is – as of 5 May – still standing in the yard and bearing fruit but it is doubtful that there will be a place for it in the new development. It, too, featured in Smile Please: ‘I walked out of the sun, into the shadow of the big mango tree. I laid the fair doll down… Then I searched for a big stone, brought it down with all my force on her face and heard the smashing sound with delight.’

Dominica seeped into the soul of her writing although she only returned once, in 1936, and on that occasion it is not known whether she visited her old home. Certainly, her letters from that time do not mention it.

When Dr Williams died in 1910, the property was bought by a member of the extensive Shillingford family who, much later, gave the house as a wedding gift to his daughter, Edelyn, on her marriage to “Sparrow” Winston.

The house retained its original features for many decades. Aileen Burton, whose family home was across the street, remembers the property in the 1960s: ‘It was such a beautiful Creole house filled with antique furniture and built to capture the natural elements of fresh air and ventilation through the jalousies while maintaining its privacy through half shutters on the windows. It was protected by full outer shutters which were opened every morning and closed on the ground flour every evening at 6pm. There were four large bedrooms upstairs. The main bedroom was opposite our house and had a large bed, a day bed and a separate dressing room. On the ground floor was the dining room and drawing room, both with well-polished wooden floors and glass cabinets filled with crockery and crystal. On the Cork and Queen Mary Street corner was a long closed verandah where, in the evenings, visitors would have tea. On Sunday mornings, at about 11am, my grand aunt would go over for an aperitif of a good rum punch.’

At carnival time, Ms Burton also remembers that the house was the starting point and refreshment venue for the Band Mulâtre, a group that was accompanied by a local jing ping band. On the Saturday before carnival, the Winston family hosted a famous ‘Samedi gwa’ dance, which was attended in style by the town’s bourgeoisie.

Another child’s memory comes from Anthony Toulon, a retired businessman, who has lived on Queen Mary Street for most of his life. ‘As a small boy in the 50s and 60s,’ he said, ‘I would go from our home into the Winston’s yard. I remember a cow pen, with two cows and a fierce bull. And one time I drank the hot milk squirted into my mouth from the teat of one of the cows.’ Mr Toulon adds that the house had a ‘nice feeling – like a traditional old Roseau home, with jalousies and a cool atmosphere.’

With the publication of Wide Sargasso Sea in 1966, Jean Rhys’ name became well known in literary circles worldwide, and visitors to Dominica had the opportunity to see the places, such as her home, that are associated with her life and writings. But a major change came on the death of Mr Winston in the early 1980s, and the house was sold to a inter-island trader called Vena McDougall, who turned the building into Vena’s Hotel. At that point much of the interior was adapted to accommodate guests: the cool drawing room was cut up into small rooms, and aluminium louvres replaced the wooden jalousies that Rhys had peeped through to see the happenings in the street. As she wrote in Voyage in the Dark: ‘I was watching them [the masqueraders] from between the slats in the jalousies dancing along dressed in red and blue and yellow, the women with their dark necks and arms covered with white powder, dancing along to concertina-music dressed in all the colours of the rainbow and the sky so blue.’

The yard, however, retained some of its charm, and in the 1980s it became a pleasant restaurant known as the World of Food. The huge mango tree still provided shade, and at that time a plaque associating Jean Rhys with the house was nailed to its base. It remained the only tribute to the writer. Harry Sealey was the restaurant manager at the time and remembers how people would come there because of its associations with Rhys. ‘The Dominican-born journalist and academic Edward Scobie would bring his students there,’ says Mr Sealey, ‘Tourist groups would also come and, in 1990, the cast of the UK television series, The Orchid House.’

With the destruction of the house, there is now little that physically remains of Jean Rhys’ Dominica. Her mother’s home, Geneva, is no more, nor is the house at Hampstead, in the north of the island, where she spent six weeks in 1936. Mr Toulon, who witnessed the recent demolition of her Roseau home, noted that the house had been strongly built. ‘It was sturdy. It took a while to take it down,’ he said.

As the Dominican historian Lennox Honychurch so presciently wrote in his book Historic Roseau, published in 2000, in commenting on the house and its literary associations: ‘Unfortunately, there is little to show inquisitive visitors. Soon perhaps there will be nothing….Once again, here in Roseau is an example of yet another lost opportunity to capitalise on our historical and, in this case, our significant literary connections.’

54 thoughts on “JEAN RHYS HOUSE in Roseau Has Been Demolished”