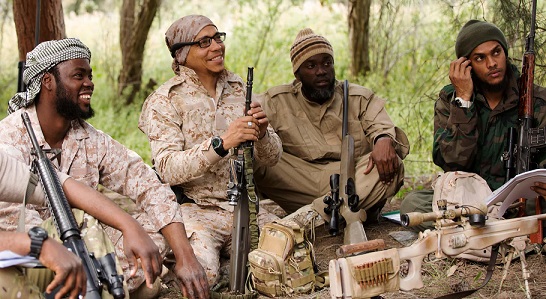 This article’s full title is “Trinidad’s jihadis: how tiny nation became Isis recruiting ground.” Written by Emma Graham-Harrison and Joshua Surtees for The Guardian, the article focuses on reasons why young Trinidadians are being drawn to join groups like Isis. Here are excerpts:

Five years ago, Tariq Abdul Haqq was one of Trinidad and Tobago’s most promising young boxers, a Commonwealth Games medallist with Olympic dreams. Now he lies dead somewhere in Iraq or Syria, buried in the ruins of the self-declared caliphate, along with dozens of his countrymen. Together they formed one of the most unlikely, and most underreported groups of fighters drawn to Isis.

The tiny Caribbean nation, with a population of just 1.3 million, lies about 10,000km from the former Isis capital in Raqqa. Yet at the bloody peak of the group’s power, Trinidad and Tobago had one of the highest recruitment rates in the world. More than 100 of its citizens left to join Islamic State, including about 70 men who planned to fight and die. They were joined by dozens of children and women, the latter including both willing and unwilling companions, security officials say. By way of comparison: Canada and the US, with populations many times larger, are each thought to have produced fewer than 300 recruits who made the journey east.

The power of this story – the flight from a balmy Caribbean island state rich in oil and gas to the frontlines of a desert war – was not lost on the propagandists of Isis.

Their Dabiq magazine, aimed at potential recruits and sympathisers, featured a long interview with fighter Abu Sa’d al-Trinidadi – formerly Shane Crawford – in the summer of 2016. He detailed his conversion, his trip to Syria and ended threatening death to Christians and bloodshed in the streets of his former home.

An unnerved Trinidad government raced to introduce new controls on travel and finance that would make the journey to any new jihadi project harder, and would track anyone attempting to return.

There has never been a terror attack on the islands, a plot uncovered, or even any formal Isis threat against Trinidad and Tobago. But the country now faces the possibility that citizens trained by Isis could return to radicalise a younger generation – or that would-be recruits no longer able to make that dark pilgrimage will seek other targets for extremism. [. . .]

Trinidad’s Muslims make up around one in 10 of the country’s population, and the overwhelming majority follow moderate forms of Islam. [. . .]

For many Trinidadian Isis recruits, religion was more excuse than driving motivation, said anthropologist Dylan Kerrigan, a lecturer at the University of the West Indies.

Young men, many of them recent converts, were drawn to the caliphate mostly by promises of money and a sense of community – an appeal similar to that of gangs in an increasingly violent country, he said.

“[A gang] provides a family, male role models, social order and it promises access to what many young men might think they want: money, power, women, respect,” said Kerrigan who has researched extremism for UN counter-terrorism units.

“[One] imam told me that instead of joining a local gang, some see traveling to the Middle East as like joining another gang.”

Al Rawi said a string of new measures, including intelligence sharing with the US, UK and Israel, mean it will be very hard for those who have left to slip back into Trinidad undetected.

People who knew some of the Isis volunteers say most of them – and some of their dependents – are dead. The only Trinidadians known to have returned to the island were a family group picked up from a Turkish refugee camp, after apparently trying and failing to reach Isis-held territory. They are now under close surveillance, Faris said. [. . .]

One thought on “Trinidad’s jihadis”