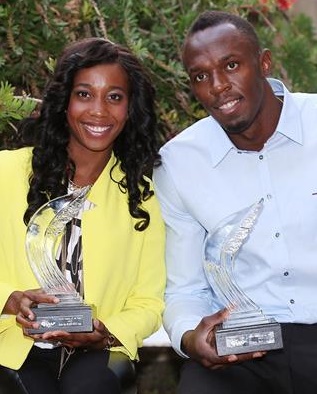 On the 55th anniversary celebration of Jamaica’s independence later this year, two Jamaican multiple Olympic gold medal winners—Usain Bolt and Shelly Ann Fraser Pryce—will be immortalized with the unveiling of statues at the National Stadium Statue Park in Kingston.

In acknowledgement of their outstanding contributions to the development of the island’s track and field sports industry, imposing 8-foot sculptures of Usain Bolt and Shelly-Ann Fraser-Pryce will be unveiled to represent the glory of the two athletes who triumphed during the same Olympic contests to emerge “the fastest man” and “fastest woman on earth.”

The world will not soon forget Jamaica’s Jubilee year celebration of independence from British rule. It was 2012, an Olympic year that athletes competed in London, England. The milestone accomplishment also coincided with optimism and anticipation of track and field triumphs by two sprinters dubbed “Pocket Rocket” and “Lightning Bolt.”

The female “Rocket” shot from her starter’s block four years earlier to become the first Caribbean woman to claim the Olympic 100meters title.

Undoubtedly the fastest woman on earth mined gold in Beijing, China in 2008 and reclaimed the title four years later in London, England to deliver a cache when her island marked 50 years of independence.

She exacted her male counterpart’s feats carting three gold treasures back to the Caribbean island. [. . .]