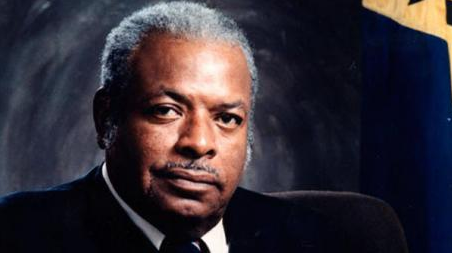 A report by Rodney Hinds for The Voice Online.

BARBADOS CELEBRATES its 50th year of independence on November 30. The occasion and revelry will in no small part be due to the courage of one man who relentlessly fought for the freedom of his country.

The late Errol Barrow is the man in question and Barbados’ first prime minister is now the subject of a new film Barrow: Freedom Fighter which will hit the big screen at the end of the month.

As the first Bajan premier Barrow led his nation to independence and his life has now been captured my the makers of the film, Step By Step Productions.

The film had a recent pressing screening at London’s Soho Hotel and executive producer Marcia Weekes revealed why her and husband, Dave, decided to chronicle the life of Barrow.

Weekes told Life & Style: “We were so inspired by the work of this man that we had to put it on film so we could help to pass on his legacy. “We wanted to put it in a format that young people would want to watch too.”

With the future in mind, all young people who watch the film in Barbados will be introduced to the Leaders In Training (LIT) initiative which will see them receive a booklet explaining the principles of leadership that Barrow displayed via his visionary tenure.

It is was fitting that the screening was staged in the capital as Barrow developed strong ties in the United Kingdom when he joined the RAF and served in World War Two, where he was the personal navigation officer to the Commander-in-Chief.

After leaving he studied at the Inns of Court and the London School of Economics. After returning to Barbados in 1950, he entered Parliament in 1951, where he carved his career into becoming one of the Caribbean’s greatest leaders.

The film stars Adrian Holmes (who plays Barrow), Lisa Arrindell Anderson, Robert Christopher Riley. All the film’s lead- ing actors have Bajan descent which was the wish of the acclaimed film-makers. The film is narrated by former US Attorney General Eric Holder who also has Barbados heritage.

One of the many interviewees that gave personal testimonies of Barrow was another Bajan icon Sir Garfield Sobers, con- sidered by many as the greatest all-round cricketer of them all.

Sir Gary said: “He was just not a politician but a great person. The film portrays what he was about and how people thought about him because he was highly respected throughout the world

“The film is tremendous and I am delighted to be part of it. Thanks to the Weekes’ for including me and giving me the
opportunity.”

Throughout the film, Barrow is shown as a man that cared for his people and his nation. He was at the centre of so many positives for the island until ill-health got the better of him at the age of 67.

Born into a family of political and civic activists in the parish of Saint Lucy, he was educated at Harrison College. During his tenure the DLP government accelerated industrial development, expanded the tourist industry to reduce the island’s economic dependence on sugar, introduced National Health Insurance and Social Security, and expanded free education to all levels.

By an act of Parliament in 1998, Barrow was named as one of the ten National Heroes of Barbados. The key now for all those involved with the film is worldwide distribution.

“The plan now is to get the film right across the UK and worldwide because of Mr Barrow’s international standing,” said co-executive director Dave Weekes. The film-makers are actively attemtping to acquire a distributor in the UK.

“The Caribbean knows Mr Barrow very well. With the right thrust and backing it can be shown across the world.”

Barrow: Freedom Fighter has raised the bar for films coming out of Barbados. With the financial assistance of strong Bajan brands such as Goddards and Court’s and government, the film-makers have produced a great 80 minutes of entertainment that should appeal to movie-goers around the world.

One thought on “Errol Barrow: Freedom Fighter And Icon”