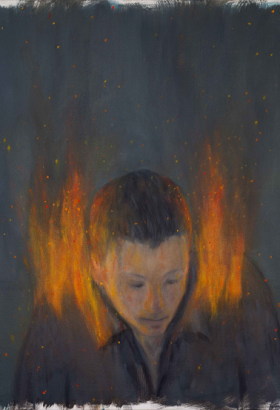 Enrique Martínez Celaya: Small Paintings 1974-2015 will debut Friday, Jan. 22 at the Abroms-Engel Institute for the Visual Arts in Birmingham, Alabama, with an opening reception and gallery talk beginning at 5 p.m., Rebecca Sheehan reports for Birmingham’s Weld.

The Cuban artist will be sharing rarely seen works and small paintings created over 40 years of a life in art. The exhibit contains 45 smaller works in two galleries and a gallery of five large-scale paintings. All are rich in color, dynamics and depth of thought and use a variety of media from fabric, mirrors and feathers to tar and wax.

“Through the intimacy of the small painting format, the exhibition reveals many of the artist’s major poetic and painterly concerns, including his engagement with topics such as memory, loss, exile, coming-of-age, birth, love, longing, the temporal, the horizon, nature and ambiguity, alchemical transformations, and the discovery of guides amidst an often-paradoxical and uncertain reality,” according to the press release.

Celaya began painting as a youth in Cuba in the ‘70s. The exhibit also includes work produced in the 1980s, while Celaya was studying laser physics and quantum mechanics, prior to his enrollment in the Masters of Fine Arts program at the University of California, Santa Barbara.

“Martínez Celaya’s work is also concerned with questions of ethics, authenticity and reflections on human failure as well as human accomplishment, with his work seeking to function as a method and means of identifying and breaking through illusory realities amidst the enigmatic circumstances he, and by extension, his audience, might be facing,” according to the release.

Prior to the opening reception, patrons may listen to a gallery talk and discussion between Celaya and AEIVA director and curator of the exhibit Lisa Tamiris Becker.

AEIVA is located at 1221 10th Avenue S. The gallery talk begins and 5 p.m. and the reception will last from 6–8 p.m. The exhibition will be available for viewing until March 19. AEIVA’s hours are Monday through Friday 10 a.m. to 6 p.m. and Saturdays 12 to 6 p.m. For more information, visit uab.edu.