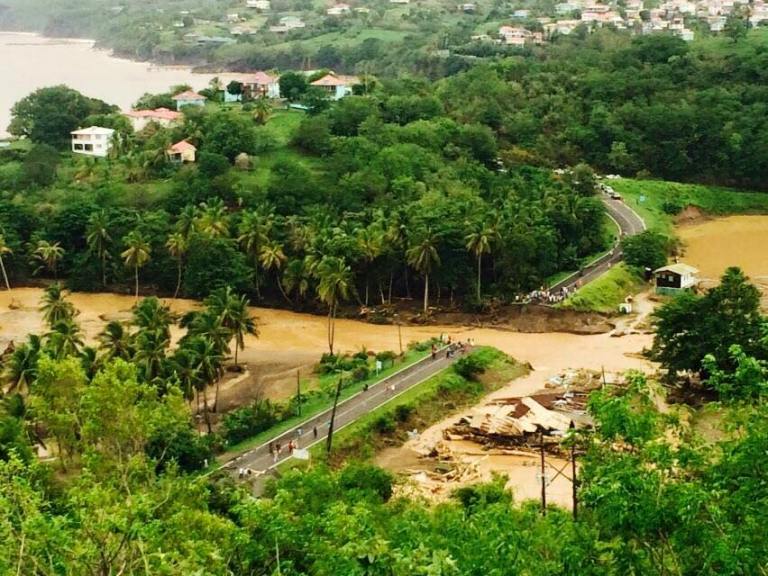 This report by Patrick Knight was published by UNICEF.

The night of 26 August began as any other night for Mary Fontaine, her husband and their two children. The family live in the south-eastern community of Petite Savanne, in Dominica, a 290 sq. mile island country in the eastern Caribbean.

The Fontaines were aware of the weather forecast – which had warned of showers associated with Tropical Storm Erika, and Mary secured the family home. Such weather systems are common during Atlantic hurricane season – Erika would be the fifth tropical storm of the 2015 season. The island was at the height of a drought, and Mary was prepared for these much-needed showers.

But the more than 71,000 residents of this small, mountainous island were not prepared for the rain that pounded Dominica for 12 hours on Thursday 27 August, as Erika made its slow exit. All told, 12.64 inches of rain fell in that short period.

As morning broke across Dominica, the full scale of the devastation became apparent. Landslides and rock falls had covered villages and blocked major roads. More than 12 major rivers had broken their banks, causing severe flooding and taking out vital bridges, disrupting water, electricity and telecommunication services.

Links with the outside world were cut, as flood waters and debris covered the tarmac at the main commercial airport in the east of the country, as well as the smaller landing strip in the capital, Roseau.

“I was roused from my sleep, and, when I got outside, it was just water, water, water everywhere,” recalls Mary. “I’ve been here all my life but never saw anything like this. It was disaster all around.” She frantically tried to account for family members who live in neighbouring houses.

Devastation
Petite Savanne was hit hard. The community is home to 753 people. Eleven of the 20 confirmed dead and 21 of the 35 residents reported missing call that ravaged district home. Among the missing are Mary’s brother and his two sons. Her niece was located, safe.

Long-time resident of Petite Savanne Urban Baron described the scene as “worse than a war zone”.

“More than 50 houses were on the verge of collapse, and there were landslides everywhere,” said Urban. He described people digging through mud to free those who had been trapped under fallen houses. In many cases, the only tools were their bare hands.

The road to recovery for Mary and the other residents of Petite Savanne – and the nearly 17,000 other residents of the island who have been affected severely by the storm – will be long and uncertain. Roads and bridges will be repaired, but emotional scars may run deep, in the island dubbed the ‘nature isle’ of the Caribbean.

The government has appealed for international assistance, and pledges are coming in.

UNICEF has so far dispatched 4,000 water purification tablets, more than 500 boxes of adult hygiene kits and 100 infant hygiene kits to the most affected areas. The organization is currently working with the Ministry of Education to ascertain the extent of damage to the education sector, ahead of the scheduled 7 September start of the school year.

For the original report go to https://blogs.unicef.org/blog/dominica-struggles-to-recover-from-devastating-storm-erika/

Those wishing to help the people of Petite Savanne can contribute here: