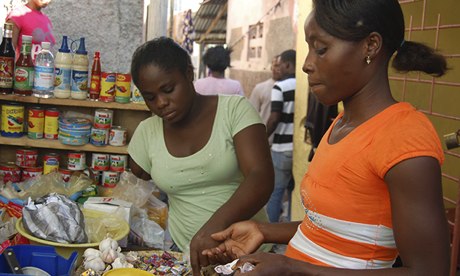 Accessible education, awareness campaigns and economic inclusion will become all the more important as natural disasters result in more disability, Elisabeth Braw reports in this article for London’s Guardian.

Aurelius Marc, a 28-year-old father of one, became disabled in the 2010 earthquake in Haiti, when a wall fell on him. Like 80% of the world’s 785 million disabled people (PDF), this Port-au-Prince resident lives in a developing country. That might mean that Marc is in the worst of all worlds: exclusion from an economy that’s in poor shape to begin with and perhaps reduced to begging to survive.

But Marc can use his legs again with the help of orthothesis, flexible external rods. A former part-time construction worker, he has started his own motorbike taxi service. “It’s different walking now, and it’s harder to keep my balance, but without the orthothesis I wouldn’t be able to walk [at all],” he said at his tent home in the Haitian capital. “Drivers call me a lot when they’re stuck in traffic. And girls call me late at night when they want to go and see their boyfriends.” Marc proudly shows off his second-hand motorbike, then speeds off to demonstrate its power.

The fact that Marc is able to walk and earn a living is, of course, a miracle for him. At the same time, every disabled person who is able to support themselves is good news for an overstretched government.

Globally, the economic potential of disabled people is gaining attention. “Inclusion of people with disabilities in the labour market will bring significant benefits to both the economy and to the individual,” said Arup Banerji, director of social protection and labour at the World Bank Group.

Many developing countries are starting to see their disabled citizens as an asset. “We’re developing partnerships with microfinance institutions and employment agencies in the 28 countries where we have projects,” said Anne Leymat, an expert on the economic inclusion of people with disabilities at Handicap International.

“Often, the microfinance institution rejects disabled people because they see the disability, not the person’s potential,” she said. “They don’t understand what a disability is and have stereotypes about it. But we train them to help them change their attitude, and we’re seeing results. Things are moving slowly, but much faster than five years ago.”

In desperately poor countries, the formal sector is very small, which means even fewer employment opportunities for disabled people. In other words, they have no choice but to become entrepreneurs. The upside, Leymat says, is that “disabled loan-takers are actually better at paying back loans. They’re also more conscientious in their work. They’re so used to having to fight adversity that they try harder than others.”

Such resilience will be crucial in a world affected by climate change. The International Disability and Development Consortium reports that at least 200 million people – including 18 million people with disabilities – will be displaced by climatic events by 2050. And the natural disasters will result in more disability. According to the World Disasters Report, for every child killed by a natural disaster, three become impaired.

“And people are living longer, too,” said Sophie Mitra, an associate professor of economics at Fordham University, New York. “As a result, it will become even more important to include disabled people in the labour market.” Governments in developing countries, according to Mitra, should make education accessible to disabled children, run awareness campaigns to challenge stereotypes, and “when they’re building up the infrastructure, including after a natural disaster, they should make it accessible. That’s much easier and cheaper than retrofitting it.” NGOs like Handicap International now run climate change-related projects for disabled entrepreneurs in heavily affected countries such as Mali and Sri Lanka.

In another slum neighbourhood of Port-au-Prince, Zephyr Manise Poste-Marchand runs a market stall selling groceries. She lost an arm when her home collapsed during the earthquake and Handicap International has provided her with the training and equipment.

“I’ve been doing this for 10 months now” said Poste-Marchand, whose stall in the narrow alley outside her home allows her to support herself and her daughter. “People need groceries every day,” she said. “It’s thanks to the shop that I can rent my home. I’ve even been able to buy a TV.”

For the original report go to http://www.theguardian.com/sustainable-business/economic-inclusion-disabled-climate-change