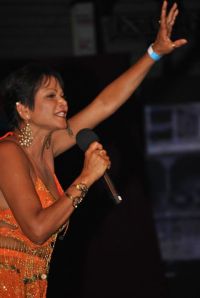 Essiba Small of Caribbean Beat describes the development of chutney soca, the fusion between soca music and chutney or chatnee music that is popular in Trinidad and Tobago, Guyana and Suriname.

It’s fitting that the man who created soca music, by combining soul with calypso, was the one who also birthed chutney soca. Back in 1974, when Trinidadian Ras Shorty I released ‘Om Shanti Om’, there was not yet a name for this musically intoxicating marriage. Shorty infused soca with traditional classical Indian percussive instruments like the dholak (a two-headed hand-drum), the tabla (similar to bongo drums), and the dhantal (a long steel rod played by striking it with a horseshoe). [See our previous post Lord Shorty invents the chutney style] 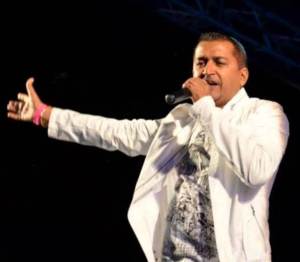 “Om Shanti Om” was arguably the first chutney soca song on record, but the genre drew on the older chutney style, which can be traced to Caribbean Hindu weddings. Traditionally it meant a kind of traditional tune sung by women, later lent a dance tempo by musicians like Ramdew Chaitoe in Suriname. Trinidadian Sunilal Popo Bahora, a.k.a. Sundar Popo, took it mainstream with the release of his 1970s hit ‘Nana and Nani’.

And though Shorty experimented with a soca-and-chutney cross in that same decade, chutney soca as we know it today was only officially defined in 1987, with the debut of Drupatee Ramgoonai’s first album Chatnee Soca. The following year, another exponent emerged, in the person of Samraj Jaimungal, or Rikki Jai, as he’s much better known. Rikki Jai was a member of the Indian music orchestra JMC Triveni before releasing “Sumintra” — a runaway hit that told the story of an Indo-Trinidadian woman’s love for soca over the music of Indian playback singer Lata Mangeshkar.

Today’s widespread popularity of chutney soca among Trinidadians of all backgrounds can be credited in part to the introduction of the Chutney Soca Monarch competition in 1995, open to all performers of the genre. Rikki Jai and Drupatee became household names, alongside Ramrajie Prabhoo (the first woman to win the coveted Chutney Soca Monarch prize), Heeralal Rampartap, Sonny Mann, and Rooplal Girdharie — who also increasingly found a place in Carnival fetes and soca concerts.

Today’s chutney soca has changed since the days when Drupatee and Rikki Jai ruled supreme. The use of filmi melodies from popular Bollywood movies, with lyrics rewritten to give the songs local relevance, has increased the genre’s popularity. Meanwhile, the lyrics’ prevailing themes have also evolved, in directions that often flirt with stereotype, with numerous pro-alcohol songs (Adesh Samaroo’s ‘Rum Till I Die’, Ravi B’s ‘Rum Is Meh Lover’), and others slyly tackling marital infidelity.

The genre has also spawned young and feisty superstars — among them, KI, Sally Sagram, and Nisha and Ravi B — who are just as popular during Carnival season as soca artistes. Unafraid of trying new things, including musical collaborations, these artistes are also trendsetters, with endorsement deals for telecom companies and websites that keep their fans in touch with gig dates and new releases.

Meanwhile, pioneers Drupatee and Rikki Jai have also successfully kept up with the music, and serve as inspiration and motivation to the growing bunch of younger chutney soca performers. Earlier this year, Drupatee’s career was given a second breath of life, when she teamed up with soca’s hottest export, Machel Montano, for the song ‘Indian Gyal’. The two first collaborated on the chutney soca ‘Real Unity’ thirteen years ago — the song symbolic not only of the ethnic backgrounds of the two singers, but as a genre all Trinidadians can lay claim to.

For the full article, including short profiles of six chutney soca artistes, go to http://caribbean-beat.com/issue-123/chutney-soca-succession.

4 thoughts on “The development of chutney soca music”