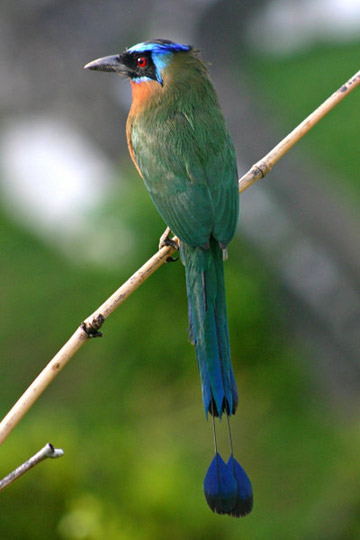 Jeremy Hance (Mongabay) interviews Nigel Noriega, director of Sustainable Innovation Initiatives, who discusses how this NGO is working to raise consciousness about the islands’ impressive biodiversity through initiatives including film production, field sites for researchers, and getting science from researchers to the public. [See introduction by Jeremy Hance in previous post Trinidad and Tobago: A Biodiversity Hotspot Overlooked.]

Will you tell us about Trinidad and Tobago’s forests? There is quite a bit of history here. In the last 100 years, work in these forests was instrumental in deciphering principles we now take for granted. For example: echolocation in bats, animal chemical defenses and mimicry. William Beebe, America’s most famous naturalist before the age of television, invested a lot of effort in these forests and spent his final years here. Even before the age of ecotourism, forests here have been world famous for the large number of bird species that are accessible in a short time. The Tobago Main Ridge Forest Reserve is under consideration as a UNESCO World Heritage Site because it is on record as the world’s oldest legally protected forest reserve geared specifically towards a conservation purpose. [. . .]

These small islands have over 3,000 known species. [. . .] Some of T&T biodiversity is explained by geological history. Trinidad and Tobago were formerly connected to mainland South America. Trinidad’s Northern Range is an extension of the Coastal Cordillera range in Venezuela. Offshore in the continental shelf, there is geological evidence of rivers that formerly connected what is now Trinidad with other parts of South America when sea levels were lower. This physical evidence combined with genetic data from Trinidad’s guppies suggests Trinidad’s freshwater river systems could have extended into Venezuela and Guyana during the last ice age. So, pending investigation, part of your explanation may be found in ancient waterways that were biological corridors. In addition, the outflow from of the Orinoco delta sends South American vegetation, seeds, microbes and stowaway animals that have been settling in Trinidad with a certain periodicity over the centuries.

Habitat diversity may be another answer to your question. Hillside and lowland forest, full-fledged natural savannah, swamp, mangrove, coupled with sedimentary, metamorphic, volcanic and limestone substrate are all packed into less than 2000 square miles on two islands only 11 degrees from the equator… It’s a pretty good formula for biodiversity, and I’m not even getting into the marine ecosystems. [. . .]

Will you tell us about some standout endemic species on the islands? Of the 3,000 or so species here, about 85 are endemic (i.e. found nowhere-else in the world). The list of T&T endemics is growing as people begin to look more closely. About 30 of these are vertebrates, insects, crustaceans and arachnids. The rest of list I’m referring to includes vascular plants. There are others who can tell you more about microbes, algae, fungi, lichens etc. that are not normally included in the counts.

Standout examples include the striking Trinidad motmot (Momotus bahamensis) [. . .] and the Pawi or Trinidad piping guan (Pipile pipile), listed as Critically Endangered. Pawis belongs to an evolutionarily old group (Cracidae) that you might think of as precursors to the galliformes (i.e. the group that contains turkeys, chickens, quail etc.). Almost in the realm of folklore, is the cave-dwelling luminous lizard (Riama shrevei), a member of the genus Proctoporus that reflects light along each side of its back, and lives in caves to seek cooler temperatures than you normally find in the tropics. The El Tucuche golden tree frog (Phyllodytes auratus), considered Critically Endangered, has been a symbol of conservation efforts, and is found in cloud forests on two peaks at elevations above 800 meters. But there are other endemic frogs such as the colorful Bloody Bay fragrant frog (Mannophryne olmonae), listed as Vulnerable. The guppy has two close relatives that are endemic. There are also endemic armored catfishes, some of which have been marketed as “suckerfish” for aquariums. Among endemic snakes, the Trinidad worm snake (Typhlops trinitatus), is blind and burrows. Many of the invertebrates do not yet have common names. T&T’s longhorned beetle is the world’s only member of its genus. The endemic velvet worm catches insects like crickets and cockroaches, and is absolutely stunning to look at. The group of endemic spiders include two types of tarantulas. The list also includes high-elevation ants, a freshwater crab, a freshwater shrimp and scorpions. Endemic vascular plants include orchids, gymnosperms (non-flowering plants) and bromeliads.

If you consider possible human manipulation in the creation of endemics, the variety of cacao (cocoa) called Trinitario originated in Trinidad and appears to have been endemic for a small period before it was distributed throughout the global tropics to become the major source of high-grade chocolate. [. . .]

For full interview (with introductory article and video), see http://news.mongabay.com/2013/0826-hance-trinidad-tobago-interview.html