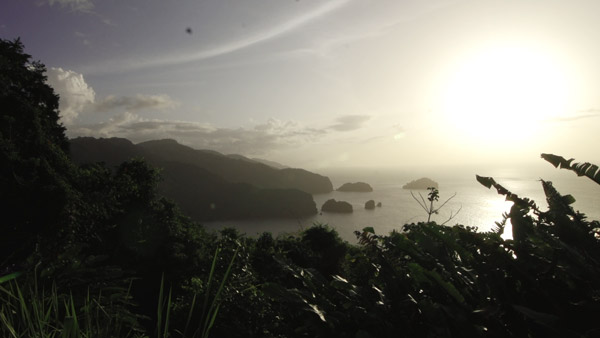 Jeremy Hance writes about how the biodiversity of Trinidad and Tobago has influenced everything from evolutionary science to tropical conservation. He speaks to Nigel Noriega, director of Sustainable Innovation Initiatives, about the islands’ wealth of tropical ecosystems and amazing number of animal and plant species.

The two-island nation of Trinidad and Tobago in the Caribbean (just off the coast of Venezuela) may be smaller than Delaware, but it has had an outsized role in the history of rainforest conservation as well as our understanding of tropical ecology. Home to an astounding number of tropical ecosystems and over 3,000 species and counting (including 470 bird species in just 2,000 square miles), Trinidad and Tobago is an often overlooked gem in the world’s biodiversity.

“In the last 100 years, work in these forests was instrumental in deciphering principles we now take for granted. For example: echolocation in bats, animal chemical defenses and mimicry,” Nigel Noriega, the director of Sustainable Innovation Initiatives (SII) told mongabay.com adding that the “Tobago Main Ridge Forest Reserve is under consideration as a UNESCO World Heritage Site because it is on record as the world’s oldest legally protected forest reserve geared specifically towards a conservation purpose. It was recognized as early as 1776 that the forests were crucial to maintaining the rainfall on these islands.”

A part of the reason for the island’s impressive biodiversity (including 85 endemic species so far) is that Trinidad and Tobago are islands that act as evolutionary laboratories, but still containing heavy influences from the South American mainland to which the islands were likely connected in the recent past. “[Trinidad and Tobago]’s swirling stew of biogeography takes on characteristics of a giant ecotone (ecotones are transition zones between ecosystems). Each of its habitat is large enough to be legitimate, but small enough to be a buffer zone in the more massive mainland systems. Blending and adaptation are being observed at closer ranges and higher speeds than we might be accustomed to thinking about,” Noriega says.

This is no-where better observed than in the guppies of Trinidad, which have become the focal point of numerous studies across multiple disciplines. The guppy populations on this small island are unlocked new visions of how species evolve, according to Noriega. “It is the first time we have had such a detailed look at evolution in the very first stages of population adaptation. Such a new perspective is exposing a lot of details we previously did not know we needed to examine, or were simply unable to measure. Guppy studies in Trinidad have created a conceptual toolbox that is compelling us to explore hypotheses that were not previously imagined. The impact on science is tremendous!”

However like most of the world’s tropical forests, those of Trinidad and Tobago are imperiled by human actions. “I think the overarching threat is value-assignment. There is a culture of devaluing the biodiversity of the tropics even while it is used to fuel the commerce of the rest of the world,” Noriega says, adding that “the history of the Caribbean has been based on trading our valuables for global commerce and people here are still trained on the most basic levels to think of this pattern as beneficial. I think this type of culture is the root of many major threats.”

2 thoughts on “Trinidad and Tobago: A Biodiversity Hotspot Overlooked”