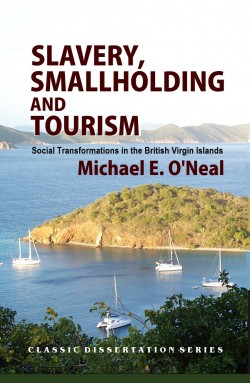 Michael O’Neal’s book on British Virgin Islands social history—Slavery, Smallholding and Tourism: Social Transformations in the British Virgin Islands (Quid Pro)—is now available in hardcover, paperback and eBook formats. The book explores the political economy of development in the British Virgin Islands—from plantations, through the evolution of a smallholding economy, to the rise of tourism. The study argues that the demise of plantation economy in the BVI ushered in a century of imperial disinterest persisting until recently, when a new “monocrop”—tourism—became ascendant. Using an historical and anthropological approach, O’Neal shows how the trend toward reliance on tourism and other dependent industries affects many BVIslanders—called the “Belongers”—in ways that echo their historical and economic heritage.

Part of the Classic Dissertation Series from Quid Pro, the book adds a new foreword by Vassar College’s Colleen Ballerino Cohen and additional commentary by UC-Irvine’s Bill Maurer, who shows how even the emergence of a financial services industry may be understood through the insights that O’Neal presents in his study.

Michael E. O’Neal is an anthropologist and a former college president, currently serves as Senior Research Fellow at the Washington, D.C.-based Island Resources Foundation and as a director of a family business in the British Virgin Islands.