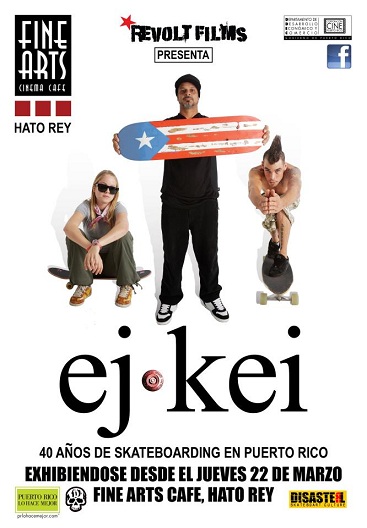 Ejkei: 40 Años de Skateboarding de Puerto Rico, a film about the trajectory of skateboarding on the island, will premiere on Thursday, March 22, 2012 at the Fine Arts Cinema Café in Hato Rey, Puerto Rico.

Ejkei, directed and produced by Héctor Hugo Hernández and Javier Viqueira Keller, is the first feature-length documentary made about the history of skateboarding in Puerto Rico. The documentary shows the trajectory of this activity from 1970 through 2010 through the words of leading figures in the field.

It is the first time that skateboarding in Puerto Rico is researched, bringing together not only a wealth of visual and audio material, but also an oral history of this practice on the island. EJKEI traces the past, present and future of this activity and profiles of those who practice it.

The title of the documentary, Ejkei, plays with language and phonics, capturing in a humorous and subtle way the appropriation of the English word “skate” [pronounced EH-KAY]. In other words, it is a commentary on the “creolization” of this activity at the hands (and feet) of the local skateboarders.