“Everyone who knows Rose Mary Allen knows that she practices science with her heart and soul. She is inspired by real issues of real people in Curaçao and the other countries in the Caribbean,” explains Kas di Kultura, the government institution for culture.

After completing her secondary education at the Maria Immaculata Lyceum in Curaçao, Allen studied at the Catholic University of Nijmegen, the Netherlands, where she got her Master’s degree in Cultural and Social Anthropology in 1977. In 2007 she received her Ph.D. degree from the State University of Utrecht, the Netherlands; her dissertation was called ‘Di Ki Manera? The Social History of Afro-Curaçaoans, 1863-1917.’ The principal themes in Allen’s publications are emancipation, migration and identity.

To be considered for the biannual Boeli van Leeuwen Prize, the candidate must comply with several criteria that reflect the interests of Boeli van Leeuwen (1922-2007), who was an esteemed Curaçaoan novelist, poet, lawyer, and intellectual. “The Prize is awarded to a person or organization that has delivered, in the cultural, legal, governmental, social or journalistic field, an intellectual performance that has scientific depth and that moreover originates from a true concern with society. The performance must exhibit originality and creativity, must be exemplary and inspirational for the society, and must broaden horizons and transcend borders.”

In her speech during the award ceremony, Allen explained that through her work she has always tried to give a voice to the voiceless – groups in society that have been neglected in the past and/or present – and that she wished to see the Boeli van Leeuwen Prize 2011 as one form of recognition for those groups. She said that she accepted the Prize “with gratitude and respect for the elderly and ancestors who have gone before us and with great hope in the youth and other descendants who will come after us.” 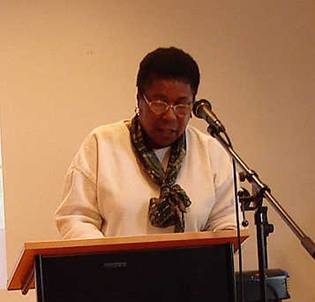 Rose Mary Allen was a researcher with the government Institute of Archaeology and Anthropology (AAINA) from 1977 to 1999. Since 1999 she works as a researcher, consultant, writer, and lecturer, including at the Faculty of Law of the University of Curaçao (formerly University of the Netherlands Antilles). She has authored or co-authored numerous scholarly articles and books, including ‘Cuba mi ke bai Testimonies of Workers Who Emigrated from Curaçao to Cuba at the Beginning of Twentieth Century’ (2001; in Papiamentu). She is presently a research fellow on the project ‘Citizenship, National Canons and the Issue of Cultural Diversity’ of the Amsterdam Institute for Social Science Research (AISSR), University of Amsterdam, the Netherlands.

[Many thanks to Peter Jordens for this post and for his translation from the original Dutch article.]

For the original article, go to http://www.antilliaansdagblad.com/nl/lokaal/3944-rose-mary-allen-krijgt-prijs.html