One of the highlights of Saturday’s Caribbean Tales Film Showcase in New York City was a conversation between calypso legend the Mighty Sparrow and Trinidad-born novelist Elizabeth Nunez. The conversation—during which the Sparrow frequently broke joyfully into song—ranged from the early days of Slinger Francisco’s career to his daughter Karen’s reminiscences of growing up with her famously talented dad. Here are some highlights:

How did you become the Mighty Sparrow?

When calypso singers chose a sobriquet they wanted something fierce, something powerful to bring to the stage, but people didn’t understand why I didn’t sing like everybody, why I was dancing on the stage from side to side, so they called me the Sparrow. But when they call you a sparrow there’s not much respect, so I wanted a name that would bring more respect. So when I realized the name of Sparrow had stuck, then I decided that the Sparrow could be Mighty too, and I became the Mighty Sparrow.

On the number of awards he has received throughout his career:

He is both a Nigerian chief and a “Rey del Calypso,” as stated in a Venezuelan honor he received from the Chávez government.

About his political songs:

From the days of the Federation and the leasing of Trinidadian land to the Americans, we can follow the history and politics of Trinidad through his songs. 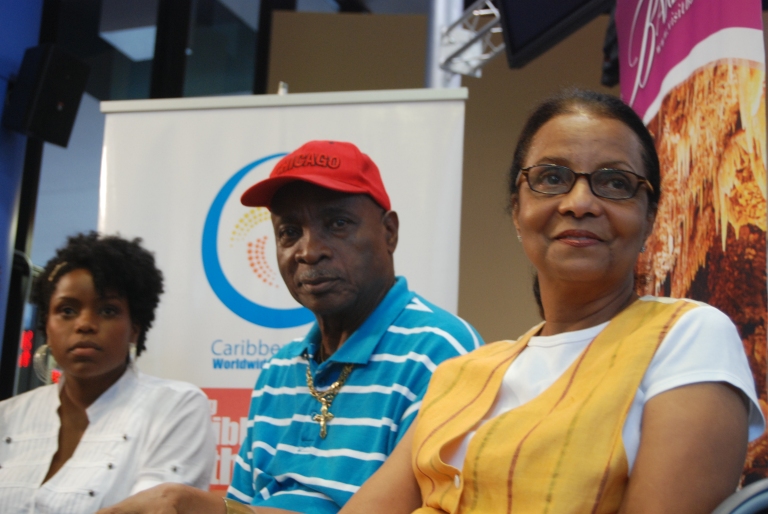 “Inspiration comes from all sorts of different styles and voices that I’ve loved over the years . . . it could be people who have been there for you. In trying to imitate them you sometimes come up with something new. From people who have touched his life: Ella Fitzgerald, Paul Robson—when you heard him you heard something else—people like Satchmo, Nat King Cole.”

From his daughter Karen—herself a budding singer—when asked what it was like to grow up with her dad:

“I would say that it was just magical being around him. I saw him as my superhero. I once was doing a project for school and asked him how he came up with his songs and he just broke into a new song on the spot. How did you create that just like that? It was then I understood he was not an ordinary man, but an extraordinary man of great talent. It was like magic every day.”

When did he know he had this extraordinary voice, this talent to compose, to take what is going on in the world, in every aspect of society, and turn it into these great lyrics?:

“I won’t say I always knew. But you know what it is that you love to do. . . I always thought that my voice was good, but you don’t really know how good. I still don’t know if my voice is good, but God gives you what you need to do what you love. I just knew that this is what I wanted to do.”

Is there any calypsonian today that makes you feel that calypso is in good hands:

Calypso is changed. And the young ones who are supposed to carry the torch have decided they want to go in another direction and do soca. Soca is more energetic. There were some good calypsos some years ago, but you cannnot make soca do what calypso did. Soca’s beat is different. This is what is happening now, so if you want to convey a message, if you want to talk about the things that are happening right now and correct some of the things that are happening in your life, you have to learn to do it with this new beat. Calypsonians used to be able to stay with the old beat and bring it out, but today, what can I tell you?, they’re more interested in the money. Some singers won’t even show up without being promised one million, or two million, for each stage of the calypso competition.

Elizabeth did a wonderful job guiding the discussion and we just want to point out that her new novel, Boundaries, will be out this summer. You can preorder through Amazon at http://www.amazon.com/Boundaries-Elizabeth-Nunez/dp/1617750336

My thanks to my husband Gordon for taking the photos at the event.

4 thoughts on “How the Sparrow became Mighty”