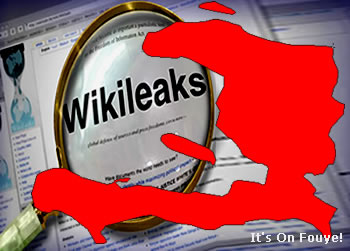 Drawing from a trove of 1,918 Haiti-related diplomatic cables obtained by the transparency-advocacy group WikiLeaks, The Nation is collaborating with the Haitian weekly newspaper Haïti Liberté on a series of groundbreaking articles about US and UN policy toward the Caribbean nation.

Haïti Liberté, published largely in French and Creole, is working with WikiLeaks to release and analyze the Haiti-related cables, which will be featured in a series of English-language Nation pieces, written by a variety of freelance journalists with extensive experience in Haiti and posted each Wednesday for several weeks.

The cables from US Embassies around the world cover an almost seven-year period, from April 17, 2003—ten months before the February 29, 2004, coup d’état that ousted President Jean-Bertrand Aristide—to February 28, 2010, just after the January 12 earthquake that devastated the capital, Port-au-Prince, and surrounding cities. They range from “Secret” and “Confidential” classifications to “Unclassified.” Cables of the latter classification are not public, and many are marked “For Official Use Only” or “Sensitive.”

The cables that form the basis of the articles in this series are being published in their entirety on the WikiLeaks site. However, in some cases, names will be redacted for safety reasons.

While not revealing any intelligence or military operations, and not comprising a complete set of all Port-au-Prince Embassy communiqués, the cables offer a penetrating look into US strategies and maneuvering in Haiti during the brutal coup years (2004–2006) and the period after President René Préval’s election (2006–2010). We see Washington’s obsession with keeping Aristide out of Haiti and the hemisphere; the microscope it trained on rebellious neighborhoods like Bel Air and Cité Soleil; and its tight supervision of Haiti’s police and of the United Nations’ 9,000-man military occupation known as the UN Stabilization Mission in Haiti (MINUSTAH).

Embassy officials offer candid assessments of other ambassadors and of Haitian politicians, UN officials, and other public figures. Sometimes their analysis is illuminating; more often, their assessments range from arrogant, pedantic or self-serving to false, tendentious or just plain ridiculous.

What emerges is an extraordinary portrait of Washington’s aggressive management of Latin America’s first sovereign nation—and its bare-knuckled tactics on behalf of US corporate interests there. But the cables also show how Washington’s designs are met with fierce resistance from the Haitian people. And they reveal how Haiti is a key arena for North-South struggle and East-West intrigue. Washington squares off against Caracas and Havana, particularly over oil, while Beijing and Taipei engage in fierce diplomatic arm-wrestling that threatens to derail the UN military mission in Haiti.

This release is part of the latest phase of WikiLeaks activity. Originally, WikiLeaks distributed the 251,287 leaked US Embassy cables and the Afghan war logs it obtained last year by providing them to large Western newspapers like the New York Times and the Guardian and the German magazine Der Spiegel. Since late December, WikiLeaks has selected media outlets in other countries—well over fifty now—and provided them with the US Embassy cables relevant to their country or region. Where they have been published, these disclosures have almost invariably generated major headlines, but typically they have received scant attention in the United States.

By partnering with Haïti Liberté, and placing the cables in context for a US audience, The Nation hopes to heighten the impact of the Haiti releases in the United States and internationally—and to advance the WikiLeaks mission of transparency in government that we regard as critical to democracy.

The PetroCaribe Files: The fight Big Oil lost in Haiti (for now).
On Background: From WikiLeaks to WikiHaiti: Now that WikiLeaks is collaborating with media organizations across the globe, a huge trove of previously-unpublished State Department cables are coming to light.

For the original report go to http://www.thenation.com/article/161009/wikihaiti-nation-partners-haiti-liberte-release-secret-haiti-cables