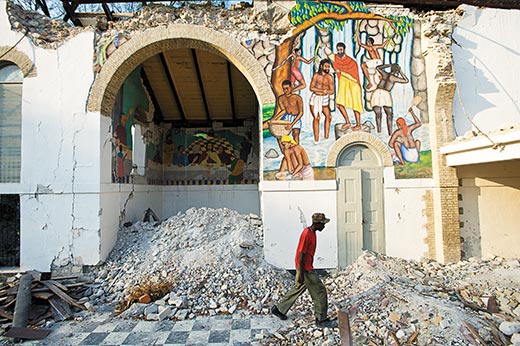 Sean Piccoli reports for the South Florida Classical Review site on the efforts to raise funds to rebuild the music school and orchestras of the Holy Trinity Cathedral in Haiti.

The earthquake that shook Haiti to its foundations in 2010 also demolished one of its cultural treasures: Holy Trinity Cathedral, an Episcopal church and campus in Port-au-Prince that had housed Haiti’s only music school and orchestra.

The loss has forced the 55-year-old music program to improvise under harsher-than-usual conditions.

“We don’t have a space to rehearse and teach music, so we use open air,” says the Rev. David Cesar, the priest who runs the cathedral’s music school, conducts the Haiti Philharmonic Orchestra and plays strings in its offshoot, the Holy Trinity Chamber Ensemble.

The 10-piece chamber ensemble will play fundraising concerts at Trinity Cathedral in Miami on Friday and St. Gregory’s in Boca Raton on Saturday, a step in a rebuilding project that Cesar, speaking from Port-au-Prince, says will take years. But he sees the musicians’ South Florida visit as more than just an appeal for basic needs. The concerts will consists of works by Haitian composers and arrangers, including three by Werner Jaegerhuber, who based his classical compositions on folkloric and vodou music. They are intended, Cesar says, “to show a positive image of Haiti and also to share the hope.”

Cesar’s allies among South Florida’s religious and arts communities are mobilizing to raise money for instruments, supplies and construction of a temporary shelter for the program.

“The soul of these people has been destroyed if there’s no music,” says the Very Rev. Douglas McCaleb, dean of Trinity Cathedral and the organizer of Friday’s event, which begins with an art fair and silent auction of works by Haitian artists.

McCaleb says he decided that his church could do the most good by working closely with its wounded sister parish on the restoration of “the center of classical music in Haiti.”

He enlisted donors and volunteers from such organizations as the choral group Seraphic Fire, the Miami Bach Society, the New World Symphony and the Arsht Center.

The musicians’ weekend stay and mini-tour has several aims, including raising awareness of the music program’s plight outside of Haiti and energizing the visitors for the work that lies ahead.

“The idea is to give them three days in South Beach and hopefully expose them to a great deal of support from the music community here,” McCaleb says, “so they can go back with some sort of renewed spirit.”

On Jan. 12, 2010, Cesar was in his fourth-floor office planning a concert for the 50th anniversary of the Holy Trinity boys choir. .

Staff, teachers and students of the music program — about 60 people who had been upstairs — survived the collapse of the church’s office annex. Those below, inside a trade school operated by the church, died in massive numbers.

The cathedral, prized for its religious murals, collapsed. The architectural and spiritual anchor of Port-au-Prince’s Episcopal community was gone, along with the music program’s 700-seat concert hall, a complex of 27 rehearsal rooms and all the equipment inside.

“We lost everything,” Cesar says.

Before the earthquake, the priest’s long-term goal was to transform the music school into a world-class conservatory. That’s still the plan. For now, however, Cesar is talking to a building engineer about the $30,000 he says it will cost to erect a temporary shelter.

He thanks God that he lived through the catastrophe, “because we have to continue this program and move it to this conservatory.”

For the original report go to http://southfloridaclassicalreview.com/2011/04/haiti-philharmonic-musicians-hope-florida-benefit-concerts-will-help-them-rebuild/