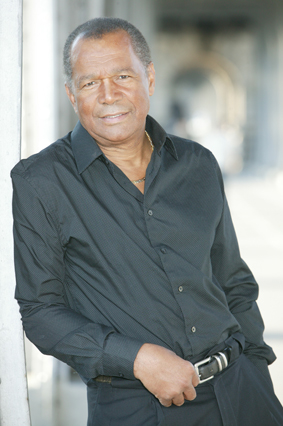 Greg Germain is well known as a director, producer, and actor for film, theater, and television in Europe, as well as for providing Will Smith’s voice in films dubbed into French. Born in Guadeloupe (1947), Germain lives in France, where he is an advisor for the task force Culture et visibilité [Culture and Visibility] for the General Overseas States, creator/director of the Comité pour la mémoire et l’histoire de l’esclavage [Committee for the Memory and History of Slavery], and founder/president of the Théâtre d’Outre-Mer in Avignon (TOMA) and La Chapelle du Verbe Incarné [The Chapel of the Living Word] since 1998 [also see our previous post Avignon’s Théâtre d’Outre-Mer].

He is a staunch supporter of cultural diversity in France. He has always fought for visibility and fair representation of actors and performers from the French Overseas Departments and territories in the media, cinema, audiovisual materials, and live performances.

Germain has just completed a role (as Baku) in a film by writer-director Olivier Baroux, Safari (2009). It is a “coarse comedy [that] travels into the heart of darkest Africa, where a group of motley and eccentric travelers follow a shifty tour guide, gambler” who has not been in Africa for 30 years and is acutely afraid of wild animals. However, his participation in this type of film helps him support his own projects and allows him to accept more interesting, if less profitable, roles. For example, in June, he played the role of Colin Powell in Stuff Happens (written by David Hare and directed by William Nadylam and Bruno Freyssinet), a drama about the road to war in Iraq.

Some of his other screen performances include roles in Rien ne va plus (The Swindle, 1997), Antilles sur Seine (2000), Mais qui a tué Pamela Rose? (2003), and Paul et ses femmes (2008). He is also recognized in France for his 8-year role in the television series Médecins de nuit [Night Doctors] written by Bernard Kouchner.

For more information on Germain’s work, see http://www.africultures.com/php/index.php?nav=personne&no=3613 and http://www.fxgpariscaraibe.com/article-32150330.html

For an interview with Germain, see http://www.rfo.fr/dossiers/etats-generaux-de-loutre-mer/interview-greg-germain-rapporteur-de-latelierculture-et-visibilite_3749.html