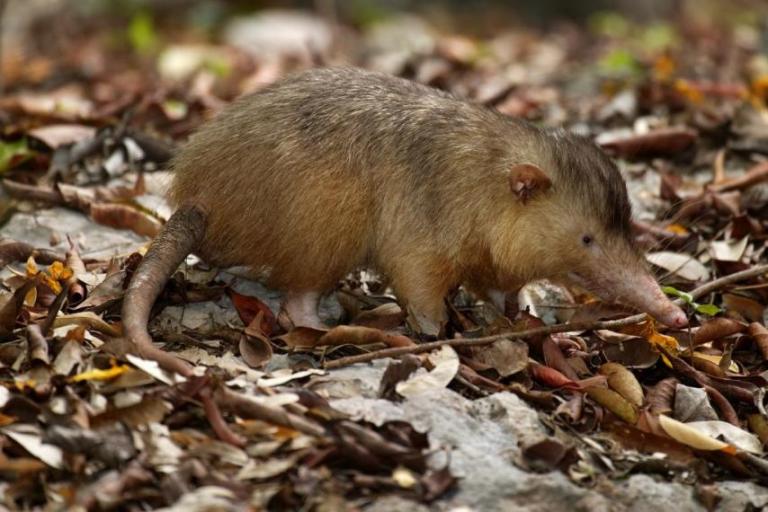 A report by Eladio Fernández for Newsweek

Sixty-six million years ago, a 9-mile wide asteroid crashed into the Earth, wiping out the dinosaurs along with three-quarters of all life on Earth—an event known as the Cretaceous-Paleogene extinction.

With the dinosaurs out of the picture, a small band of hardy mammals who had survived the impact began to thrive. This group included a bizarre shrew-like creature known as Solenodon.

For a new study, published in the open-access, pre-print journal GigaScience, an international team of scientists led by Taras K. Oleksyk from the University of Puerto Rico at Mayagüez sequenced the genome of Solenodon—which today can only be found in a few remote corners of Cuba and the Caribbean island of Hispaniola—for the first time.

They found the genus most likely diverged from other living mammals around 73.6 million years ago, before the devastating asteroid impact.

“We have confirmed the early speciation date for Solenodons, weighing on the ongoing debate on whether the solenodons have indeed survived the demise of dinosaurs after the asteroid impact in the Caribbean,” Oleksyk said in a statement.

The Solenodon genus (or group of species) is interesting to biologists because it represents the sole remaining branch of mammals which split from other insect-eaters at the time of the dinosaurs.

The genus is one of the most ancient branches of the placental mammals—one of the three main subdivisions of mammals containing a diverse group or nearly 4,000 species, including rodents, bats, whales, elephants, shrews and armadillos—and has been described as a “living fossil” because the animal has remained virtually unchanged throughout its 76-million-year history.

Perhaps the Solenodon’s most intriguing feature is its venom. Not only is it one of just a small handful of venomous mammals, the genus is unique in that “it delivers its poison similarly to snakes—using its teeth to inject venom into the target,” the researchers wrote.

The venom is stored in modified salivary glands and flows through special grooves in the sharp incisors when its prey is bitten. A small injection of this venom can be fatal to mice in just minutes and would be very painful to humans, according to the scientists.

Solenodons—which are split into two species: Cuban and Hispaniolan—also have several other primitive and bizarre characteristics, which are unusual for mammals including very large claws, a flexible snout with a ball-and-socket joint (in the case of the Hispaniolan variant) and strangely positioned teats, which are found on their rear.

The nocturnal creatures tend to live in thick forests, seeking refuge in caves, burrows or hollows in the daytime. They are adept at running and climbing, although they have relatively poor eyesight.

To navigate and find their food—usually earthworms and other invertebrates—they use echolocation, or a series of clicking noises which creates sound waves that bounce back off objects, giving them a mental picture of their immediate environment. Despite being small animals, they are easily provoked into fits of biting and screaming when they feel threatened.

Solenodons in both Cuba and Hispaniola are elusive and extremely geographically isolated, which made research for the new study very difficult.

So, the scientists enlisted the help of local experts at the Instituto Tecnológico de Santo Domingo and Universidad Autónoma de Santo Domingo in the Dominican Republic—one of Hispaniola’s two nations—to help them track down and ambush the animals at night.

In total, the scientists took blood samples from six Solenodon specimens of the Hispaniolan variant to sequence its genome—which essentially involves creating a database of all the DNA in the animal.

Both Solenodon species are listed as critically endangered and are facing multiple threats from deforestation, increased human activity and predation by dogs, cats and mongooses.

In light of this, the researchers hope that the recent genomic study will contribute to the protection of Solenodons and their unique evolutionary history, which goes back to the time of the dinosaurs.

For example, the results suggest that Solenodons in the north and south of Hispaniola could actually be different subspecies, meaning they may require different breeding strategies.

“It may now be imperative to study conservation genomics of solenodons, whose extinction would extirpate an entire evolutionary lineage whose antiquity goes back to the age of dinosaurs,” the researchers wrote in the study.