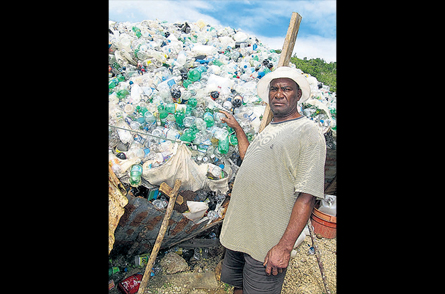 The first thing one may see on entering the residence of Anthony Oxford is the huge piles of plastic bottles in his yard. Oxford said he has been gathering used plastic bottles and storing them in his yard in the deep rural community of Fowler Town, Eight Miles, St Ann, for months now. However, he is yet to find a buyer to supply the thousands of recyclable bottles, as Renae Dixon reports in this article for Jamaica´s Observer.

He explained further that if a market is found for the bottles, this would provide a permanent means of employment for himself and the scores of unemployed youth in the community.

According to Oxford, he first heard about the importance of recycling while watching television earlier this year, and it was then he decided to try and make a steady income from the trade.

However, spending thousands of dollars in petrol to collect bottles is yet to reap any rewards for Oxford, who travels even outside of his community to gather the plastic bottles.

A single parent of a 13-year-old son, Oxford said it is his hope that someone will buy the bottles from him so he can begin earning much-needed income.

The unemployed father, who sometimes transport children to and from school in his minivan, in order to earn a living, said he would like to collect more bottles, but has run out of space at his home.

“If mi get the market fi it mi will continue,” he said, adding that he has since stockpiled approximately three truckloads of bottles.

Oxford said he is willing to sell them at a reasonable price as soon as a reliable market is found.

“Right now if them come, mi will mek a bargain,” he said.

Another disappointment for Oxford is that he used the services of youth in the community to help him collect bottles; however being unable to reward them with money, the young men who face several economic challenges, have become discouraged.

“When dem go wid mi and mi no have no money fi give dem, dem get downhearted,” Oxford said.

For the original report go to http://www.jamaicaobserver.com/news/No-takers-for-recyclable-bottles_13180418