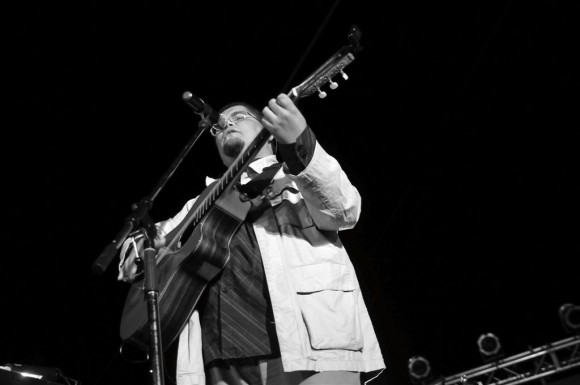 A native of Santiago de Cuba who lives in Havana, Eduardo Sosa is a pure strained Cuban gajiro (campesino). He has the sensibility of a poet and the voice of a mockingbird – that warbler so typical of our fields.

Born in 1972, his first forays into music were made at the age of 12 while “participating in festivals of different student organizations until reaching the competition of the Federation of University Students (FEU), where he won many awards,” he explained.

Eduardo started professionally in 1997 as part of the duo “Postrova.” The musical work of that effort was fascinating, not only for its combining of United States rhythms with Cuban son and guajira music, but the final results, which were well-polished songs full of good lyrics.

When the duo broke up in 2002, Edward resumed his career as a troubadour, but this time with the different style that has characterized his music up to today.

His work and career have been closely linked to young Cubans and the various organizations and institutions that they represent across the island. As such, he’s a member of the Asociacion Hermanos Saiz and its Comision Nacional de Musica.

His repertoire — most of which he’s the author — includes songs, ballads and blues, but mainly Cuban musical styles such as traditional son. It should be noted that he has included in this repertoire, incidentally, songs by other Cuban and foreign composers.

Perhaps his most popular songs are Retoño del monte and A mi me gusta, Compay.

After 30 years of age, the wind starts to blow / but I think there’s still time to defy the clock / to discover mysteries and to have some of them / not to lose the heart and to improve on what happened / after thirty I’d like to walk around / without looking from side to side or feeling any fear / naive me, who’s so wary, naive me.

After thirty, nonconformity continues to drill in / and every day it takes an effort to get going. / The narrowest streets still catch my attention / the closer the walls the bigger the challenge.

After thirty I prefer not finding / it’s better to begin shaping reason, step by step / black and white already had their moment / and there are many more colors.

I dream a lot and sleep much less than times back then. / My wings are being born in your sky. / I give letters to God whenever my two hands / also decide to play the game. / I open both my arms / I know one day death will call / there’s no alternative, and meanwhile…

I impatiently breathe of things to come / planning to find you in every break along the way / hoisting sails though an evil wind is stirring up / for me to stay here in my nest. / After thirty I believe in differences / and I only trust love.

After thirty there’s the grief and disappointment / and these did more damage and had more than one dealing with me / they taught me to walk without a cane / they left me goblins, ghosts and a friend / but right or wrong now I’m not afraid to take risks / and I know that good intentions always attract rumors / I now undo my plans when they start going around / and I keep trying to avoid heartbreak.

The words are full of symbolism as the author speaks of his own experience. He speaks of a crucial moment in our lives when we tend to take stock of our successes and defeats, and when a major change occurs within us.

To new concerns is added the calm that experience offers. We’re more our own owners, and we try to use our powers in those plans that remain to be carried out.

Thirty is an age in which the fire of passion brings us closer to those things that are left to govern our relationship with the world. It’s a time for replacing totems and idols with a more complete understanding of the context in which we live. We don’t turn our backs on our dreams, but these are shifted from the center of our vision and moved to one side. In this way, we begin to live strategically.

Utopias are also seen in a different way, and most of those innocent acts that we commit are permitted by us ourselves.

This transcendental vision of life, so characteristic of younger people, mists up in those early years when we start thinking about old age and death as things certainly possible and nearby.

But we continue being young, nonetheless, still young. We continue having energy, because life is not a game of life and death. That’s why our decisions are made more calmly.

After thirty, in short, into our bag we load lives, goblins, friends and the occasional ghost – things that have made us strong and things we’ll try to avoid up ahead. After thirty is a good time to “pitch camp,” and Eduardo Sosa has done this through his songs.

For the original report go to http://www.havanatimes.org/?p=58533

One thought on “Cuban Troubadour Eduardo Sosa: The Voice of the Poet and the Mockingbird”