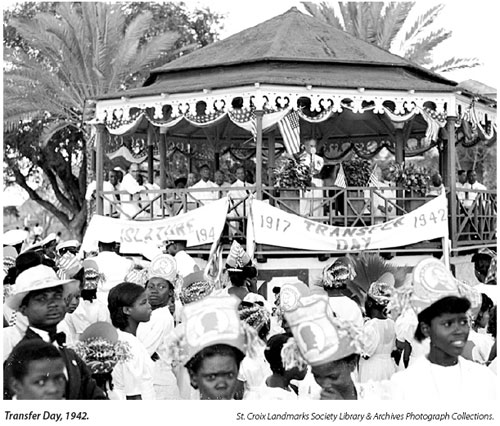 Poetry, song and speech commemorated the 93rd anniversary of Transfer Day on St. Thomas on Wednesday. The territory’s annual observance of Transfer Day remembers March 31, 1917 — the day control of the Virgin Islands territory was officially transferred from Danish to American rule. On that date, the $25 million sale of the territory was finalized. Saren Blak, Danish consul general to the Virgin Islands, spoke at Wednesday’s ceremony. He said Transfer Day is about recognizing the past, learning from it, and moving on. Blak said it is about more than one flag going up and another coming down. It is about learning from history so mistakes are not repeated.
Lt. Gov. Gregory Francis said Transfer Day is about reaffirming the relationship between Denmark and the Virgin Islands. The theme of the 93rd Transfer Day celebration was “Tradition meets 21st Century” and Francis said maintaining the territory’s relationship with Denmark is the way to merge the Virgin Islands’ past with its future. As technology has advanced, the relationship between the two countries has only gotten stronger, he said. Cultural exchanges with the youth, shared historical or genealogical information, and the return of artifacts allow Virgin Islanders to see the close link between the two cultures. “In order to maintain our culture in a 21st century that boasts of globalization, we must preserve and acknowledge the past,” Francis said.
He said it is important to teach young Virgin Islanders about the territory’s Danish roots because it is part of their daily lives — in cultural dances, architecture, and in the strange-sounding names of streets, estates and even local families. “This, along with our American sensitivities, distinguishes us from the rest of the Caribbean, and the world, and we remain extremely proud, despite the struggles, of this extraordinary bond,” Francis said.
During the ceremony, the crowd enjoyed several musical selections from the Gladys Abraham Elementary School Choir and two poems read by Jahweh David. As the event wrapped up, the traditional flag exchange took place at the same time and location that it did in 1917. At 4 p.m. on the grounds of what is now the V.I. Legislature on St. Thomas, the red and white Dannebrog — the Danish flag — was lowered to the sound of Denmark’s national anthem. The flag was folded and presented to Blak.