Ahead of Kate and William’s reported trip next month, Tatler looks back at the many times that Her Majesty the Queen and her relatives have visited the Caribbean, long considered an important stop on the Commonwealth tour

A report by Rebecca Cope for Tatler.

Next month, the Duke and Duchess of Cambridge are thought to be embarking on their first royal tour in two years, visiting the Caribbean. It will be the first time that the couple have visited many of the Commonwealth nations there, having previously been to Australia and New Zealand, as well as the US and Canada. The trip is part of a planned charm offensive during the Queen’s Platinum Jubilee year, with the young and charismatic duo set to showcase their unique brand of modern royalty.

Her Majesty’s first visit was in her Coronation year, 1953, highlighting just how important she regards these nations as being. In that year, she travelled first to Bermuda and then to Jamaica. She did not return until February 1966, when she took on a more all-encompassing tour of Barbados, Trinidad and Tobago, Saint Lucia, Grenada, Saint Vincent and the Grenadines, British Guiana, Dominica, Antigua and Turks and Caicos. She made the trip again in 1975, taking in Bermuda, the Bahamas and Barbados, returning once more in 1977. She visited twice more in the 1980s, and once in the 1990s, with her last trip being in 2009 to Trinidad and Tobago and Bermuda.

Since then, she has handed the baton of royal travel on to the next generation, including her son, Prince Charles, and his wife, the Duchess of Cornwall, who have visited several times together in 2017 and 2019. The heir to the throne’s last trip was just last December, when he bore witness to Barbados becoming a republic.

Prince Harry, pre-Megxit, was also dispatched to the Caribbean. He undertook a tour to Jamaica in 2012, famously racing Usain Bolt, and in 2016, undertook a two-week, seven-country trip in honour of the Queen’s 90th birthday (where he met with Rihanna in Barbados).

Scroll down for a visual history of the Royal Family’s tours to the Caribbean to date. 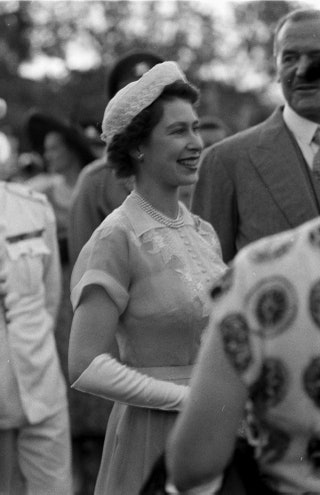 Queen Elizabeth II socialising with people during her visit in Bermuda, 1953. 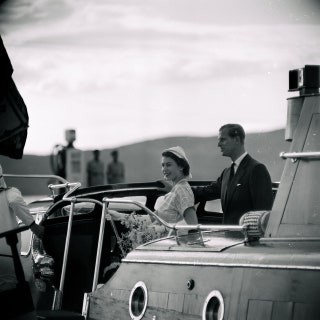 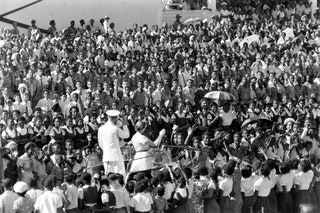 Crowd waiting for the arrival of Queen Elizabeth II and Prince Philip in Jamaica, 1953. 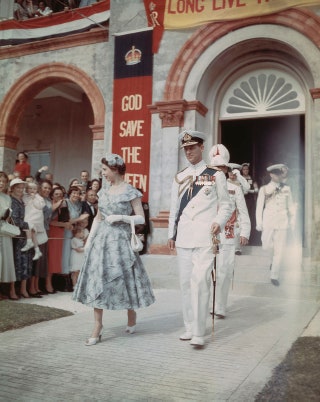 Queen Elizabeth II and Prince Philip, Duke of Edinburgh leave the House of Assembly in Hamilton, Bermuda, during a six-month tour of the Commonwealth nations, November 1953. 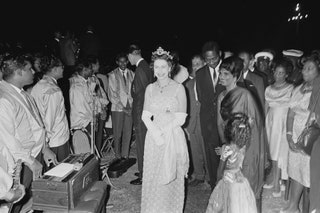 Queen Elizabeth II at a reception given by Forbes Burnham (1925 – 1985), the Prime Minister of Guyana, in Georgetown, British Guyana, during a royal tour of the Caribbean, 7th February 1966. Prince Philip is at centre, left, while Burnham and his wife Viola are at centre, right. 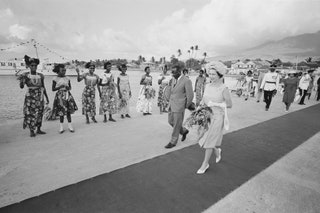 Queen Elizabeth II arrives in Saint Kitts during a royal tour of the Caribbean, February 1966. 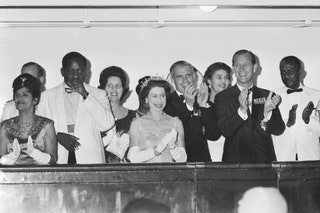 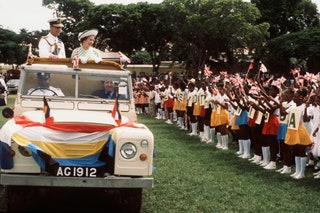 Queen Elizabeth ll and the Duke of Edinburgh drive among the crowds during the Royal Tour in the Bahamas in 1977. 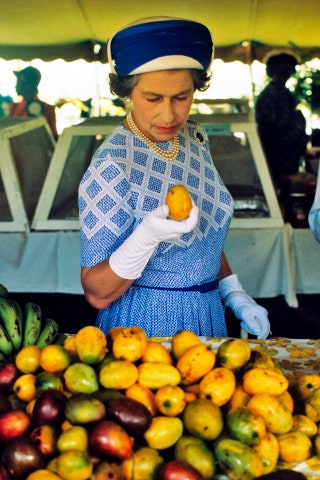 Queen Elizabeth ll picks up a mango as she tours a market in the British Virgin Islands in October of 1977. 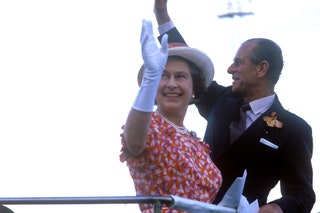 Queen Elizabeth II and the Duke of Edinburgh arriving in the Bahamas, 1985. 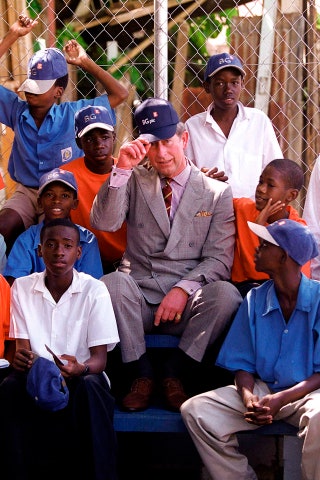 Prince Charles visiting a refuge for abandoned children in Trinidad, 2008. 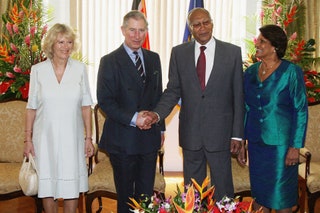 The Duchess of Cornwall, Prime Minister Patrick Manning, Prince Charles and Hazel Manning pose for a photograph at the Prime Minister’s residence on the first day of a three day tour of Trinidad and Tobago in 2008. 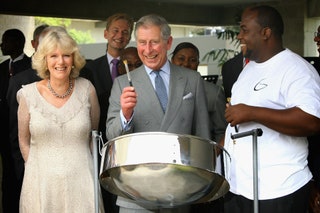 The Duchess of Cornwall and the Prince of Wales play the steel pans at The University of the West Indies St Augustine Campus on the second day of a three day tour of Trinidad and Tobago in 2008. 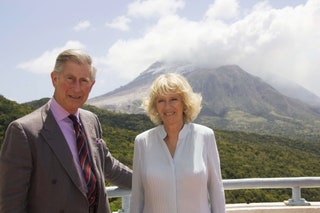 The Duchess of Cornwall and Prince Charles visit the Volcano Observatory at Soufriere Volcano in Little Bay, Montserrat, 2008. 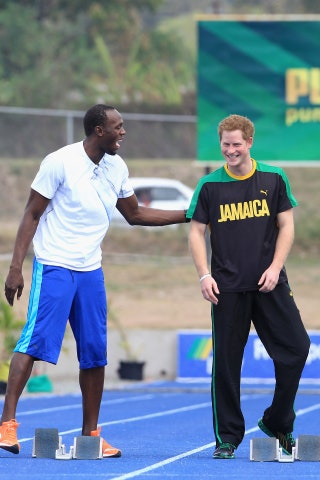 Prince Harry races Usain Bolt at the Usain Bolt Track at the University of the West Indies in 2012. 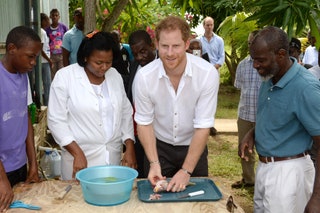 Prince Harry visits the Sir McChesney George High School during the third day of his tour of the Caribbean in 2016. 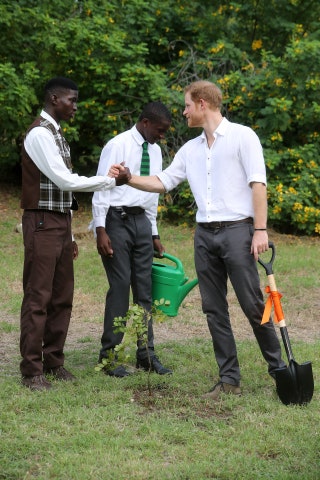 Prince Harry arrives for the unveiling of the dedication to The Queen’s Commonwealth Canopy and Arbour Day Fair at Queen Victoria Park Botanical Gardens on the third day of an official visit to St John’s, Antigua and Barbuda in 2016. 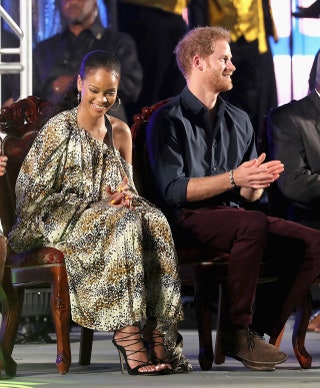 Prince Harry and Rihanna attend a Golden Anniversary Spectacular Mega Concert at the Kensington Oval Cricket Ground in Bridgetown, Barbados on day 10 of an official visit to the Caribbean in 2016. 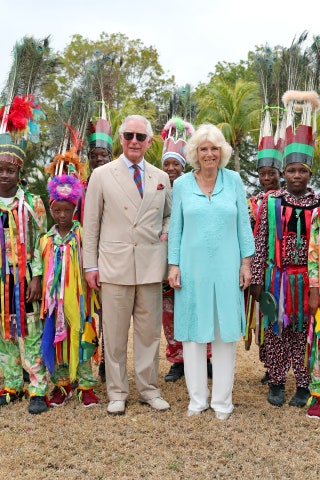 Prince Charles and the Duchess of Cornwall attend a reception at Government House in Nevis, St Kitts, in 2019.