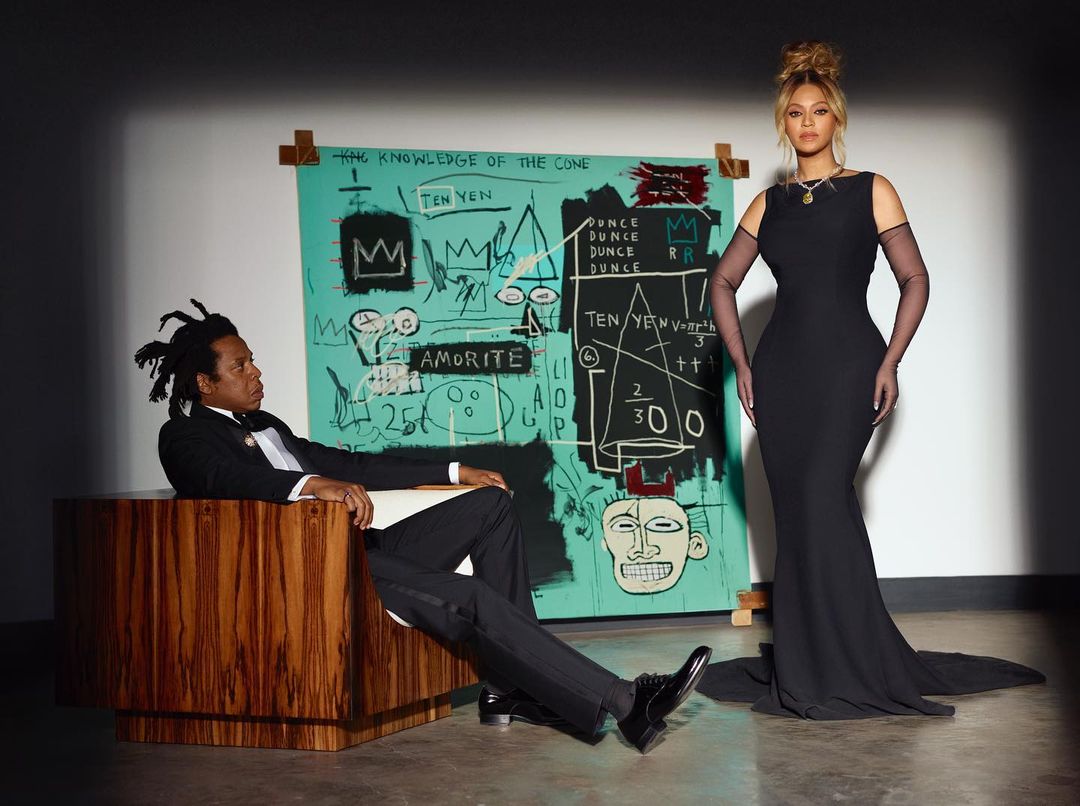 A report by Akriti Sharma for Prestige.

While the singer-songwriter became the first black woman to wear the diamond necklace, another thing that caught our eye was Basquiat’s painting, making its first public appearance, with its unmissable background colour sporting the exact match for Tiffany’s signature robin egg blue.

The painting was recently purchased by the brand from a private seller. In an exclusive interview, the jeweller’s executive vice president Alexandre Arnault told WWD, “We don’t have any literature that says he made the painting for Tiffany. But we know a little bit about Basquiat. We know his family. We did an exhibition of his work at the Louis Vuitton Foundation a few years back. We know he loved New York, and that he loved luxury and he loved jewellery. My guess is that the [blue painting] is not by chance. The colour is so specific that it has to be some kind of homage.”

While the campaign featuring the Carters is set to be officially released on 2 September, let us get to know some lesser-known facts about the acclaimed Jean-Michel Basquiat and his stature as an intense artist.

Born on 22 December 1960 in Brooklyn, New York, US, Basquiat had Puerto Rican and Haitian roots and could fluently speak English, Spanish and French. He was extremely gifted and as a child prodigy, joined the membership of the Brooklyn Museum at age six.

At age 17, he dropped out of high school, after which his father kicked him out of home. He moved in with his friends and sold sweatshirts and painted postcards to make a living. At that time, he thrived entirely on inexpensive red wine and Cheetos.

He was known to paint on just about anything – from discarded doors to the scraps of canvases and walls.

Before he started painting professionally, he had already become a famed graffiti artist. Basquiat was inspired by the renegade artwork scene in New York in the ‘70s and created “SAMO” (a slang meaning ‘same old sh**’) with his friend Al Diaz.

They began featuring the moniker SAMO© on their graffiti artwork which grabbed eyeballs at the time. SAMO was his alter-ego, and he soon parted ways with an antithetical announcement through graffiti tags: “SAMO is dead.” After this, he cemented his reputation as a professional artist.

Basquiat’s signature motif is the “Crown” with essentially three peaks. The signifier featured in many of his early artworks, especially black marginalised talents, and adorned them with a royal stature. The peaks of crowns are said to depict Basquiat’s three royal lineages — the musician, the poet and the boxing champion, according to artist Francesco Clemente.

Basquiat’s first ever painting, titled Cadillac Moon, was purchased by the lead singer of pop band Blondie, Debby Harry, and her boyfriend Chris Stein for US$ 200 (RM839) in 1980.

He also appeared in a cameo in Blondie’s music video “Rapture” the same year. Later, Basquiat produced a rap record Beat Bop in 1983 with Rammellzee and K Robb and designed the album’s cover too.

Basquiat’s 1982 painting Untitled broke all records when it was sold at the Contemporary Art Evening Auction and purchased by Yusaku Maezawa, who won the bidding at a whopping US$ 110.5 million at Sotheby’s (New York) in 2017. This led Basquiat to become the highest-paid American artist at an auction.

Basquiat met artist and his mentor Andy Warhol in 1981. Both artists collaborated for graffiti and paintings for a brief period between 1983 and 1985, which saw Basquiat’s exceptional graffiti art blended into Warhol’s vibrant imagery.

Around 1982, Basquiat and pop queen Madonna dated, but their relationship was short-lived. After calling it quits, he asked Madonna to return all his paintings and painted them all black.

In 1988, the 27-years-old talented artist died of an accidental drug overdose at his Great Jones Street studio, New York City.

Basquiat once said, “I’m not a real person. I’m a legend.”

Known for his influential work as a Neo-expressionist artist, he is celebrated as one of the most prominent artists depicting this movement to date, but he wanted to make paintings that looked as if they were made by a child.

His work resonated with visual imagery, motifs, abstract and expressive graffiti in diverse styles and painting techniques. Today, he is recognised alongside iconic artists like Pablo Piccaso and Francis Bacon.

Rapper Jay-Z also mentioned him in his song, Picasso Baby, which was nominated for a Grammy Award in 2014. The lyrics of the 2013-song go as, “It ain’t hard to tell, I’m the new Jean-Michel.”

One thought on “Things to know about Basquiat, the artist featured in the Tiffany & Co. ad campaign”