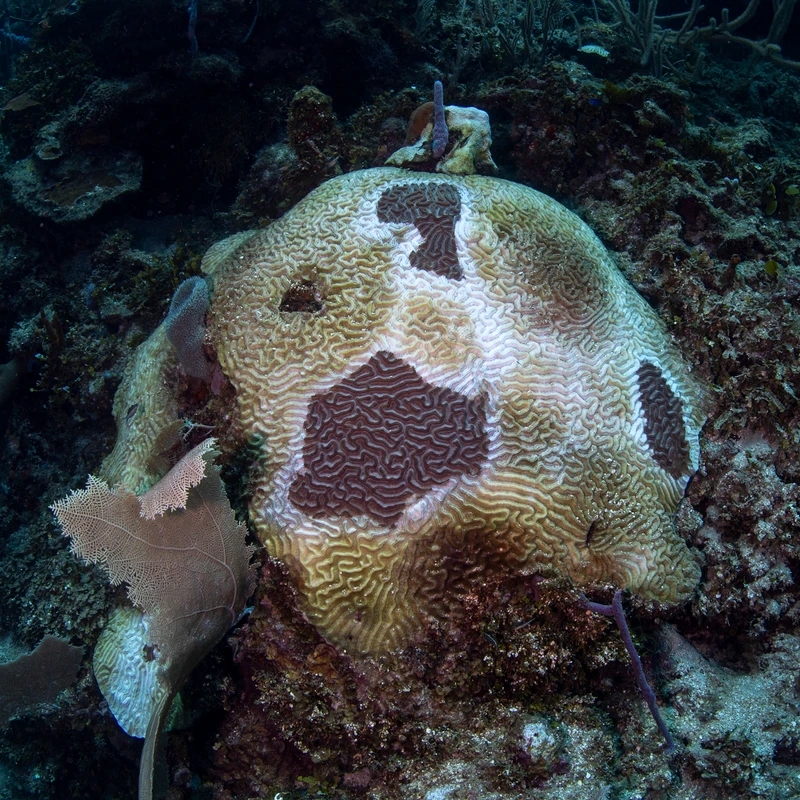 The devastation caused by the disease is unprecedented. “You can lose colonies that were growing for hundreds of years in just weeks or months,” said one expert.

A report by Jeff Ernst for Vice.

A mysterious, highly contagious and lethal disease is spreading across the coral reefs of the Caribbean Sea, alarming scientists and leaving a trail of skeletons in its path.

Its advance from Florida to the far reaches of the Caribbean could wipe out the majority of the hard coral across the sea, decimating reefs and the marine life they support for generations to come. The environmental damage would also disrupt the lives of millions of people in coastal communities who depend on the reefs for food or jobs. ADVERTISEMENT 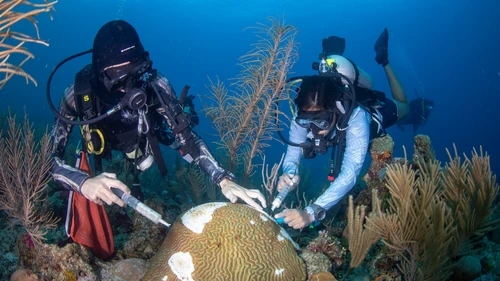 While other more well-known factors such as pollution and climate change have caused the loss of an estimated 60 percent of coral coverage in the Caribbean over the past three decades, the new disease is killing it at a much faster rate.

Once a colony is infected, death can come very quickly. “You can lose colonies that were growing for hundreds of years in just weeks or months,” said Melina Soto, Mexico Coordinator for the Healthy Reefs Initiative.

SCTLD was first discovered in 2014 off the coast of Florida, where it has since infected roughly half of the state’s reefs. The cause is unknown but humans are a likely culprit.ADVERTISEMENT

Theories divide along two main tracks. The first is that factors such as climate change and rising sea temperatures along with contaminants like untreated sewage and even sunscreen have reduced the reefs’ resiliency, making coral susceptible to existing bacteria. The second centers around the idea that a new pathogen emerged as a result of human activity.

In the end, the answer could be all of the above. “Like COVID, when you have other health problems, then you’re at higher risk when you get COVID,” said Ochoa.

Over the past seven years, the disease has spread across the Caribbean Sea, often traveling against currents, which suggests that the pathogen may be reaching new areas by clinging to boats. “One of the points that almost always repeats itself is that the first cases are found near ports,” said Soto.

In 2018, SCTLD was discovered in Mexico off the coast of Puerto Morelos, situated between the tourist hotspots of Cancun and Playa del Carmen near the northern tip of the Mesoamerican Reef — the world’s second largest. The disease has since spread hundreds of miles along the reef’s hard coral colonies all the way to its southernmost point around the Bay Islands in Honduras, where it was first detected in September 2020.

Brain corals have been the most affected, according to the Healthy Reefs Initiative, and the disease has put one rare species, pillar coral, at the brink of extinction. The first sign that a coral is infected is the appearance of a small lesion where the tissue, or the skin, is absent, revealing the bone. As the disease progresses, the coral is stripped of all tissue, leaving nothing but a dead skeleton.

Once an infection is present, the disease can spread across a reef system from coral to coral, or by fish or scuba divers hopping from an infected site to a healthy site.

Mitigating the effect is a costly, nearly insurmountable task. An antibacterial cream that is applied to the lesions has shown some success in stopping an infection, but it doesn’t provide any immunity to subsequent infections and the application is extremely labor intensive and expensive.

Instead, organizations are building coral nurseries in water tanks on land to conserve genetic diversity and breed new species with the hope of restoring reefs in the future. But with growth rates of just a couple centimeters per year, full restoration could take hundreds, if not thousands of years.

Soft corals, such as the elegant fan corals that sway with the current, are not affected by SCTLD. But the loss of hard corals is about more than just their genetic diversity. World News

Hard corals are “reef builders” that are essential to a reef’s formation. As the hard corals die off, they erode and compact, reducing the protection against coastal erosion, flooding and hurricane storm surges provided by the reefs. Declining coral cover is also a loss of habitat for marine wildlife, including some 1,500 species of fish.

The damage to the Mesoamerican Reef and others across the region will have an impact that extends beyond the sea. “If we don’t have corals, then we don’t have everything else associated with them,” said Ochoa. Reef-related tourism alone generates about $8 billion for Caribbean economies each year.

Although there have been massive coral die-offs in the past, as well as other diseases that have affected reefs, the devastation caused by SCTLD is unprecedented. “We’ve never seen 23 different species of corals getting sick at the same time,” said Ochoa.

In many places, coral coverage has been reduced to half of what it was before the disease arrived and algae is taking over. What once was a flourish of bright colors is now dull and green.

The spread of such a contagious and lethal disease foreshadows a similar fate for reefs across the Caribbean Sea. “Reefs as we knew them will no longer be” in existence, said Ochoa.

One thought on “Caribbean Reefs are Dying from a Mysterious Disease”