A report by Annie Armstrong for Garage.

While most art galleries and museums were all closed during the first months of quarantine, upstate New Yorkers still had a place they could go see art. Sprawled over 120 acres of hilly, lush, and tick-infested forest, Art Omi is perhaps the ideal social-distanced art setup. Thus, while the rest of the art world was at a soul-crushing standstill, Art Omi was even able to commission a new work. Better yet, it commissioned a work that functioned as a way for the community to come together—or at least the skating community. Chemi Rosado-Seijo’s Mahican Pearl Hole (Mahican Bowl) was built over the summer, and its story is a testament to just how resilient and close-knit the skating community is. The work is a skate bowl.

“Skateboarders are the global modern community that work from the margin, in unexpected places and sites, mostly leftovers from modern architecture, like empty pools, banks, alleys, pipes parking lots and so on,” Rosado-Seijo explained. The piece belongs to a larger series of his titled History on Wheels, which explores the intersection of art history with skateboarding history. This work specifically draws on the negative sculptures of Michael Heizer, Soviet brutalist architecture stylings, and Rirkrit Tiravanija’s immersive, sociable work with relational aesthetics.

More than that, though, the rocks leading up to the bowl create a circular form that references Indigenous rock formations, specifically drawing from bateys, which is a type of plaza that the Taino people of Puerto Rico and the Caribbean built for community events. 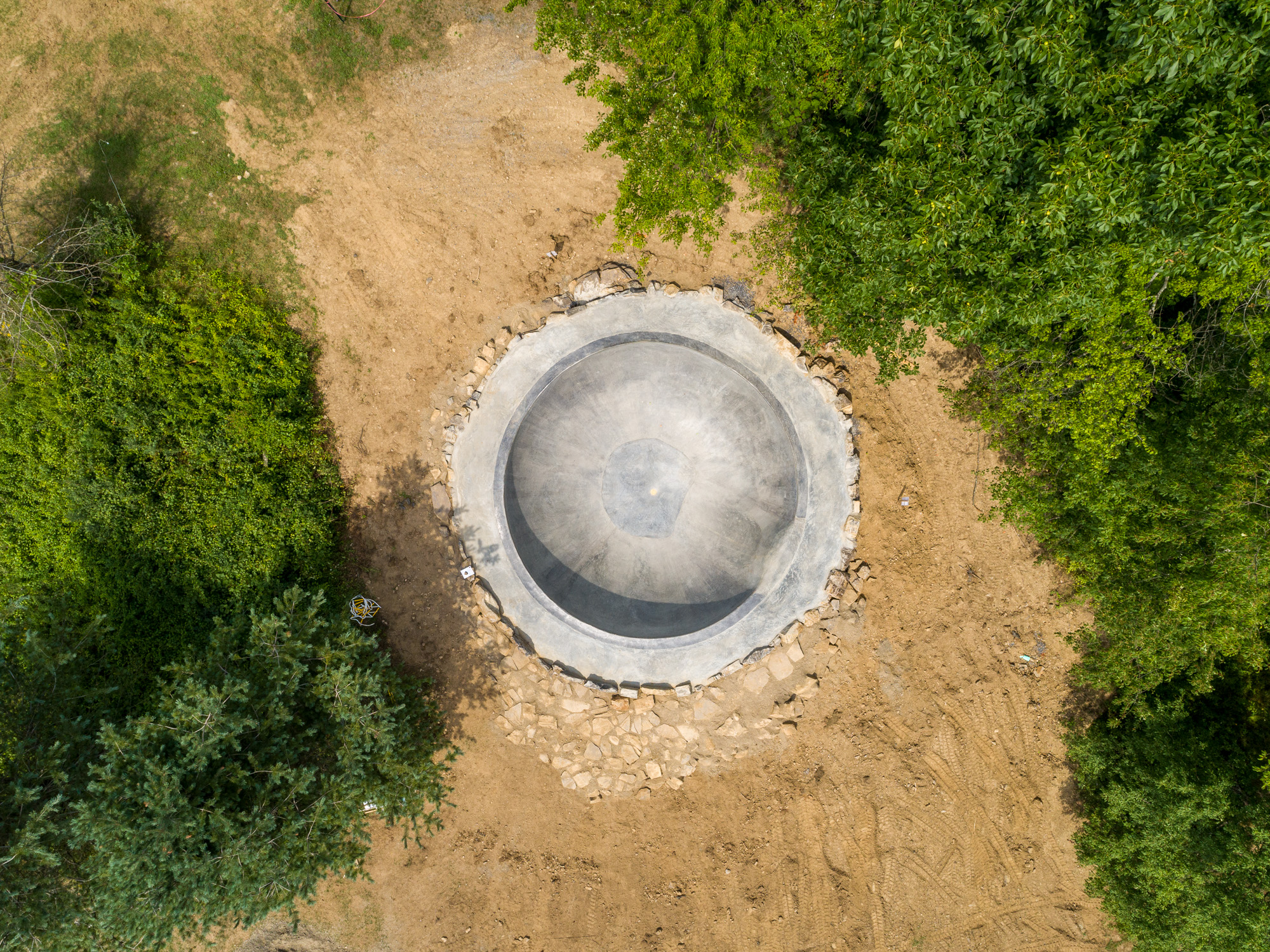 “The batey was an important site for gathering, playing, performance, and spiritual rituals,” explained Rosado-Seijo. The piece’s name is an homage to the Mahicans, a culture and people that were colonized and eventually wiped out to build the Port in Hudson. Rosado-Seijo added, “For me the first thing to do with my piece was name it to honor and recognize those who were here and bring that history to the surface and at the same time connect it with my own history and heritage of Borikén.”

While the history of the land that the piece sits on and the history of structures similar to it are central to the piece, so is the process that went into creating it. For the fabrication, Rosado-Seijo called on a veritable underground network of skaters to find people who could both pour the concrete and then skate on it.

“This piece is so special,” said Kahn, the Hudson-valley local, who specializes in building skateparks. “What’s so cool about it is that most other skateparks, people just walk right by it and don’t really notice it. This will always have an audience that really sees it and has an experience with it.” 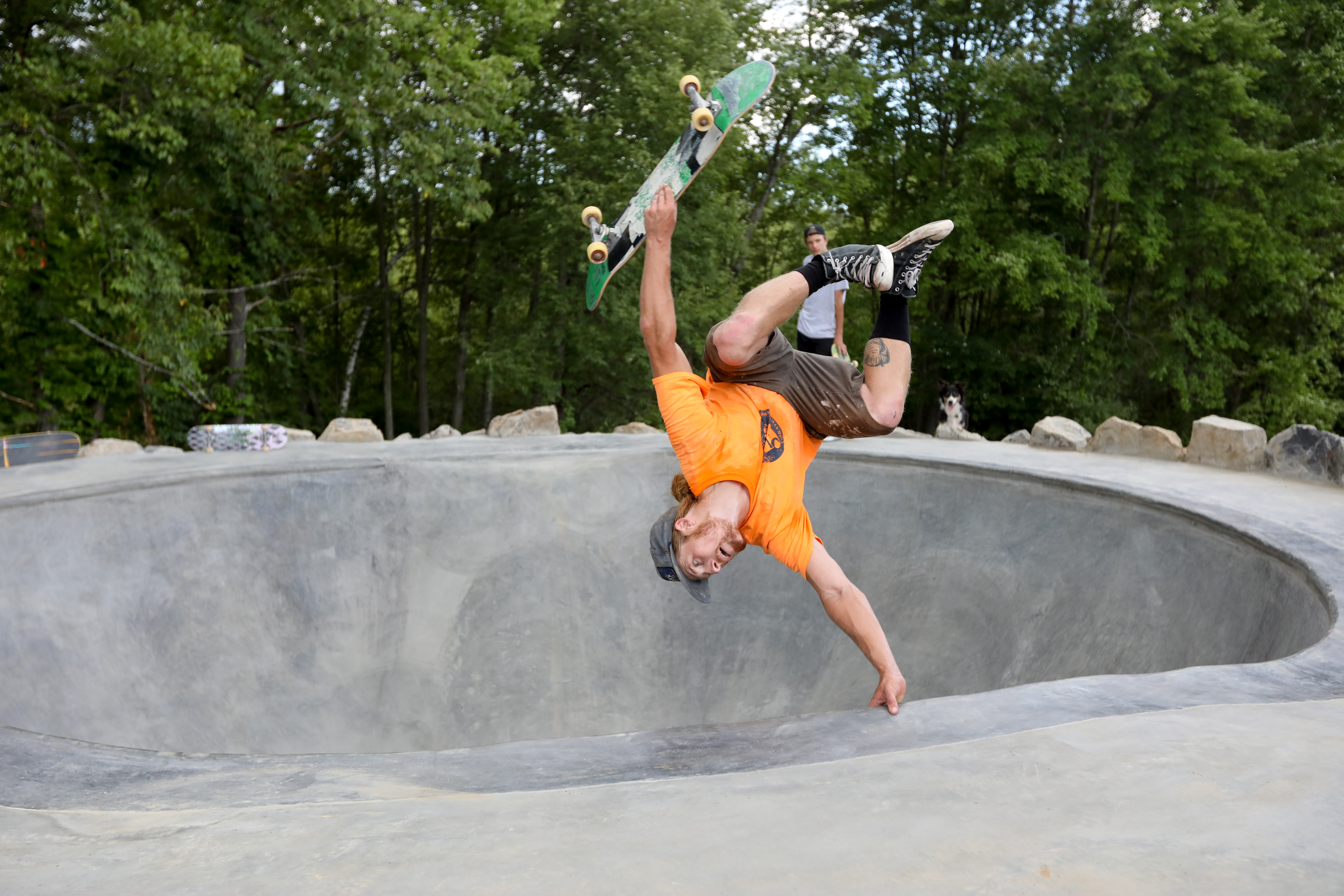 The bowl is nestled in an enclave of trees, with some Dan Colen M&M sculpturesbeckoning the eye out yonder, and kitty corner to a cheeky David Shrigley tomb, Memorial, which outlines what might be the artists grocery list. One skater who helped Kahn build the piece remarked that when its not in use, they lower down a miniature ladder for the chipmunks and squirrels that would wander down there and, due to how steep it is, have no way to get out. Seeing the skaters riff in the bowl was impressive enough, but watching them hoist themselves up the steep incline was almost equally masterful.

Art Omi as an institution emphatically doesn’t sell works shown on the premises, and for Mahican Pearl Hole (Mahican Bowl) specifically, they consider the profits of the piece going to the creators of it themselves, as they now have a new place to skate (who they also paid fair wages to and provided housing for during its construction, its worth noting). Chemi also noted of the process behind the piece that it “brought an opportunity for us as a community of boarders/builders, to show how it should be done. A series of relationships that were already cultivated in his previous project in the USA, led to a trust between the participants, that not only wanted to build the bowl but also wanted to ride.” 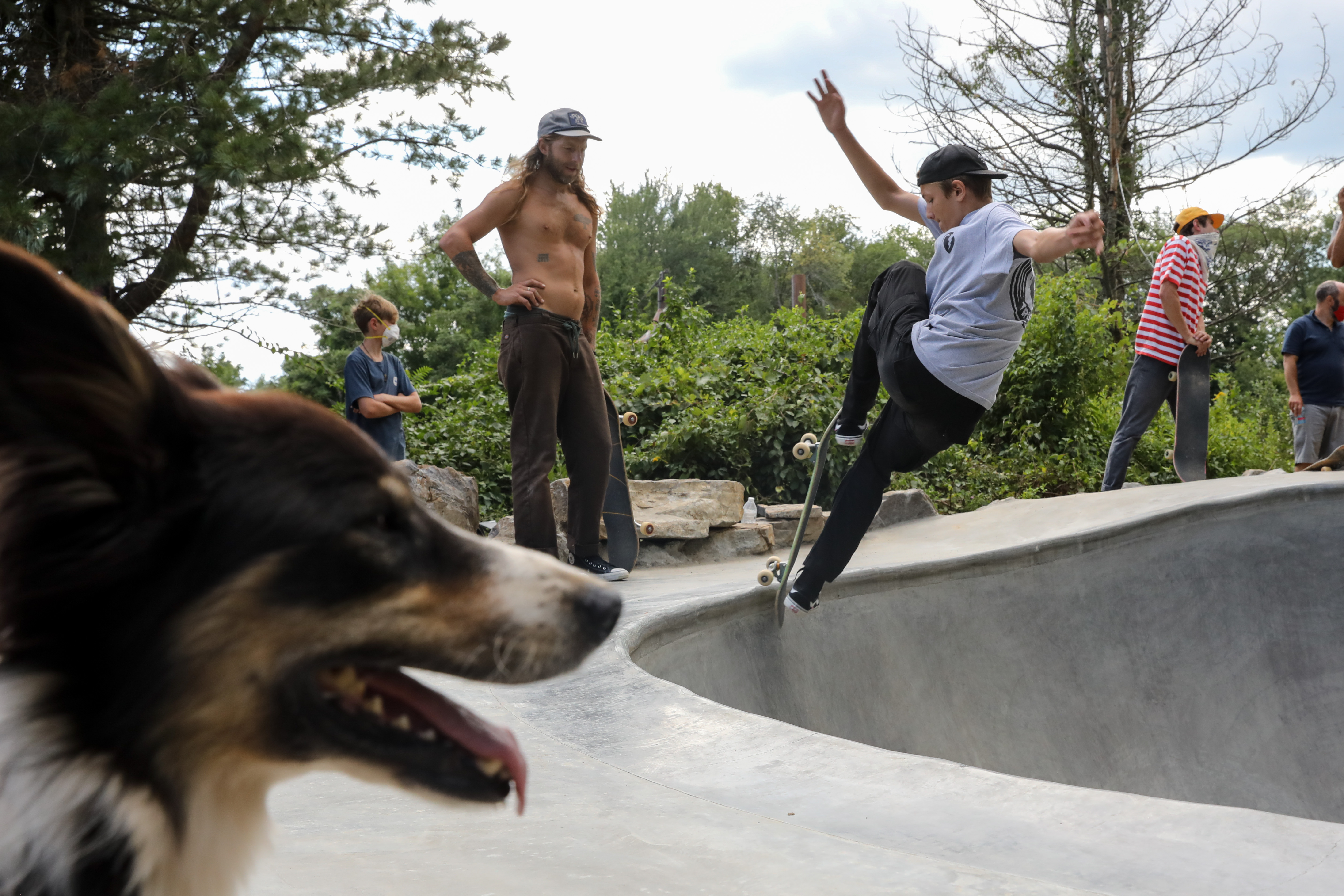 Finally, in mid-August, the piece was ready for action. A group of mask-wearing art lovers gathered around Mahican Pearl Hole (Mahican Bowl) to watch a crowd of local skaters, most all of whom helped build the piece, including Kahn, dip in. “It’s non-stop in there!” said an out-of-breath Kahn. Behind him, 15 year-old prodigy Cooper Qua seemed confused by the crowd of upstate art-types, and when asked if he’d ever skated in a piece of fine art before, he responded timidly, “Uh…not like this before.”