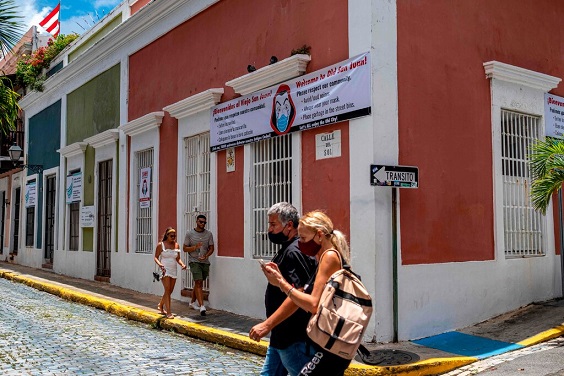 Nina Burleigh writes about the dilemma of reopening for tourism in the Caribbean. She posits, “Many islands are open to American travelers. Going could mean bringing coronavirus to places ill prepared to deal with it. Not going could mean deepening economic woes. How do you choose?” See the full article at The New York Times.

Last year, more than 31 million people visited the Caribbean, more than half of them from the United States. I was one of them. Together, we contributed $59 billion to the region’s 2019 gross domestic product — accounting for a whopping 50 to 90 percent of the G.D.P. for most of the countries, according to the International Monetary Fund.

I admit that in moments of pandemic weariness I have been one of those people eyeing cheap tickets to the Caribbean, wondering when I might feel ready to jump on a flight.

Now, though, our business comes with a mortal threat — that for the sake of a vacation we will bring the coronavirus to islands that are ill prepared to handle a major outbreak. But staying home could be equally ruinous. The Covid-19 lockdown — and the severity of the epidemic in the United States — has been a disaster beyond any hurricane for the Caribbean economy. The pandemic has closed airports and cruise ship docks, shut down restaurants and dive shops and deprived the Caribbean of tens of billions of dollars.

“To not have visitors arriving for any period of time, but particularly for an extended period of time, has brought immense hardship to a number of people throughout the Caribbean,” said Hugh Riley, the former head of the Caribbean Tourism Office, and a partner with Portfolio Marketing Group, which represents some islands. “Caribbean countries face an important dilemma: Try to hermetically seal their borders from visitors until there’s an effective vaccine, or tackle the risks of restarting tourism now. It is the classic risk/reward decision,” he said.

As of August 3, 22 islands in the region have reopened to tourism, with 14 allowing visitors from the United States — with negative Covid-19 tests and, usually, periods of quarantine. It has not always gone smoothly: The Bahamas allowed Americans to visit beginning in July, slammed the door shut as coronavirus cases surged in that nation, reopened and then this week shut down again, indicative of the efforts to manage a moving crisis. Puerto Rico opened to Americans from the mainland on July 15, but pushed that date back to August 15 after a weekend of viral videos showing incoming visitors ignoring mask and social distancing rules. On the other end of the spectrum, Barbados is offering a 12-month visa to any American interested in moving a work-from-home office to the island.

Tourists looking to escape to a coronavirus-free tropical island have a responsibility to weigh the risks and take precautions.

So does the airline industry, says Allen Chastanet, the prime minister of St. Lucia and a former airline executive nominated by CARICOM, the 20-nation Caribbean consortium, and the Organization of Eastern Caribbean States to develop recommendations for reopening the region. Mr. Chastanet has been urging the airlines to push for the development and implementation of rapid preboarding airport testing for all passengers.

“You have to have testing sites, the way you have a Dunkin’ Donuts kiosk in every airport,” he said. “The airlines in many ways acted like they had ostrich syndrome, and said it is somebody else’s problem, but ultimately it is their problem. They have to use their advocacy strength to make it happen.”

Tourism has always been a two-edged sword for the region. It brought money for some, but also brought corruption, environmental degradation and unchecked development. No tourist who steps outside an “inclusive” resort can fail to notice the incredible disparity of wealth on the islands: palatial walled estates are often a stone’s throw from cement block shacks. Crime is such a problem on some Caribbean islands that websites are devoted to statistics to help worried travelers shop for the safest destinations. (I can attest to this problem, having been burglarized in Tobago and Vieques.) The BBC once called Jamaica “the murder capital of the world,” to howls of outrage from the Jamaicans. [. . .]

The cruise industry always had the upper hand on the islands. [. . .] The Dutch island of Bonaire is one of the ports of call for behemoth and often super-discounted cruise ships plying the Caribbean. In the last few years, two building-size ships have daily disgorged up to 4,000 passengers at a time during the cruising season. The ships have sometimes sparked food shortages by taking up dock space needed for cargo. Now, in the pandemic lull, tour providers, officials and some citizens have been quietly discussing what to do about the ships when they return. Facebook groups like Bonaire Future Forum: Opportunity From Crisis are debating whether the island should limit access to specific ships that cost more and are therefore more selective in their choice of passenger. [. . .]

[. . .] The island has one of the most pristine reefs in the Caribbean, and animal behavior has changed since the number of daily human divers dropped from thousands to the single digits. Local divers are noticing animals come closer, and the elusive seahorse has been a common sight these last months.

The pandemic has already changed life by necessity. The Caribbean has a “ridiculously high” food import bill because of an assumption that tourists don’t want to eat local food, Mr. Riley said. The pandemic may change that. “We have been laboring under the misconception that tourists want something other than what we have. We think people want hamburgers and hot dogs. Now that we are consuming what we have, I think this will lead to an increased variety in what we produce locally,” he said.

Sven Olof Lindblad, the chief executive of Lindblad Expeditions, which offers high-end, small-ship, environmentally conscious cruises around the world, sees the pandemic as a moment in which destinations can seize control of the downside of overtourism and demand changes. “This clearly is a time to rethink — but it won’t be led by businesses who are, by and large, too fat and happy with the way it is. Create working groups to totally rethink the relationship of tourism focused on value — and not just financial value.” [. . .]

[Photo above by Ricardo Arduengo/Agence France-Presse; Getty Images. Puerto Rico reopened to travelers from the American mainland in July, then pushed the date back a month over concerns about whether travelers would follow mask policies.]