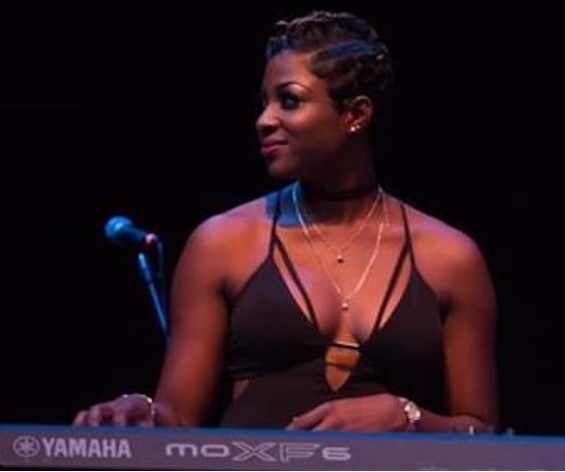 The instrument Danielle Brathwaite thought was “boring” as a little girl is the same one which is now at the centre of all her hopes and dreams.

The 23-year-old pianist/keyboardist told Bajan Vibes that while she took piano lessons at an early age, she didn’t like it at the time.

“I started playing the piano when I was a little girl. Even though I don’t remember how old I was at the time, I recall many evenings after primary school with my classical tutor, who lived a few houses away from my home at the time. However, as time passed, I remember telling my parents I didn’t like it anymore and how boring it seemed. Little did I know that as a teenager the very said instrument would capture all my interest,” she said.

It was while at Christ Church Foundation School when she was fooling around in the music room that her connection to the instrument was rekindled. “One afternoon during lunch in the music room at school I was ‘doodling’ around on the keyboard and the music teacher asked if I wanted to be a part of the school’s all female pop band. My response was, ‘Me? Sir, I don’t really know much.” At the point in time, I recall only knowing my scales. He responded and said, ‘That’s ok, you can learn’.”

She added: “The following day I turned up for rehearsal, excited to learn. It was really the rehearsal that was scheduled to happen after that has truly inspired me. Before rehearsal was finished, a lot of people came to the room that I didn’t know and I wondered who they were and why they were crowding.”

Danielle recalls how swiftly it all changed at the rehearsal. “I remember how nervous I was when I saw Biggie Irie come in. Then I figured they must be rehearsing for a show. After about five minutes listening to their rehearsal, I was convinced this was what I wanted to do for the rest of my life. Even though it was a rehearsal, the energy, the vibe and their passion were all there. I could tell they all were doing it simply because they loved it and it made me want to as well.”

Danielle has an Associate Degree in Music from the Barbados Community College, where tutor Andre Daniel and others have been an integral part of helping her to hone her craft. She also continued classical training with Susanne Henry.

“Darien Bailey and Mr Daniel, also known as DreDan, are some of the many musicians who have influenced me locally and are always willing and ready to share their knowledge of the art. Brian Culbertson and Stevie Wonder are also some of my international influences. Way more than he knows it, Arturo Tappin has been a huge influence both directly and indirectly.”

One thing that stands out for the young musician is her tutelage and working relationship with Arturo.

“Countless times I have been given advice from numerous musicians, especially on the business side of things and within the same breath have heard ‘Turo showed me that.’ I remember being extremely nervous calling him for advice, and even more so being called to work with him. It was a great experience, though nerve wracking to be backing an artist of his calibre.”

Danielle Ioves all genres of music. She confesses that it is hard to choose a favourite, but she enjoys funk the most. With her talent, she has graced many stages.

“I have had the opportunity to play at Reggae on the Hill, Soca on the Hill, Pan Fusion, Island Mas and Honey Jazz, just to name a few. I received a call from the drummer/band leader from The Element Band (backs local artiste Marzville) one afternoon about joining the band. I also work with other bands – Altered 5th, Triad which consist of drums, keyboards and steel pan, Z.E.S.T The Band and the Mylon Clarke Project.”

Her ultimate goal is to allow her musical talent to take her beyond Barbados’ shores. “I would love to tour the world doing what I love. Across the world there are many different languages, but one language we all understand is music.”

But in the meantime, while living and working here, she believes much can be done to better the music industry, especially for females. [. . .]

She added: “As a female instrumentalist, I also think the playing field can be levelled. Many occasions in rehearsal or on a show people are shocked to see a ‘female in the band’ or automatically think when something sounds really good, it was ‘the other keyboardist’. People also automatically assume I’m the vocalist. [. . .]