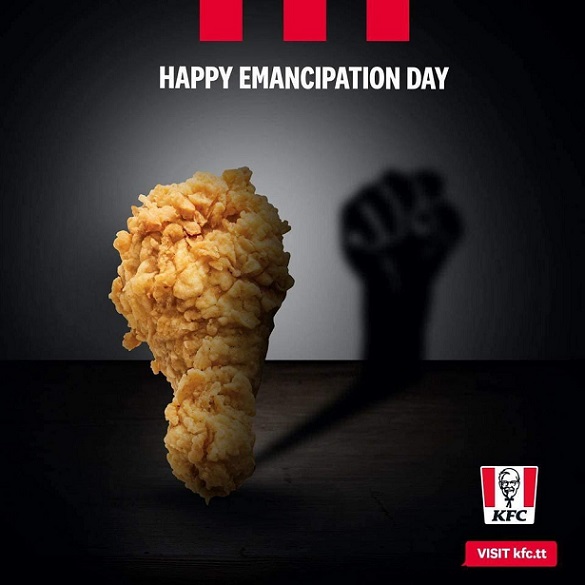 Buzz-Caribbean reports that KFC Trinidad has issued an apology to citizens following a full day of backlash towards a post intended to commemorate Emancipation Day on August 1. [Many thanks to Peter Jordens for bringing this item to our attention.]

The post, published on its social media pages on Saturday, was captioned “KFC wishes you a happy Emancipation Day”, however, the imagery was what triggered a wave of criticism as several Trinidadians viewed it as insensitive.

The artwork, which has since been deleted, depicted KFC’s famous spicy chicken drumstick, with the silhouette of what appeared to be a hand in the background displaying the black power gesture.

Several hours later, KFC TT returned with another graphic, one filled with balloons accompanied by a caption which wrote, “Happy Emancipation Day (sic) On August 1, 1985, Trinidad & Togabo became the first country in the world to declare a national holiday to commemorate the abolition of slavery.”

The second artwork, also deleted, finally spurred an apology, which indicated, “At KFC Trinidad, we always strive to recognize our nation’s multicultural history and make up, and to play our part recognising it.”

“Our intention was to support and recognise the importance of this historically significant event. We recognise that our posts commemorating Emancipation Day drew some negative responses. Clearly we got it wrong and we want to unreservedly apologise for the offense caused. As a result, we will be reviewing the approval process of all our communications to avoid situations like this reoccurring,” the company added.

KFC Trinidad was slammed for the first imagery, as some felt the artwork sought to profit from the struggles of racial inequality being experienced across the world, but more so amplified in the United States.

Others were not moved by the graphic as they saw nothing wrong with the post, and called out those so offended to not be hypocrites and eat from KFC.

More still, drew comparisons to what KFC’s franchises in Jamaica and Guyana had done to celebrate the occasion, finding those much more in tune with the nature of Emancipation Day and expressed their disappointment in the Trinidad-based company for missing the mark.

KFC Trinidad Getting Dragged for Celebrating Emancipation Day with a Chicken Drum-Black Fist Image Is So 2020
Zack Linly, The Root, August 3, 2020
https://www.theroot.com/kfc-trinidad-getting-dragged-for-celebrating-emancipati-1844594791