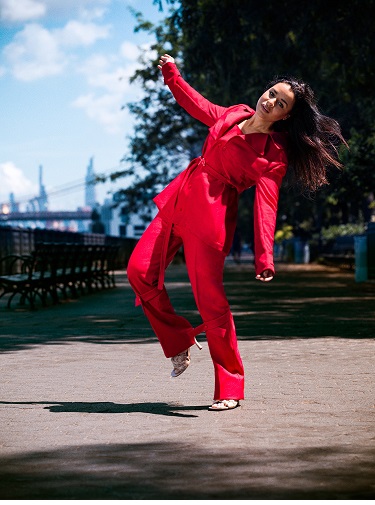 Yohana Desta (Vanity Fair) reviews Jamaican-American writer-comedian Sarah Cooper, explaining that “TikTok’s favorite mimic knows the key to spoofing the president: Just let him speak for himself.” [And here’s a shout-out to my childhood pal Valerie Storfer, who first made me aware of this gifted comedian, providing many a belly-laugh in these difficult times.]

“My husband has to hear Donald Trump’s voice over and over again,” says Sarah Cooper. “I think he’s probably going to jump out the window at some point.”

The writer-comedian occupies an unusual place in our culture: Many of her most ardent fans have never heard her talk. This spring, Cooper started going viral on TikTok and Twitter for her virtuoso Trump lip syncs, satirizing his tackiest and most ludicrous sound bites, such as when he compared himself to Abraham Lincoln or swore he never hid in a bunker. Her acting is as slyly inspired as her lip-synching. In “How to Bunker,” her Trump defends his honor while cowering in the shower and clutching at the curtain.

“I like the idea that I’m inspiring the next generation to make fun of our president,” says Cooper. She’s sitting in a WeWork, in Brooklyn, talking over Zoom and radiating the vibe of an adjunct professor: witty, smart, a dab neurotic. Cooper is wearing the navy blazer from her videos, eschewing orange makeup and tawny wigs in favor of much simpler Trumpian drag. In a few hours she’ll appear on The Tonight Show, where a clap-happy Jimmy Fallon will disintegrate with laughter as Cooper debuts “How to Water,” based on a 2019 interview in which Trump rambled about water conservation: “We’re looking very strongly at sinks and showers and other elements of bathrooms….”

Prior to TikTok ubiquity, Cooper, who’s Jamaican American, was a little-known stand-up and a Google employee regarded around the office as a consensus builder. “I would just repeat what other people said and come to an agreement,” she says. “I didn’t want to rock the boat.” Scroll back far enough into her tweets, and you’ll see she also used to be a prolific reply guy, furiously responding to dozens of Trump’s tweets. (The president blocked her in 2017 for calling him “unfit for office.”) Like many of us, quarantine boredom drove her to TikTok.