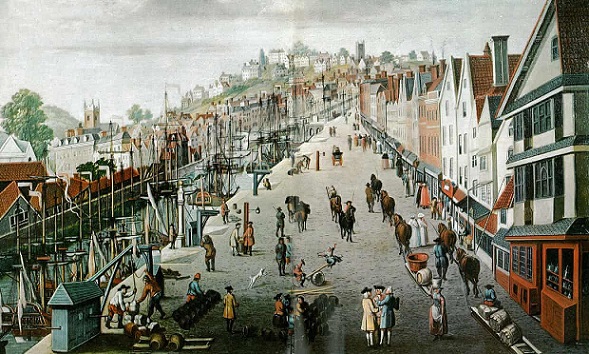 Michael Taylor (The Guardian) offers a refreshing review of Murder on the Middle Passage by Nicholas Rogers. The book focuses on slavery and the British empire—mapping a triangular voyage from Bristol to the western coast of Africa, to Grenada—all in the context of the looming Haitian Revolution. Taylor writes, “An atrocity unpunished … forget the triumphant tales of abolition – the brutal death of a teenage slave girl reveals important truths of Britain’s imperial history.”

You are trapped in a net cast by a white man reeking of rum and smoke, and then dragged miles to the coast. You are processed, bound into chains, and led to vast wooden ships. You are packed into the hold and spend months on the ocean. You have little to eat, little to drink, little air to breathe. All around you there is coughing and fever. On deck, they make you dance to keep your muscles taut, to preserve your price at the market. If you resist, they will beat you; if you die, they will throw you overboard.

In time, you see land. You are paraded on the dockside, prodded and inspected. They feel your arms; they look at your teeth. One man says “Yes”. You are loaded on to a cart and driven over rough land along dirt tracks until you arrive at a house and fields. You suffer searing pain as a burning iron pushes into your skin. You are taken to a shed and thrown to the floor. You collapse and sleep, but the sun rises and then you work. You have not done this work before, but if you do it badly, they will whip you. If you complain, they will whip you again. If you refuse to work, or you fight back, they will kill you in front of the others. So, you work.

This was the life to which British planters and merchants subjected millions of African people from the late 16th century to the 1830s. These are the truths of slavery within the British empire. And yet, as Nicholas Rogers shows in his micro-history, Britons were capable of even worse.

The antagonist of Rogers’s tale is John Kimber, a veteran of the slave trade who in 1791 skippered the Recovery, a near-200-ton ship, from Bristol to the slaving coast of west Africa. Kimber’s first major crime on this voyage came at New Calabar in the Niger Delta. On finding that the locals would not provide him with either slaves or water, Kimber and his fellow British captains – two more from Bristol, three from Liverpool – bombarded the town. As Rogers tells us, the British sailors believed that “a good volley of cannonballs … would resolve outstanding contracts and force down the price of slaves.” This prediction proved correct.

Back in London, the news of the attack caught the attention of the group of philanthropists who, since 1787, had been campaigning for the abolition of the trade that Kimber practised, under the political leadership of William Wilberforce. For Wilberforce, Kimber’s actions were nothing more than “bloody and inhuman butchery”. It was during his brief investigation of the New Calabar outrage that Wilberforce learned of the murder onboard the Recovery that dominates Rogers’s book.

It is trite to describe life on a slave ship as hell; as the historian Marcus Rediker has put it, there is no way to quantify horror. Even so, Rogers gives vital, awful details of the conditions that prevailed on British slave ships. There was piss and shit and blood, and plenty else besides. John Newton, the clergyman who wrote “Amazing Grace” and a former, repentant slave trader, recalled that “when the women and girls are taken on board a ship, naked, trembling, terrified … they are exposed to the wanton rudeness of white savages”. He lamented how one of his sailors had “seduced a slave down into the room and lay with her brutelike in view of the whole quarter deck”. The former slave merchant and adventurer Olaudah Equiano had also witnessed sailors “gratify[ing] their brutal passions with females not 10 years old”.

Kimber’s victim in this case was a girl only slightly older. Since her enslavement and imprisonment on the Recovery, the girl had been raped, brutalised and inflicted with a severe case of gonorrhoea; of course, the blame for the spread of the disease was attached to the African women on board, not to the British sailors. When the girl would not “dance” with the other enslaved Africans, Kimber flogged her daily with whips and ropes. Soon, she was struggling to walk, suffering from a crooked knee. This presented Kimber with a problem: if the girl was infirm, she would fetch a much lower price when the ship docked at Grenada.

Kimber’s “solution” was atrocious even by slaving standards. From the mizzen-mast of the ship he strung the girl up by her “bad” leg, then her other leg, and then by her arms. In each position he whipped her. The ordeal lasted half an hour, after which the girl crawled to the hatch, fell down the stairs into the hold, collapsed, convulsed and died. “The bitch is sulky,” Kimber concluded. There is no record of her name, her story, or her family; accordingly, and disturbingly, she is referred to as “No-name” throughout this book.

After denouncing Kimber in parliament, Wilberforce quickly brought charges of murder before the High Court of Admiralty, which was the only place to try a man for alleged crimes committed on the high seas. It is the result of this trial and its aftermath, rather than Kimber’s brutality, that say most about Britain’s historical attitude towards slavery.

With the slaveholding West India Interest mustering an array of witnesses who spoke to Kimber’s supposedly good character, the judge, Sir James Marriott, simply stopped the trial and directed the jury to find the accused not guilty. Even more perversely, Marriott immediately charged the prosecution’s witnesses, two members of Kimber’s crew who had testified against the captain, with perjury: one of them was convicted and sentenced to transportation.

As for Kimber, he tried to sue Wilberforce for damages but contented himself with lurking menacingly outside the abolitionist’s London home; only the intervention of the Earl of Sheffield put an end to the stalking. Growling, Kimber returned to the slave trade.

How could the British judicial system acquit a man of such crimes? How far did Kimber’s monstrosity characterise British traders overall? Indeed, if Britain was the liberal bastion of abolitionism and philanthropy that is often imagined, how could such a killing not have caused a greater furore?

As ever, context is everything. The Haitian revolution had begun in 1791, jeopardising the future of slave colonies across the Caribbean; by the next year, the French Terror was in train; and the slave trade was still a vital artery running through the core of the British empire. To chastise Kimber and to prosecute men of his ilk was considered dangerous – commercially, politically and strategically. These were the same concerns that would forestall abolition until 1807.

This was the cold and callous pragmatism that informed so much of British imperial policy; there was no room for sentiment here, and this is the world that Rogers exposes in recounting the death of a teenage girl. It is this history – and not the triumphalist accounts of abolition and later emancipation – that we must heed; it is this history that reveals the darker, shameful, but essential truths of our imperial past.