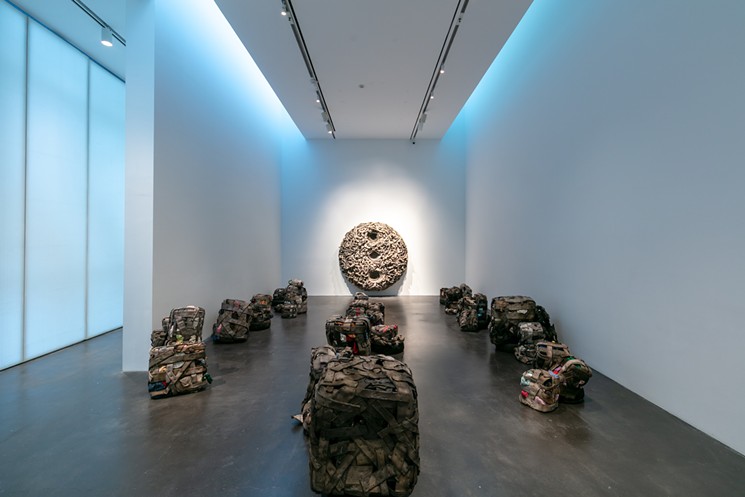 A review by Susan Froyd for Westworld.

Nari Ward builds large-scale sculptural essays on human rights and social justice out of shoelaces, keys and baseball bats, yet he defies the easy label of found-object installationist. While the Jamaican-born, Harlem-based artist does utilize everyday materials that might be reclaimed from the street, his building blocks of choice aren’t necessarily so random.

“That overlooks some content or narrative that triggers the journey; it’s more about the kind of materials themselves,” Ward explains. “A lot of the time, my materials are overlooked or seen so much that they’re taken for granted, but there’s something about using them that animates them to tell a story — by using the familiar to bring the viewer into another experiential space.”

In this day and age, that sometimes requires the help of eBay or other online materials sources. “My experience twenty years ago was that is was easy to find materials, and they could all be gathered on the street. There was no eBay then. Now, if I was out on an adventure, it wouldn’t be as easy — it’s a different system. In the Harlem of the ’90s, I could count on something staying in an empty lot for two weeks,” he recalls. “Now when I find one thing I need in this era, I can find twenty more like it on eBay.”

This becomes clear when you eyeball the work. MCA Denver’s new exhibition, Nari Ward: We the People, a survey of the artist’s powerful statement pieces from over the decades, teases both senses and sensibilities from afar and up close, as you realize that the physical works comprise big ideas built piece by piece, grain by grain, out of the salt of the earth.

The resulting stories in an exhibition planned months ago (with some pieces dating back to the ’90s) couldn’t be more relevant at this very moment, when the issues behind Black Lives Matter are on everyone’s mind. The pressing issues of the immigrant experience, the widening American class divide and systemic racism are all referenced in works like “Amazing Grace,” a junk-heap of discarded baby strollers left like beach detritus by the side of a flimsy boardwalk, some wrapped in a net of twisted hoses, or the monolithic “Iron Heavens,” made partly from charred bats slicked over with cotton and sugar to evoke slavery and the roots of white supremacy.

Ward, an avid music lover of everything from “reggae to classical to jazz to new age,” also uses sound in various sculptural environments. Walking through “Amazing Grace,” you’ll hear the gospel hymn while looking at a landscape eliciting a sense of waste, overcrowding and life on the other side of the tracks. And 2008’s “Glory,” a tanning bed created out of an oil barrel that’s designed to tan the American flag on a body, includes a recording of a parrot singing “The Battle Hymn of the Republic.” Its inclusion was Ward’s chance solution to lighten up a piece that could be darkly misconstrued as a kind of coffin.

“I felt like I wasn’t telling the right story,” he recalls. “Then I was on holiday at a friend’s country home with my whole family, and my daughter was playing this recording of how to teach a parrot English. There was a strange redundancy in that for me, and I thought, ‘This is it, what I needed,’ and that parrot singing ‘The Battle Hymn of the Republic’ was a godsend that became part of the piece. The idea of parroting and mimicking is a metaphor for acculturation, and that idea is integral to ‘Glory.’ This thing that I found by chance lightened the piece.”

Harlem, where Ward has lived and worked for decades, is also a wellspring of ideas and activism for the artist. He says that while the nostalgic notion of the Harlem Renaissance has given way to the not-so-beautiful realities of gentrification and economic polarities, Harlem’s densely urban energy also leaves behind plenty of refuse, leaving him to cross one with the other. “You see things you might not see in places where there’s more of a landscape,” he explains. The result of that conflation is visible in his signature transformation of ordinary materials.

“Thinking about it, I wanted to try and talk about this strange relationship in American history: Policing in the U.S. came out of slave-catching,” Ward says. “White males were hired to capture slaves. There were so many of them, and that was a way to control them. That whole profession came out of that consequence. “But what about black policemen? How do they fit in?” he speculates. “’Father and Sons,’ about a black policeman and his two sons, riffs on the irony of the situation, and how we still see the racist consequences of that relationship between policing and the real endangerment black citizens encounter today.

“African-American history is actually American history,” he adds. “It’s time to recognize and call it that. I use these different languages and codes — the symbols that are part of American history — in my works. It’s about bringing that to the forefront, in the moment, as shared experiences.”

Ward doesn’t believe that these politicized works should only have power in the museums or galleries where they are displayed. He wants to send a message through his sculptural scenarios that might enlighten viewers and change someone’s mind, no matter where they are. “I use the platform of the gallery and material engagement and try to make something happen outside the museum,” he explains.

Nari Ward: We the People is currently on view at MCA Denver, 1465 Delgany Street, from 10 a.m. to 8 p.m. Tuesdays through Sundays, through September 20; Mondays from noon to 5 p.m. are reserved for MCA members only. Reservations for timed-entry tickets are required in advance online; find information and upcoming events in conjunction with the exhibition online.

Nari Ward’s work will also appear on digital surfaces around downtown Denver along Speer Boulevard, as well as 14th and 16th streets. A new digital work by Ward, titled “LAZARUS Beacon,” based on poet Emma Lazarus’s “The New Colossus,” the sonnet on the Statue of Liberty, is included in Night Lights Denver’s free stories-high art projection series on the side of the Clocktower, where it is visible Tuesdays through Sundays; visit the website for information and changing viewing times.