A report by K. D. Anglin for Urban Islandz.

Bob Marley music is doing what it was meant to do, heal the world in a time of crisis.

If you were to go around the world mentioning the island of Jamaica, one of the first people who most would think of is Bob Marley. He is not just the most famous person to ever come out of the largest English speaking Caribbean island. The reggae legend is a global icon on all accounts and has remained the epitome of immortalization in history and music. Similarly to many times in history, Bob Marley’s songs are thematic to the uprising that we are currently witnessing. No matter the year, Marley’s music seems to have perpetual relevance, and even now, as we face these crucial times in the world, fighting for racial equality, his catalog, which champions for social justice, has never been more entertained.

Marley’s timeless music has historically been a place of solace for people around the world, especially during times of civil unrest. His records are known for being laced with conscious messages surrounding spirituality and morality and social and political satire. In “I Shot The Sheriff” from 1976, Bob takes justice into his own hands against authorities. Its symbolism is not lost on the current prevalence of police brutality in the United States and other parts of the world. In 1974, Bob Marley explained the meaning behind the lyrics in an interview. “I want to say ‘I shot the police’ but the government would have made a fuss so I said ‘I shot the sheriff’ instead,” he said. “But it’s the same idea: justice.”

A year later, he elaborated that “Sheriff” was a metaphor for wickedness and can be interchanged with any oppression you’re facing at the time. “I Shot The Sheriff’ is like I shot wickedness,” Marley explained in 1975. “That’s not really a sheriff, it’s the elements of wickedness. The elements of that song are people been judging you, and you can’t stand it no more, and you explode, you just explode.” This likely echoes the recent cries of many black Americans and people around the world facing racial discrimination or being wrongfully judged by the color of their skin.

Bob Marley’s words, which were current affairs then and should be history now, have become the epitome of relevance today. The same issues outlined in his songs are still prevalent in our current society, even if swept under the rug. It seems, however, that incidents like George Floyd’s unlawful murder tend to remind us of just how much Marley’s words ring true. So true that since the impactful tragedy, Bob’s streams have risen above recent plateaus.

With the onset of protests for social justice happening across the globe and the concurrent quarantine period, more people are looking to his music for wisdom and empowerment. While there has been a significant decline in global streaming overall at the hands of the current pandemic and various world crises, Marley’s discography has seen a spike in streams during the lockdown. In the first three months of the year, Marley reportedly accumulated over 1 billion streams around the world. Globally, his streaming numbers surged up 23.2% in April. Songs like “Burnin’ & Looting” and “War” resonate with the current racial unrest and social injustices prominent today.

“Until the philosophy which holds one race / Superior and another Inferior / Is finally and permanently discredited and abandoned / Everywhere is war / Me say war,” Bob Marley sings in “War” from 1976 quoting the great Haile Selassie I. 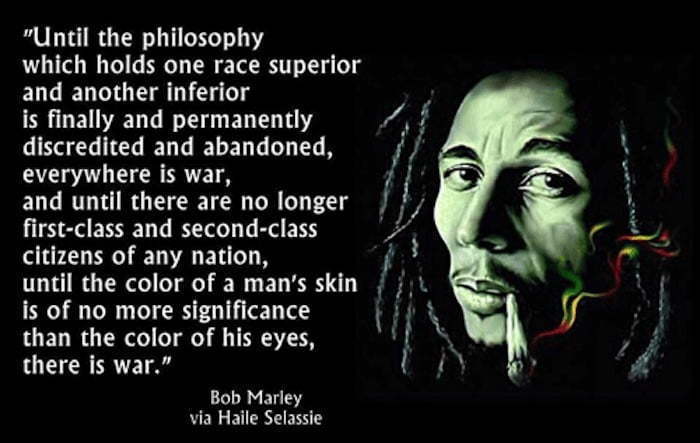 Bob Marley’s music has always spoken to us in a way that makes us want to change ourselves and the world. As they say, history tends to repeat itself, which keeps the pertinence of his songs on a constant rotation. Marley is not only still being streamed today, but he also remains a constant feature on the Billboard charts almost 40 years after his death. The world-renowned icon still tops the Billboard Reggae Albums chart regularly in addition to making notable appearances on other legendary rankings like the Year-End Charts and Greatest of All Time. His album Legend is the second longest-charting album in chart history coming in at No. 37 this week on the Billboard 200 in its 630th week on the tally.

Currently, an extension of that record, Legend: The Best Of Bob Marley And The Wailers, is sitting comfortably in the coveted No. 1 spot on the Billboard Reggae Albums chart and has been fixed at that position for 23 consecutive weeks. The original Legend was released in 1984, but the producing label Island Records often releases remakes of the compilation to sometimes include additional songs and remastering. Legend is certified Diamond by the RIAA and is currently 15x Platinum. In 2014, the title peaked at No. 5 on the Billboard 200, further decorating Marley’s accolade for the highest-charting Jamaican artist in history. Legend sells about 3000 to 5000 copes each week, according to Billboard. Some of the songs from the album of much relevance in today’s political climate are “Get Up Stand Up, “Redemption Song,” and “Buffalo Soldier.”

When he was alive, Marley’s music chronicled the social issues of the time, chief among them – the mistreatment of Africa and its people all across the world. Bob Marley was even requested by Zimbabwe to perform at the ceremony celebrating their newly gained independence in 1980. It was as if he symbolized the values with which they wanted to build their new country. His music did so much for the world while he was alive and so much more now decades after his death.

Bob Marley was more than just a rockstar, he was perhaps the greatest musician ever lived. He was a staple in the industry and the wider society with unparalleled influence. After all, when Jamaica was going through civil unrest attributed to political tension coupled with mass poverty, it was Bob who turned the tide. His One Love concert at the national stadium in Kingston in 1978 symbolized a new beginning in Jamaica. He even got rival party leaders Edward Seaga and Michael Manley to hoist each other’s hand in the air as a sign of solidarity to the people of Jamaica. Marley’s politically progressive artistry did not go unnoticed by members of the higher society and people of profound power. He was a targeted black figure who has even taken bullets for the cause, which only serves to add more gravity to what he preaches.

Bob Marley is still one of the most famous people in the world and perhaps one of the most historic musical legacies, but what was most important was the justice he spoke out for, the racial equality he championed, and the “one love” and unity he represented. With the political and racial tensions in the world today, it’s no wonder his music has had a huge boost in streams considering its authenticity and social awareness. They say legends never die, and upon listening to Bob Marley’s catalog from the ’70s and ’80s, you will find that it is as if he composed it in 2020.