Bermudian-born actor rose to prominence in the 1950s in films such as Pool of London and Sapphire, as well as appearing in the 007 film Thunderball

A report by Andrew Pulver for London’s Guardian.

Earl Cameron, who with his debut role in the 1951 film Pool of London, became one of the first significant black actors in British cinema, has died aged 102. His agent confirmed the news to the Guardian, saying “he passed away peacefully at home surrounded by his wife and family” on Friday in Kenilworth in Warwickshire.

Cameron’s significance to the current generation of black British actors was underlined by tributes on social media. David Harewood described him as “a total legend”, while Paterson Joseph wrote: “His generation’s pioneering shoulders are what my generation of actors stand on. No shoulders were broader than this gentleman with the voice of god and the heart of a kindly prince.” Historian David Olusoga added: “A remarkable and wonderful man. Not just a brilliant actor but a link to a deeper history.”

In a statement, Cameron’s children said: “Our family have been overwhelmed by the outpourings of love and respect we have received at the news of our father’s passing … As an artist and as an actor he refused to take roles that demeaned or stereotyped the character of people of colour. He was truly a man who stood by his moral principles and was inspirational.”

Born in Bermuda in 1917 and arriving in the UK in 1939 after a spell in the British merchant navy, Cameron ended up with a small role in 1941 in a stage production of the musical Chu Chin Chow. More theatre work followed after the war, and Cameron was then cast in a substantial role in Pool of London, a thriller set in the London docks in which he played Johnny Lambert, a merchant seaman. Cameron’s character is also involved in a mixed-race relationship, generally acknowledged as the first such portrayal in a British film.

In 2017 Cameron told the Guardian: “I never saw myself as a pioneer. It was only later, looking back, that it occurred to me that I was.” Cameron was cast in Sapphire, another British-set thriller, in 1959, Britain’s best-known contribution to the “passing” genre; he played the brother of a woman found dead on Hampstead heath, who is discovered to be mixed-race. Other roles in the 1950s included two films about the Mau Mau uprising: Simba (1955), where he played a doctor, and Safari (1957) in which he played a rebel commander.

However, Cameron found work hard to come by, telling the Guardian: “Unless it was specified that this was a part for a black actor, they would never consider a black actor for the part. And they would never consider changing a white part to a black part. So that was my problem. I got mostly small parts, and that was extremely frustrating – not just for me but for other black actors. We had a very hard time getting worthwhile roles.” 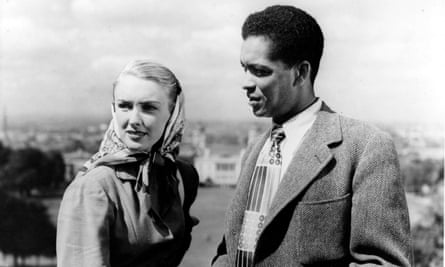 Cameron was given a small role in the 1964 James Bond blockbuster Thunderball, as Bond’s local contact in the Bahamas – having been considered and then passed over for the larger role of Quarrel in the first Bond film, Dr No (1962). He also had a significant part in the 1964 post-colonial thriller Guns of Batasi, in which he played the wounded commander of a British army unit besieged by rebels in an un-named African state.

However, Cameron was able to secure regular work in TV, including the lead role in The Dark Man, a 1960 BBC drama about an immigrant taxi driver, and guest appearances in Danger Man, The Prisoner, Dixon of Dock Green, The Zoo Gang and Lovejoy. Cameron also appeared in the celebrated Tenth Planet episode of Doctor Who in 1966, which introduced the Cybermen, as one of the astronauts in the doomed Zeus IV spaceship.

He became committed to the Baha’i faith in the early 60s and subsequently moved to the Solomon Islands; after returning to the UK his acting career experienced a revival, with a key role in the 2005 United Nations thriller The Interpreter as an African president accused of war crimes. He also had small parts in the Helen Mirren film The Queen and Christopher Nolan’s inception.

Cameron was married twice; his first wife Audrey died in 1994, and he is survived by his second wife Barbara. He was awarded the CBE in 2009.