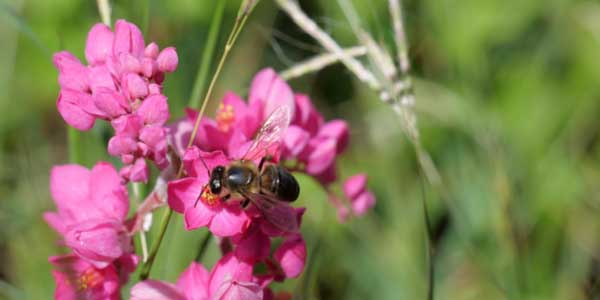 Saba-News reports on scientific studies by researchers from the Vrije Universiteit Amsterdam that show the impact of the invasive plant coralita on insect and spider communities on Sint Eustatius. In Mexico, where the plant is endemic, it is controlled by droughts and poses no threat. Here is the full article from Saba-News.

A study by researchers from the Vrije Universiteit Amsterdam shows that the invasive plant coralita and urban development have led to large, distinct changes in insect and spider communities on Sint Eustatius. Hence, coralita is not just a result of urban development but are also a driver of change. Recovery of native vegetation is needed to maintain biodiversity.

Coralita invasion
It’s a beautiful and colorful plant, but so dominant! The colorful plant coralita, also known as Mexican creeper plant or coral vine (Antigonon leptopus), was introduced as an ornamental plant on Saba, Sint Eustatius and many other Caribbean islands. Alarmingly, the invasion of coralita has led to a total change in animal communities on Sint Eustatius. This plant originates in Mexico, where it poses no threat since its numbers are regulated by droughts. However, on humid islands like St. Eustatius, it can grow unchecked. It spreads both horizontally on fields and vertically against all kinds of objects. In addition, goats prefer to eat native grasses and do not eat coralita unless they are forced to from an early age.

Studying the impact of urban development and coralita invasion PhD scientist Wendy Jesse and Masters student Jasper Molleman of the Vrije Universiteit Amsterdam, together with a team of researchers of the Vrije Universiteit Amsterdam and Temple university in Philadelphia, studied the individual and combined effects of urban development and coralita invasion on the insect and spider communities on Sint Eustatius. During this study the complete arthropod community was assessed within 36 paired coralita-invaded and non-invaded sample plots in urban and natural ecosystems. These results were recently published in the scientific paper Global Change Biology. ‘There are only a few studies that manage to assess both factors separately’, claims Wendy Jesse. ‘That was possible in this case because this invasive plant is very abundant and occurs everywhere, both in urban areas of Oranjestad as well as in and around the long abandoned agricultural plots around the dormant Quill-volcano. As much as 33% of the island is entirely or partially overgrown with coralita.’ explained Wendy Jesse.

The PhD research of Wendy Jesse on Sint Eustatius is part of a Netherlands Organization for Scientific Research (NWO) project about bioinvasions on the Dutch Caribbean Islands and is coordinated by the Vrije Universiteit Amsterdam.

Results
A total of 4,690 spiders and insects were captured. Within 2 months, the team completed the enormous task of identifying and assigning each specimen to one of six feeding guilds based on their dietary habits: herbivores, nectarivores, predators, parasitoids, detrivores or omnivores. In total 185 species were identified and classified. ‘Our results show that urban development increases species richness as well as the diversity of individuals divided over species, the so called abundance-weighted or Shannon diversity. Invasion by coralita mostly caused increased occurrence of certain feeding guilds, with extraordinary quantities of nectarivores, herbivores and detrivores. This causes biotic homogenization of insect and spider communities which simply means that you get more of the same’, explained Wendy Jesse. Invasive species, like coralita, are thus not just a result of urban development but are also a driver of change themselves.
Safeguarding biodiversity

Because insects and spiders provide important ecosystem services like pollination, decomposition and nutrient cycling, and serve as a food source for native reptiles and birds, such an invasion has big consequences for the environment on Sint Eustatius. In earlier research the same group of scientists have shown that when coralita appears reptiles such as anolis lizards disappear. Without the recovery of native vegetation, the loss of biodiversity on the Dutch Caribbean Islands is likely.

Report your sightings
Please report any sightings or photos you have of plants, insects and spiders on https://dutchcaribbean.observation.org. This is a free website and app (iPhone (iObs) & Android (ObsMapp)) which allows local citizens to report sightings of plants and animals. These tools are available in over 40 languages and can be used by biologist and citizens and tourists alike. Species
reports by local communities are invaluable for nature conservation efforts to help increase public awareness and overall species protection. Besides, Observation.org is working together with Naturalis Biodiversity Center on automated species identification software. Your uploaded photos are of great value to make this possible. For questions, please contact research@DCNAnature.org.