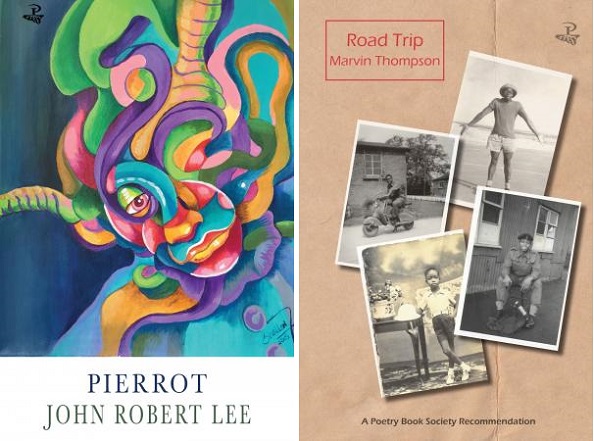 Sometimes the stanzas of a poem remind us of the strips of cloth of the pierrot: their rectangular shape, their varied lengths, the way they hang in one direction. With their multiple images, colours, textures, and tones, the individual lines of a poem, too, enact this variety. Each has a different weight, though each must absorb and be absorbed into the whole.

This is a good place to start when considering how poetry often attempts to make sense of the world. A poet might seek to parse experience. Or they might array things into a mosaic purely to create a difficulty that generates pleasure. Or they might write through a process or constraint. Or all of the above.

In two recent books, we discover Caribbean poets grappling with the idea of Caribbean identity in a manner that draws upon the line as a useful resource.

At the heart of St Lucia-born John Robert Lee’s Pierrot (for the purpose of this review we need not consider the differences between the pierrot and the pierrot grenade, though the poet shows awareness of this) is the idea of art inspiring art. Here is a book in dialogue with painting, with sculpture, with photography, with music, with writing. This alone makes us pause, question what is art and how it relates to posited things and the ever-changing world. “Some would say all poetry is ekphrastic,” the poet muses.

The cloth is cut from poets and their poems too. The first half of the book features pieces that deploy a form known as the glosa, in which the poet inserts lines between those of another poet’s four-line stanza. Here, the stanzas are taken from figures like Derek Walcott, Dionne Brand and Francis Thompson, as well as the Psalms.

A glosa stanza normally swells to ten lines, but John Robert Lee breaks these into smaller tercets or units, and inserts section headings that cut into and weave them. This creates the sense of the reader becoming implicated in crossings and transgressions. [. . .]

The deployment of these manoeuvres fits the mélange of the Caribbean; mirrors its cosmopolitan nature and history; reveals the pierrot the poet has in mind – a political personification of a region that is contradictory. Side by side they stand: the wise and the foolish, the ugly and the beautiful, the promising and the doomed, the sacred and the profane. This is a writer concerned with “the collage of Atlantic surf,” the “Caribbean vernacular” and “ossuaries, yes, of failed states and their politricks.” [. . .]

[. . .] Overall, there is a transformation that, if not celebratory, runs against the tide. So the Mighty Shadow, who wore all black as he sang against the cultural hegemony of the colonial, is re-born in these rich, reflective pages as a “prancing pierrot.” [. . .]

Whereas pierrot’s lines sprawl across the page, Marvin Thompson’s tumble like a waterfall. In Road Trip, a stunning, unforgettable book with a strong sense of place, some of the best moments come from how the poet, who lives in Wales but was born in London to Jamaican parents, deploys skeltonic verse of increasing intensity. The opening lines are short, just a few syllables, and paired. But the deeper we go, the more echoes and rhymes begin to emerge, as though the accretion of musical experience itself. Call it jazz.

Like Lee, Thompson is concerned with the Caribbean self, but from the perspective of someone on the other side of the Atlantic. For this poet, it is the loss of a father, something which hurts particularly at Christmas time, that is the beginning of his inquiry.

As is the case in Dylan Thomas’s wonderful Christmas broadcast, Memories of Christmas, Thompson sets the scene for but does not deliver a trite, sentimental yarn. We get something complex. A dead father comes back to life, stepping from a mirror “in three strides.” The brevity of the lines, some of which have three words, echoes the movement of this apparition, and the white space hemming the text to the left might well reflect the supernatural atmosphere. [. . .]