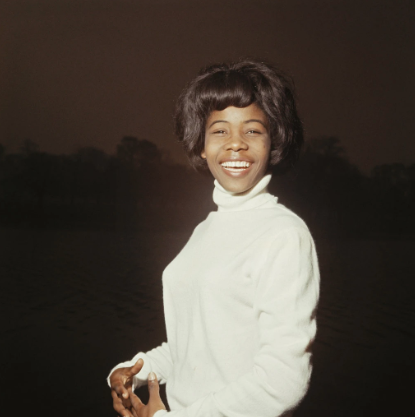 An obituary by Steven Kurutz for The New York Times.

Her 1964 smash hit was a breakthrough for Jamaican music. But she later became “one of the most elusive performers in pop history.”

Millie Small, the Jamaican singer whose 1964 hit, “My Boy Lollipop,” introduced the upbeat rhythms of ska to international audiences, died on Tuesday in London. She was 73.

Her death was announced by Chris Blackwell, the founder of Island Records and the song’s producer. The announcement did not specify the cause, but Mr. Blackwell told The Jamaica Observer that Ms. Small had suffered a stroke.

Although “My Boy Lollipop” was Ms. Small’s only major hit, reaching No. 2 on both the American and British charts, it was a significant one. It was a turning point in Jamaican music that brought the island’s signature sound to a wider audience, opening the door for artists, like Bob Marley, who would popularize ska’s rhythmic successor, reggae.

“My Boy Lollipop” was the first big success for Mr. Blackwell, whose Island label would go on to release music by Marley, Toots and the Maytals, Roxy Music, U2 and others.

As ska’s breakthrough act, Ms. Small was a global ambassador with a spunky personality and a distinctively high-pitched, pneumatic singing voice. Just 17 and a country girl, she toured the world with Mr. Blackwell as her chaperone, performed at the 1964 New York World’s Fair and became a star in swinging London, where her vivaciousness and her dancing captivated television audiences.

“The ska sound was starting to filter through in the U.K., but there was no personality who looked great,” the British journalist Vivien Goldman, an authority on Jamaican music, said in a phone interview. “Millie was sassy, she was sparky, she had that effervescent quality.”

Millicent Dolly May Small was born on Oct. 6, 1946, in Clarendon, Jamaica, where her father worked in the sugar cane fields. She was already a veteran recording artist when she connected with Mr. Blackwell. After placing second in a singing contest in Montego Bay at 12, she began recording for the pioneering producer Coxsone Dodd’s Studio One Label, scoring hit records with her fellow singer Roy Panton. Their 1962 duet, “We’ll Meet,” released under the name Roy and Millie, caught Mr. Blackwell’s attention.

Mr. Blackwell brought Ms. Small to England, put her in the studio and suggested that she sing “My Boy Lollipop,” first recorded in 1956 as an R&B shuffle by a white American singer, Barbie Gaye. Ms. Small’s cheerful, up-tempo ska rendition — arranged by the great Jamaican guitarist Ernest Ranglin — added punchy horns, a bluesy harmonica solo (by Rod Stewart, according to urban legend, though Mr. Stewart has said it wasn’t him) and Ms. Small’s irrepressible vocals. It sold six million copies worldwide.

Other recordings followed throughout the 1960s, as did tours. But Ms. Small was soon to become “one of the most elusive performers in pop history,” as the music magazine Goldmine said in a 2016 feature.

She stopped recording after her album “Time Will Tell” was released in 1970 and gave no interviews for decades, except for a brief appearance on British TV in 1987, in which she said she had been sleeping in a hostel with her infant daughter because she had no money.

In the Goldmine article, perhaps the only in-depth interview of her career, Ms. Small looked back matter-of-factly on “Lollipop” and its influence.

“I just saw it as a song that had become a hit somewhere, honestly,” she said. “It seemed so natural. I had the hit, I toured the countries and came back to England, and that was that.”

Ms. Small lived most of her adult life in England. She is survived by her daughter, Jaelee Small, a singer based in London.